Hopefully the passing of the summer solstice today will bring a change in the weather. Although rain clouds have formed on numerous occasions over the last month only a few short showers of a millimetre or two have fallen. The hot sun has parched the grass and in the rain forest the leaves are falling from the trees and you can see deep into the forest where normally it is clouded in shadows and obscured by leaves.

The animals are very thirsty and wallabies are coming into the nursery to eat the little bit of green growing where the irrigation reaches. Over the years I have learnt to live with the wallabies and have built the nursery benches up out of their reach and have placed other areas of the nursery behind fences. It breaks my heart when I hear of wallaby culls in suburbia at Mission Beach because some people have complained they don't like wallaby poo on their lawns:............ and this complaint is justification to order a cull to kill the wallabies! Then there is the proposed cull of hundreds of wallabies from Ella Bay now the development has been approved. 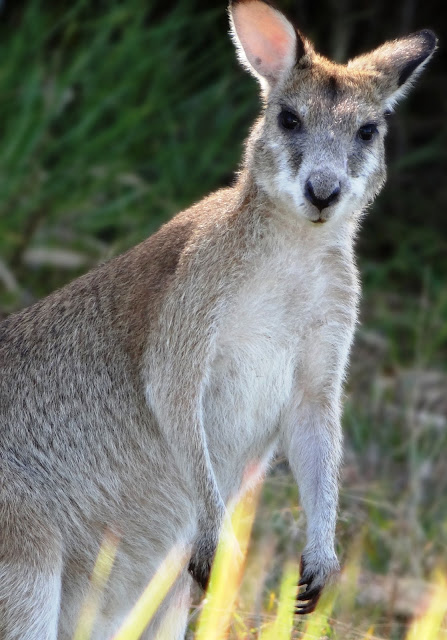 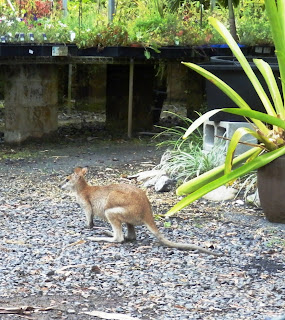 A young wallaby looks for water in the nursery.
The birds are also very thirsty and I was astonished to see a female Indian Koel land within a few metres of me, she turned her head from one side to the other, gave me a good look, then dropped down onto the edge of a  waterlily pond and for a good ten minutes drank deeply. 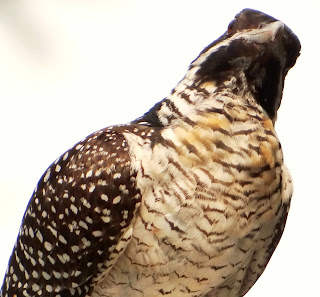 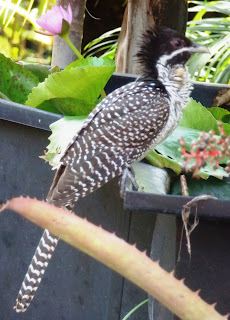 She then dipped her head under the water and started to wash her feathers.
Bath finished, the Indian Koel moved to a branch to dry out. 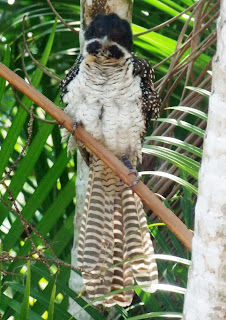 She has been coming back for a drink and a bath every day or so and doesn't seem bothered by us working around her. The male has not come in for a drink but I hear him calling loudly for rain every morning, after all they are called the storm birds. What a privilege to interact with this normally timid, wild bird.
The Cassowaries are also heat stressed and clever Snout has made a wallow in a nursery drain. He stands for hours in the water, his strong leathery legs built for swamp foraging. 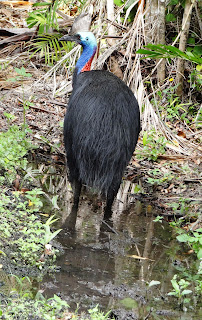 The damson plum Termminalia sericocarpa is fruiting and the metallic starlings, pigeons and fig birds are having a feast. If you stand under the tree when the birds are feeding hundreds of fruits are knocked to the ground, it sound like large raindrops falling on a roof. Within minutes the cassowaries arrive drawn to the noise of the feasting sounds of the birds and the sounds of falling fruits.
Jessie runs to the sound of falling fruits. 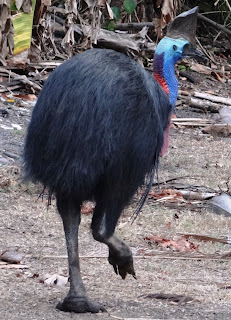 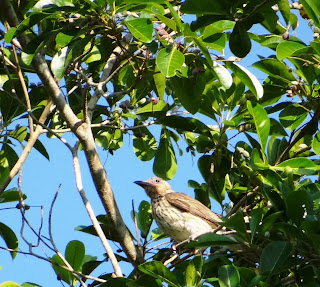 A female fig bird feasts on the fruits of the
damson plum Termminalia sericocarpa, while nearby an adult metallic starling chatters to young birds which have left the nest for the first time..
Large numbers of  juvenile metallic starlings 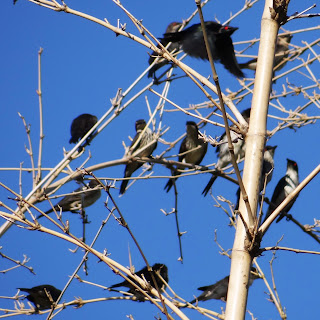 have fledged and it is interesting to watch how the older birds teach the juveniles where to feed.
Starlings leave their nests in mass and quickly form a dense formation swirling over the rain forest
canopy. The birds land on a tree close to the food tree, the parents chatter to the young birds then in one movement they move into the food tree and feast.
On the rain forest floor the native 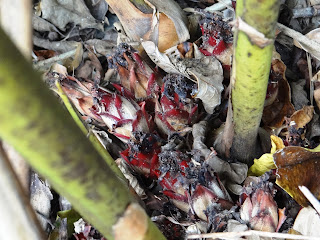 cardamon, Hornstedtia scottiana is flowering. This plant along with the damson plum
are important aboriginal food plants of the rain forest peoples of the Wet Tropics.
A delicious jam or chutney can be made by cooking the damson plum and native cardamon together
with a couple of cups of sugar. Strain to remove the seeds. 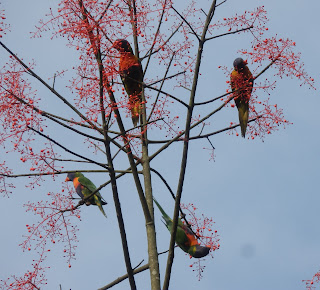 The rain forest canopy is dotted in red as
the flame tree Brachychiton acerifolius opens its nectar laden, red bell flowers. The nectar eating
birds like these rainbow lorikeets noisily enjoy the feast.
Christmas bells of the flame tree. 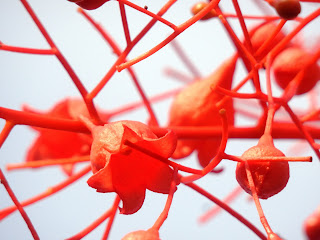 I was watching a St Andrew's Cross spider neatly 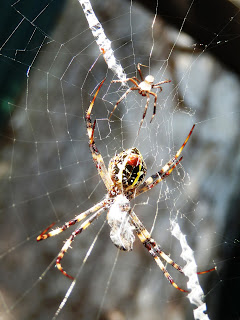 bundle a beetle it had caught in its web. Suddenly the male approached, she ignored him so  he moved to the side of the web  where it was broken from the beetle, he strung a silk line and started pulling on it like a violin string. 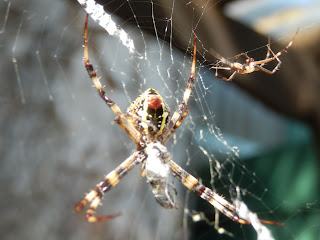 She was not impressed and pounced on him. 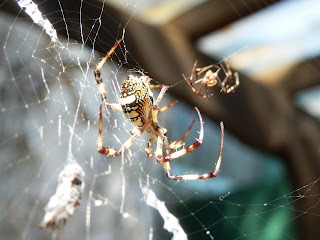 In a flash he turned and escaped on his mating thread. Did he want to share her meal, mate or both who knows? Its a dangerous life for some male spiders. 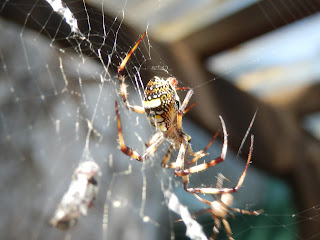 The male stick insects are also smaller than the females. I found these two mating in the nursery. 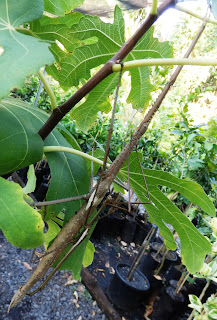 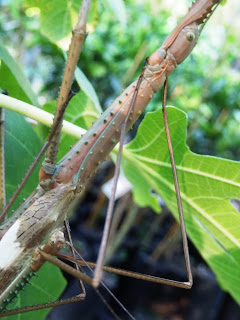 The bright green armour of the male stick insect was
studded with green spikes - a strange creatures of the rain forest.
Many birds in the rain forest have loud 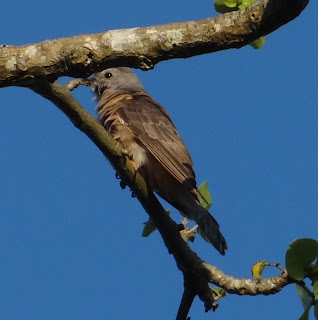 penetrating calls and none more so than the brush cuckoo. Very early in the morning this medium sized bird finds a high vantage point on a tree branch and calls loudly in a frenzied, ascending eh.eh..eh..eeeh. announcing her presences to the world.   Before  one can identify her whereabouts the brush cuckoo quickly shifts to another tree. For some time I have been trying to photograph her and above is my best attempt so far. In the Wet Tropics the brush cuckoo lays her eggs in the brown-backed honeyeater's nest, a bird half its size and so its has had to learn to creep about stealthily. 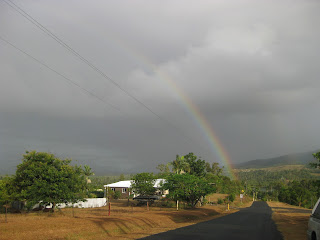 Early this morning a rainbow fell over the nursery, I did not see it however, my neighbour Diana O did and sent me this photo of the end of the rainbow. What a shame I missed the pot of gold. Thank you Diana.
My very best wishes to you and your family and I join with my friends of the Cassowary Coast Alliance to send seasons greetings to all. Please click on the CCA link in the right hand tab and go to - season's greetings - for a pictorial snapshot of the natural wonders of the Cassowary Coast including Coquette Point.
Yvonne Cunningham. 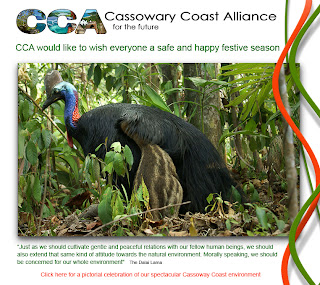