The suspense leading up to the solar eclipse on the 14/11/12 could have been written by Alfred Hitchcock. Dark clouds gathered on the days before the event and the weather gurus held very little hope that we, on the far northern coast, would have clear skies to see the sun. Thousands left the coast and travelled hundreds of miles inland to find clear skies.  However, that was no excuse for us to miss out on a neighbourhood get together and breakfast-party.

At 5.30am on Wednesday I walked out of my mangrove hideaway and went up the range to join a gathering crowd for the viewing. 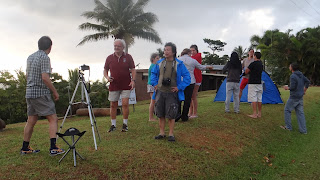 We were soon met by visitors from Sydney and Melbourne, some who camped overnight on the hill. At the top of the Moresby Range an even larger crowd of Innisfail people had gathered to see this once in a lifetime event.
The skies opened and heavy rain fell, no hope of seeing the sun we thought dejectedly. 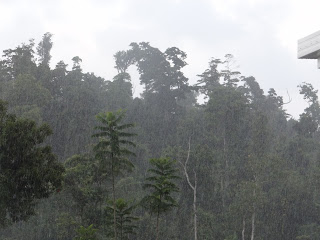 Someone shouted, "Look a rainbow."  Amazingly a rainbow had formed over Coquette Point and the end fell close to where we were standing. The girls ran to dance in the rainbow's hues. Suddenly the sun came out from behind the clouds and there it was in a golden crescent shaped by the moon. 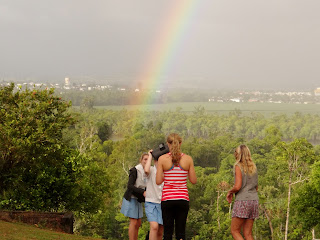 We noticed the increasing dimness surrounding us and we left the rainbow to look to the east in time to view the total eclipse. 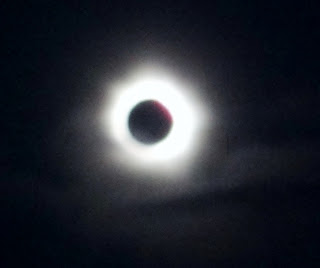 The blackness enclosed us, as black as night and from the youngest to the oldest we gasped in amazement as the magic of the moment filled us with joy and wonder. We saw earth's small moon block out the mighty sun's light and we joined the millions through the ages who felt the mysterious  power of the universe. 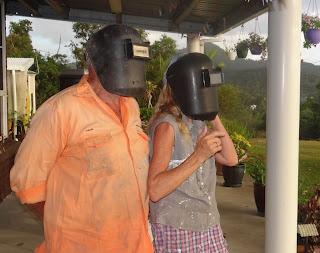 We had a dozen welding helmets and they sat like strange masks on our faces as we gazed skywards.
All to quickly the moon moved across the face of the sun and the sun's bright light removed the blackness just as quickly as the moon had plunged us into darkness.
I ran to the osprey nest just in time to notice Osprey's head had fallen onto his breast ready to sleep as darkness had swooped over him.  The light returned and with a jerk he was awake again. We had all experienced a moment of earthly magic. 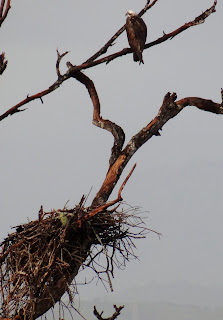 The ospreys have been displaying courtship behaviour and engaging in lots of preening  since they completed their nest building. 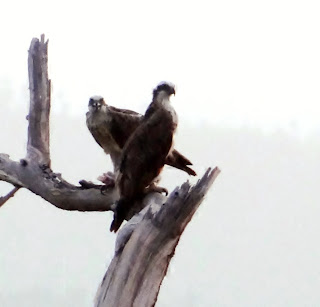 The scrub fowls have been working on their mound bringing in new material and calling loudly. The large males stand and crow and crow from well before sunrise and when the females see them they run away in freight emitting long gurgles.
Male scrub fowl crows loudly early in the morning. 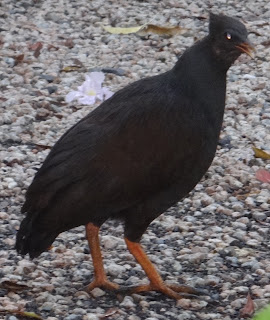 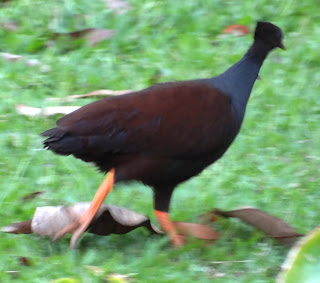 The activity in the
scrub fowl's mound is happening at night -  so no photo yet.
The metallic starlings are still building new nests. Their building activity happens in the cool of the morning and again in the late afternoon: they are not stupid.
I watched as a great flock of metallic starlings descended on a tree. One bird pulled and pulled and cut and sawed with his beak until he had harvested the desired piece. It was a long vine and several birds descended on it and tried to steal his bounty. It resulted in a massive midair tug of war between four birds as they flew across the river towards the nest-sight all pulling and tugging at the vine. 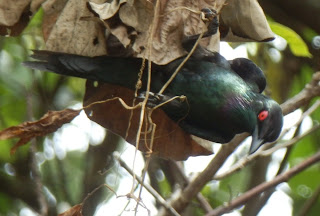 While the metallic starlings are roaming free at Coquette Point, in Innisfail's CBD they are being hounded. The metallic starling is an extremely beautiful Australian native, migratory bird. - but it is not welcome in Innisfail. Apparently it is too hard to shift a couple of seats from under the starling's nesting trees near the Post Office or to hose the cement under the trees once or twice a week. Instead  the Council wants to shift the birds. Visitors have told me they see the  birds as an attraction to observe and photograph, a reason to stop in the CBD. One person said to me. "You can't be serious, who wants to shift them? These birds add colour and charm its part of what makes Innisfail special!"
I was delighted when Jeff and Helen Larsen joined me to take a look at the dying mangrove forest at Coquette Point. We have had strong, southerly winds over the last couple of weeks and a lot of scouring has shifted sand from the flats and washed it up on the high water mark. The action of wave and wind has exposed the roots of the old mangrove forest and we were able to examine the remains of the old forest some 300 metres out from the present high water mark. 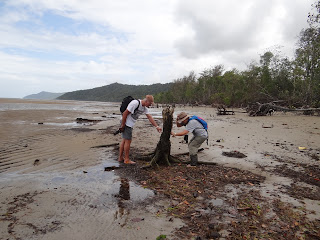 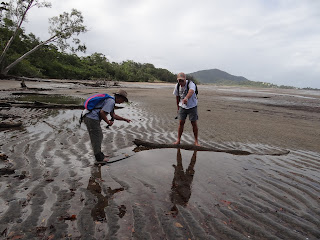 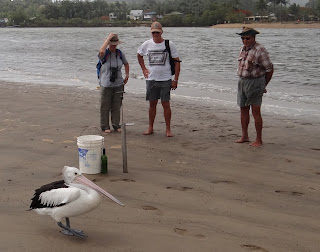 A flock of 50 Gull-billed Terns were busy fishing over the estuary. 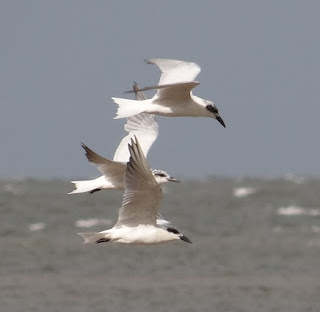 We saw several Little Terns and a number of adult and juvenile Crested Terns. 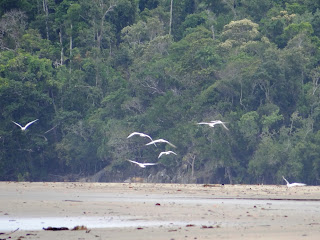 We watched as the juvenile Crested Terns fished for sand dollars in the wet sand, or at least we think they were.
The peace was broken as we saw two young 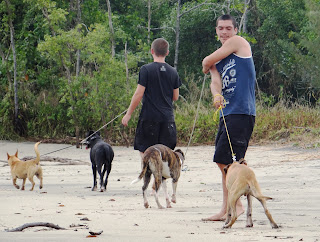 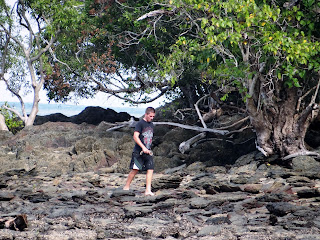 We turned to go home as the tide was coming in when a local passed high up in the Wet Tropics Esplanade walking his dog without a lead. When he saw me he gave me the finger. 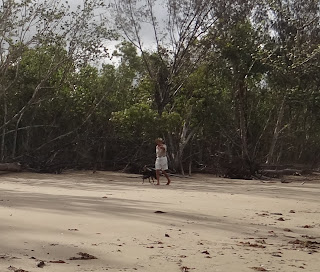 Many shorebirds fly thousands of miles to rest and breed on our shores. They face every danger in their journey but it seems now, because of the actions of a few,  the shorebirds can no longer find sanctuary on the shores of the Cassowary Coast.
Yvonne C.
Posted by Unknown at 02:59