On Thursday the Cassowary Coast Regional Council, CCRC, approved the reconfiguration of the Metricon marina development at 65 Coquette Point Road. This 89.26ha marina development abuts Ninds Creek, on the east and fronts the Johnstone River to the north. It is part of the old Ninds Creek Wetlands and as such the soils are acid sulphate. The site was cleared 100 years ago for agricultural and cattle farming purposes.

The reconfiguration of the 180 water lots, granted on Thursday (8.11.12), allows the water-front-landholders, within the marina, free access to the canal and lake without the restriction of an easement: just a bit of plan-tiding-up.

Preliminary approval for this development was made by the Administrator of the old Johnstone Shire Council in December 2007. The Administrator in 2007, agreed to Metricon's request, when the construction is completed Council will take over ownership of the park lands and marina and will maintain them. The water-lot-landholders will be charged a benefited rate fee of $2000 per year to cover these costs. As this development is complex with a lock system and a closed marina some have estimated the annual cost to CCRC ratepayer to be within the vicinity of one million per year; and that is without dredging. The amount CCRC will recover under the present arrangement is $360,000 per year, giving a ratepayer subsidy to the development, on these figures, of $640,000 per year.

A permissible change was negotiated with CCRC on the 2.12.2010 included in this was an extension to 13 March 2016 of the development approval. 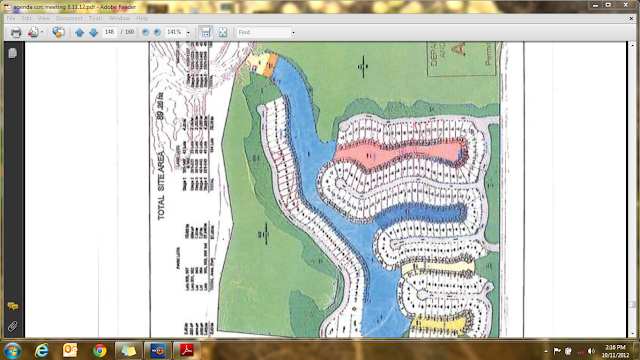 This development was approved under the constraints of the FNQ2031 Coastal Plan!  "However, a development may not need to comply with the above policy outcomes outlined in the Part C of the Queensland Coastal plan, as there may be acceptable circumstances for not fully achieving the overall policy outcome......when the proposed development is a development commitment.' There has always been a backdoor: and so Sea Haven was approved.
One of the conditions placed on Metricon is that the development 'is in keeping with the predominant character of the locality'. I think that is amusing as the CCRC sewerage farm is across the road on the western side and mangroves, mosquitoes and mud line the entrance through Ninds Creek.
Historically this land has always flooded, it is after all a wetland, and I understand Metricon plan to use the fill, from the canals and lakes, in part, to raise the height of the land some four metres. It is likely that this will act like a dam blocking flood waters, which naturally are released in an easterly flow into Ninds Creek, and it is thought this will extend the duration of floods in the surrounding urban area of Howe Street and ironically all road access to the Metricon Sea Haven development. However, the EIS shows this will only happen in a 1/100 year flood. The locals of the area think otherwise and only time will tell.
Marching ahead of time this week is the caterpillars of the 4 o'clock moth. Normally they hatch in mid summer, this year they are early. 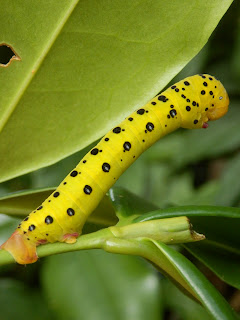 O dear that tasty tip is all gone.
Let me see what can I eat next? 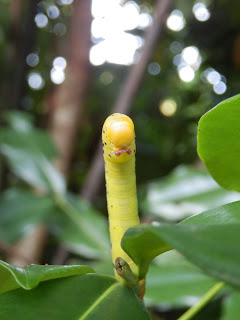 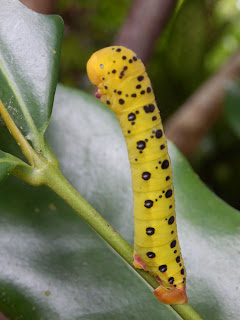 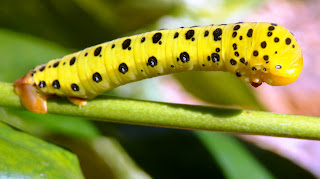 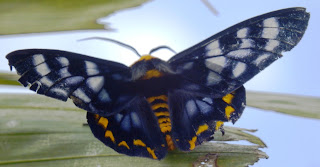 The Ospreys have rebuilt their nest, torn down by a goanna last year. They have been taking turns to guard the nest. I watch them every day flying over the river estuary looking for a meal. 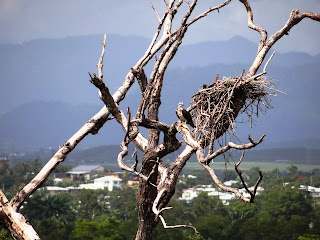 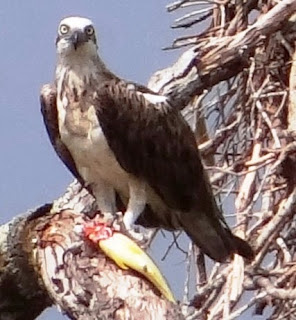 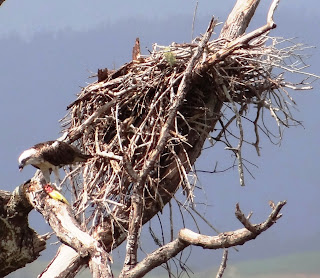 Running around under Osprey's nest are dozens of cattle egrets. The egrets have started to develop their breeding plumage.
This week I heard the distressed call of a frog. Running towards the sound I saw a butcher bird with a very large frog in its mouth. 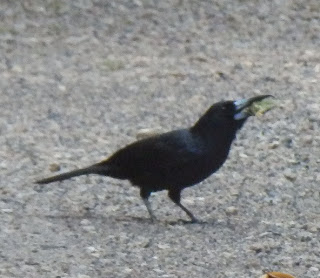 With one big swallow the frog went down. 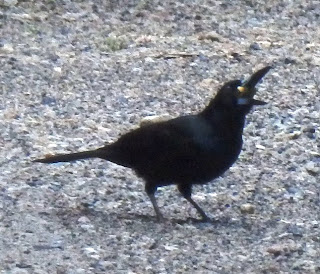 Cassowary Jessie is still walking-out with Snout. I don't know if they just like each others company or if Snout is reluctant to nest again, as this courtship has been going on for over seven weeks. 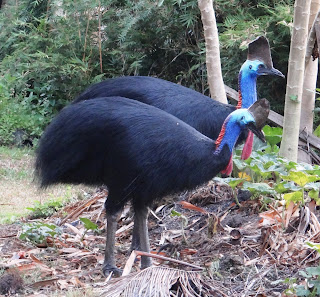 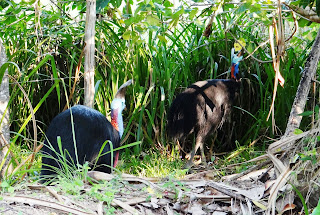 Lots of longicorn bugs have suddenly turned up in the nursery, they are such strange insects.
The flower longicorn an important pollinator. 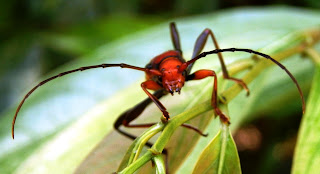 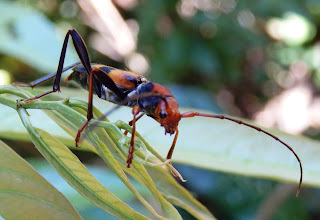 The larva of most longicorns are wood-borers 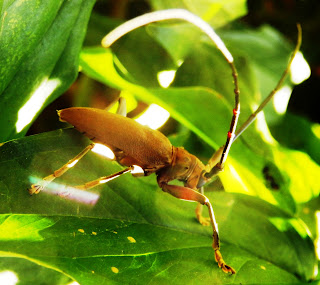 Stick insects of many kinds are also suddenly numerous in the rainforest. The female stick insect has no wings and can be confused with mantis. However, the stick insect eats foliage and does not possess spined forelegs for capturing prey.
Female stick insect.
CCRC officers delivered the shorebird pamphlet, 'Protecting the Little Terns of the Cassowary Coast' this week and I have started handing it out to local residents.
I happened to see CCRC law officers taking a photo of the vandalised sign at the end of Coquette Point Road. 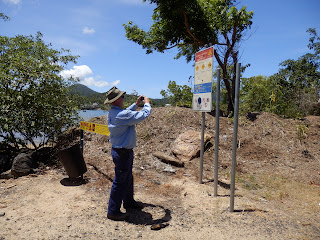 Hopefully the sign will be repainted soon and the Little Terns can nest with out the fear of dogs.
cheers for now,
Yvonne C.
Posted by Unknown at 02:17