Whilst most of Queensland is crying out for rain, the Wet Tropics has lived up to its name and been wet and very windy all week.

This morning however, the wind backed to the South and the Johnstone River was momentarily calm, only disturbed by a lone paddler. 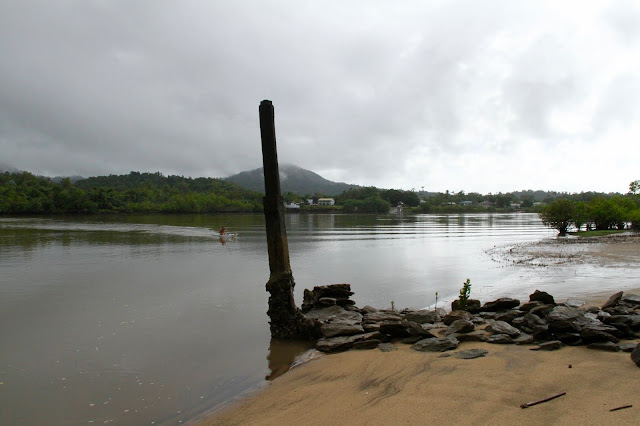 It took only three days for another crocodile to fill the gap left after Frank was captured by EHP officers last week; I have called the new crocodile Steven, after his boss. 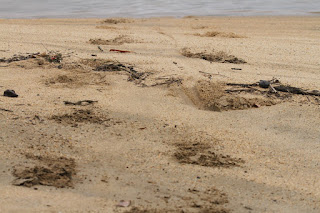 I found Steven basking in the sun, during a break in the rain, he was lying high up on the beach above the high-water mark. When he saw me he scurried for the water and I just managed to take a photo before he disappeared. I estimate Steven is about three metres long.

I spoke to Geoffrey, a local fisherman, who has seen Steven a few times and he said this crocodile didn't hang about but scampered as soon as he saw a human and in his opinion was not a problem crocodile.

The Coquette Point Road runs to a dead end, it seems for that reason irresponsible pet owners think it is a good place to dump animals. I don't know if this blue cattle dog was dumped or lost but I found it at  the end of the road and it evaded my every attempt to catch it. Geoffrey, the fisherman, also saw 'Bluey' and also was unable to catch her. Geoffrey did say he saw her hanging about close to where he had seen the crocodile, so she may have been taken. Alternatively, if she was lost, not dumped, the owner may have found her. If anyone recognises this dog please leave a comment at the end of the blog.
When the breadfruit trees are in full production feral pigs hone in on the sweet smell of the ripe breadfruit, I always know it is a time to have my pig cage set and ready. Two small pigs, one young boar and a little female on Monday and today one large boar. 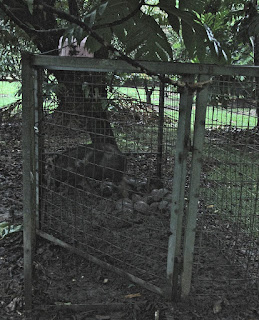 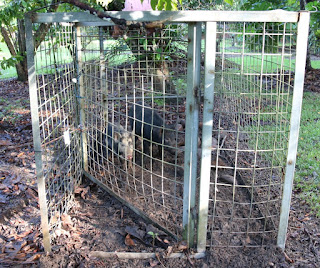 Feral pigs pose a real threat to cassowaries and other ground nesting birds like curlews, scrub fowls, brush turkeys and rails as they eat the eggs of these birds. Feral pigs cause a lot of damage to creek beds when they forage for beetle larva and they also eat many rainforest tree roots and plants. There is a huge cost to agriculture from feral pigs when they damage horticultural crops. It is important that pig cages are designed not to attract non-target species like cassowaries, pademelons and quolls. Pig cages with vertical push open doors do not catch non-target species. It is the responsibility of all landowners to control feral pests on their land; that goes for even small landowners like myself.

The amazing fig tree, ficus drupacea has set another crop of fruits. This one tree is so important for so many birds and animals in the area. 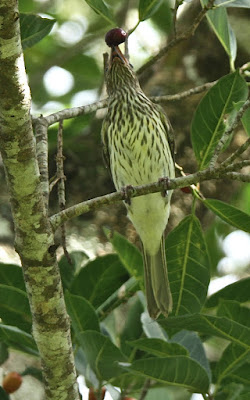 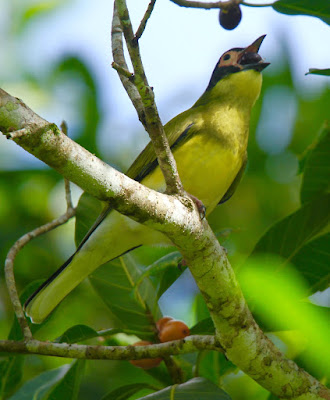 Fig birds, metallic starlings barred cuckoo shrikes and double eyed fig parrots feed in the canopy throughout the day, by night the spectacled flying foxes fight over the fruits and pademelons and white tailed rats feed on the fruits they drop. Day and night the birds and bats knock fruit to the ground where the cassowaries come to feast every few hours throughout the day. 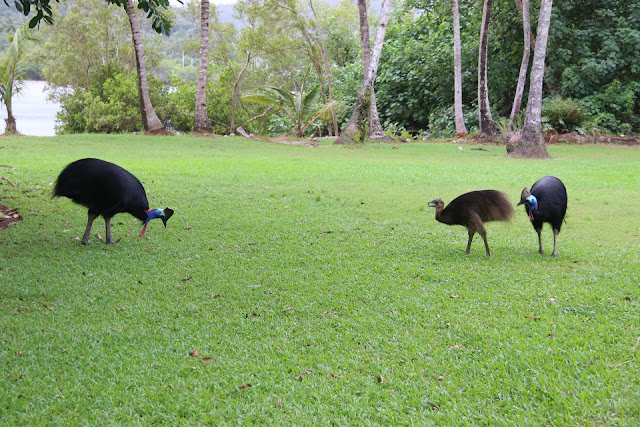 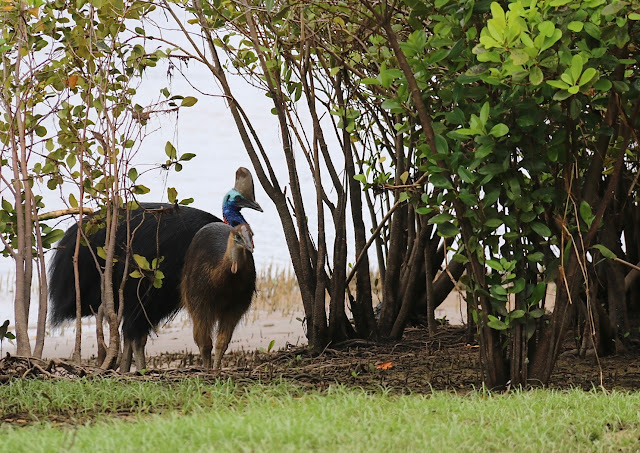 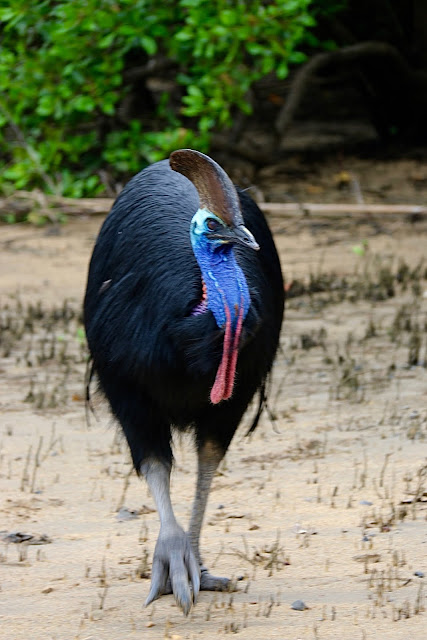 Sometimes the cassowaries walk up from the beach to reach the fig tree other times they walk through the nursery. There has been plenty of fruit and Jessie has behaved submissively in front of the other cassowaries. Sometimes Snout and Kin sit and wait until Jessie has finished eating; it all seemed like a happy cassowary family. 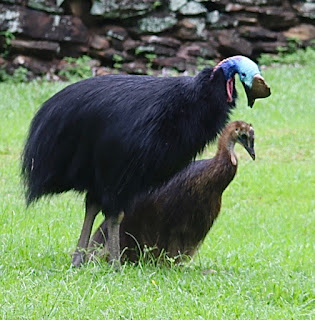 Then suddenly on Thursday Jessie changed personalities. I was sitting on the veranda having a cuppa when I heard deep booming and saw Snout and Kin running for their lives. Jessie didn't have to move it was just the sound of her bad tempered call that caused Snout and Kin to run. Jessie was showing her dominance and every male cassowary knows that this matriarch demands respect. 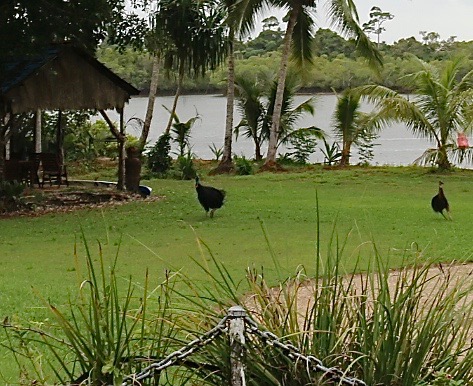 This week Jessie has been patrolling the boundaries of her territory and Ruth Lipscombe saw Jessie chasing male cassowary Hagar and his two chicks. The chicks are now separated from Hagar and they stayed the first night under Ruth's house. Poor Ruth had to listen to them cry all night.
Hagar has not been seen for the last few days, it appears he has taken full advantage of his freedom from fatherly duties and has gone walkabout in the Moresby Range National Park. There are now two of Jessie's males free from their chicks, Hagar and Hero. It will be interesting to see which male she chooses to court first.

BirdLife Townsville has a very active membership, they organise campouts from the dry outback to the rainforest. This long weekend they visited the Wet Tropics Rainforest of the Cassowary Coast. While we may be getting a little tired after two weeks of rain, the Townsville BirdLife group loved it. The Ross River Dam is only 24% full and that is at the end of the Wet Season, they are all worried; but not this weekend.

I took the group for a walk through the mangroves and along the beach at Coquette Point. We saw Osprey hovering over a fish boil in the river and two beach stone curlews were calling as they ran ahead of us as we walked around to the long beach. 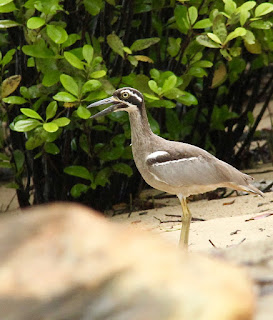 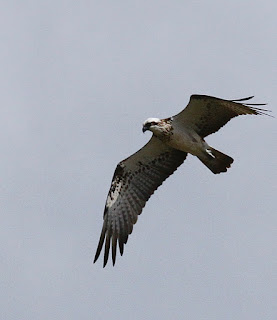 On a sandbar over 100 crested terns rested while other terns were flying about feeding in the river.There was a good number of juvenile terns in the flock, five can be seen in this section of the flock below.

One male tern tried to offer a female a fish, he chased her around in circles but she was not interested in his gift. When one of the chick tried to take it he flew away. 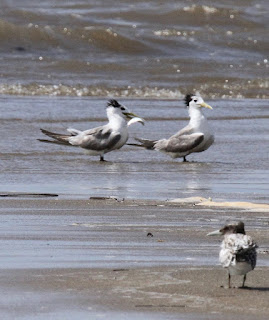 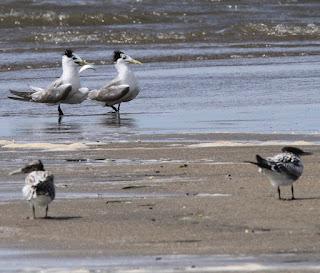 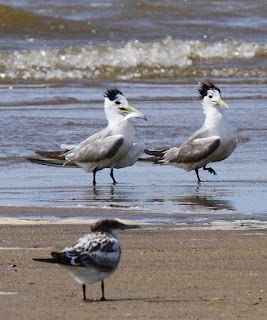 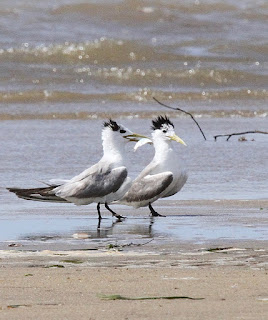 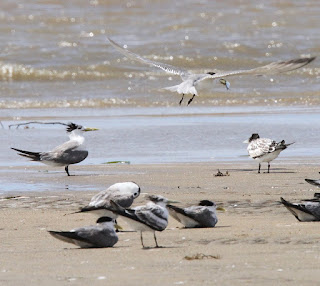 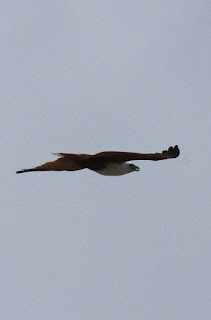 Suddenly Brahminy kite appeared, in a panic the terns lifted into the air and moved to a distant sandbar. 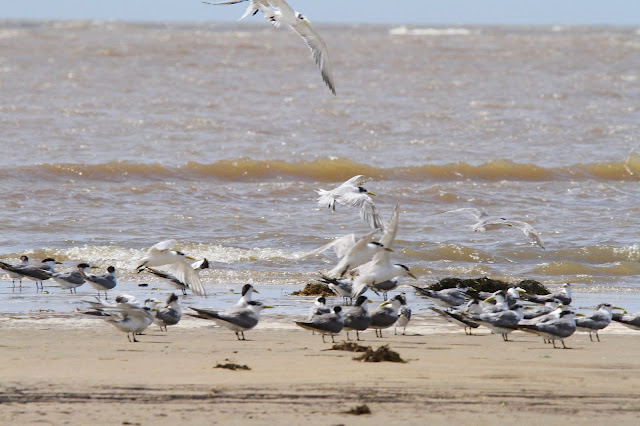 The cries of the terns were quickly drowned out when a small flock of red-tailed black cockatoos arrived. Some perched on old mangrove trees while other headed for the beach almond trees. 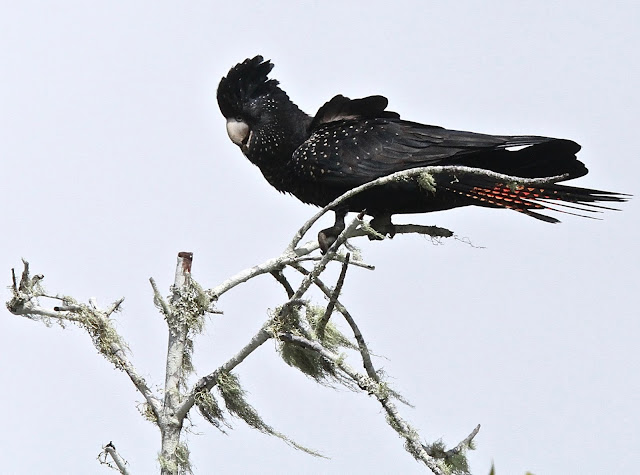 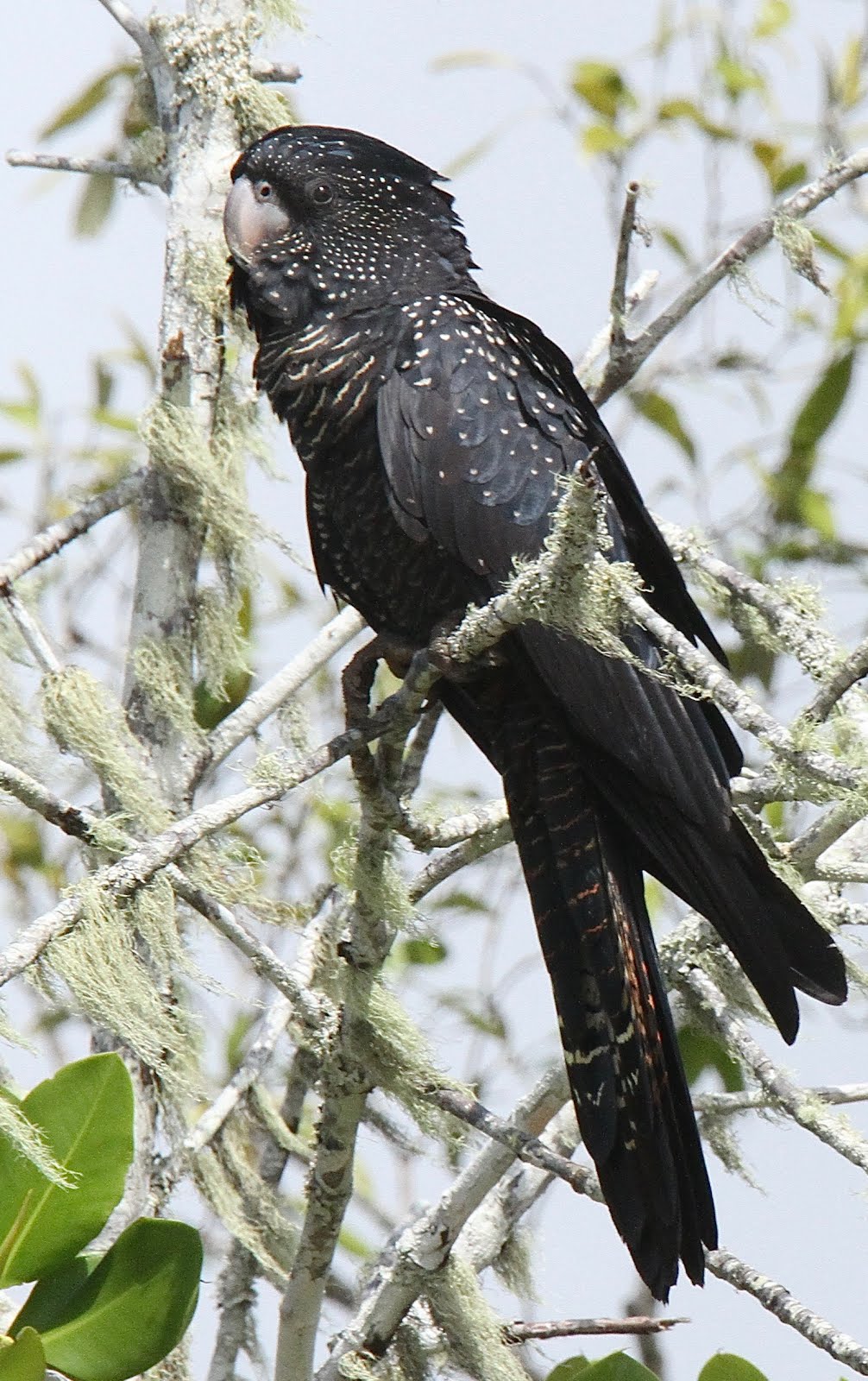 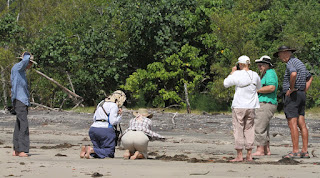 We saw a juvenile horn-eyed ghost crab and the birds were forgotten as we all tried to get a photograph of this small opaque creature.

It was a case of 'bend the knees' to get a good shot. 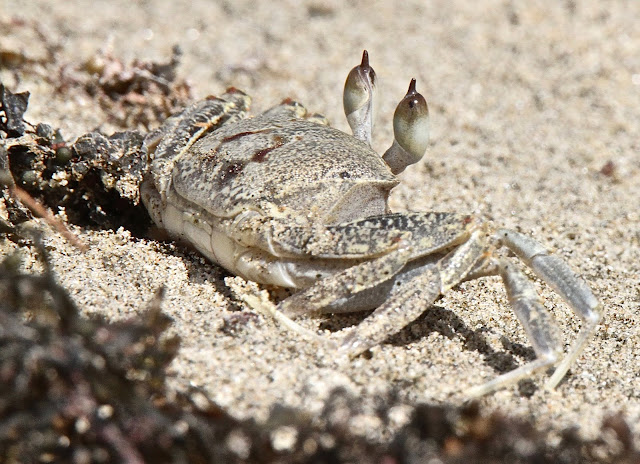 The pied oyster catchers were sleeping amongst the flotsam but the good eyesight of some of the members soon spotted them.

Easy enough to see once they started walking about. 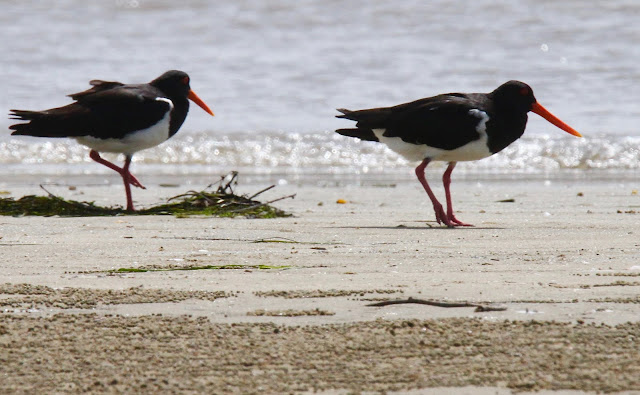 As we crossed back over Crocodile Creek we saw a great egret fishing on a sandbank and watched when it flew off. 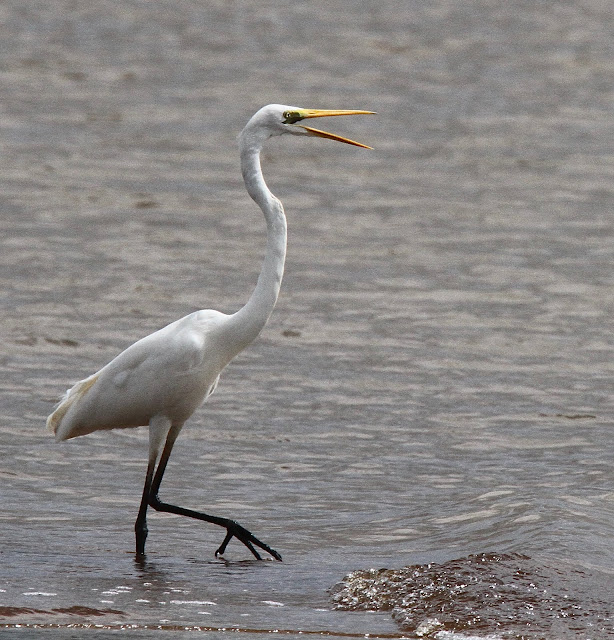 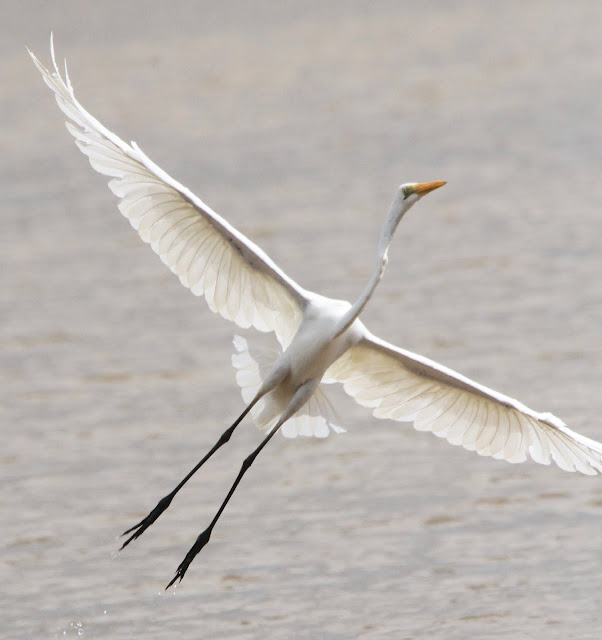 The BirdLife Townsville members all posed at the Crocodile sign. 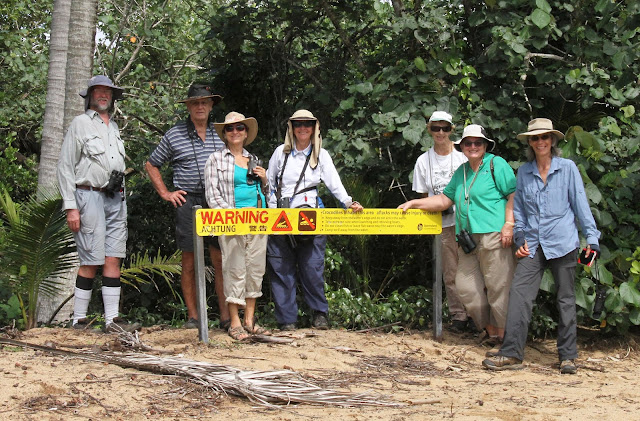 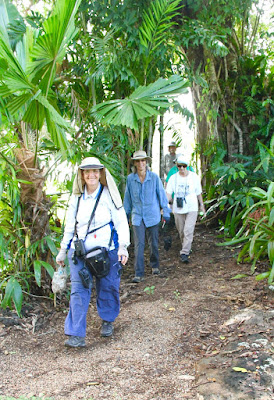 Then walked through the middle of the mighty fig tree as they watched the fig birds feeding above.


It was wonderful to spend time with like-minded people who can see the wonder in small things.

I'am sorry the mosquitoes were so bad for my Townsville visitors; even the cassowaries are having a hard time of it.

Once again it is clear to see, below, you should not wear black or red in mosquito country. Unfortunately, poor Snout doesn't have much choice. 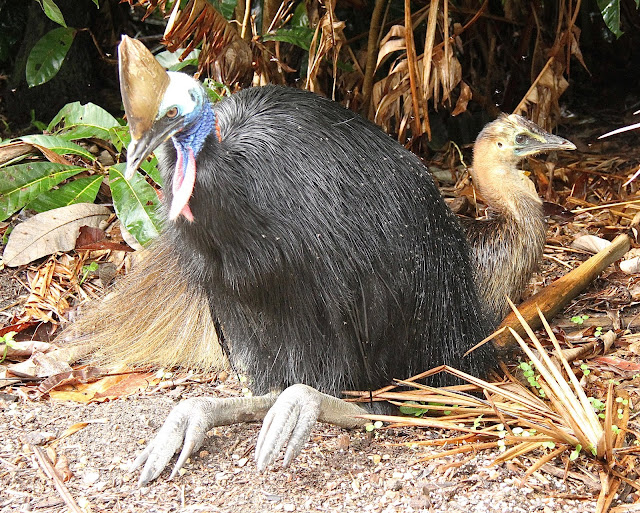