Hello from a buzzing Coquette Point, 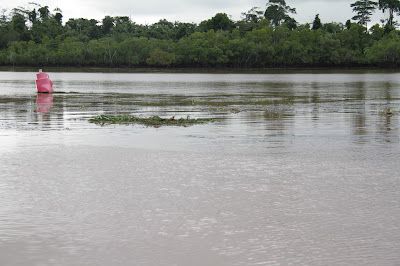 Good rain all week was enough to put the Johnstone River into minor flood on Wednesday. The rain also flushed out a number of creeks and lagoons and lots of small grass islands floated down the river and out to sea, no doubt a real problem for ships at sea.
The sediment load in the river was not as high as I have seen before, however, it turned the ocean brown for as far as you could see.

A new probe was fitted to the sediment monitoring station at Coquette Point this week by two scientists from DSITI. 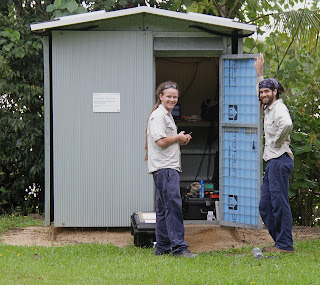 We may be alarmed by the colour of the water but the Department of Science, Information Technology and Innovation is monitoring the sediment and chemical load in the water column.

The rain has filled all the creeks and lagoons so the 'little bighters' are having fun. High humidity and rain are the perfect breeding conditions for mosquitoes. 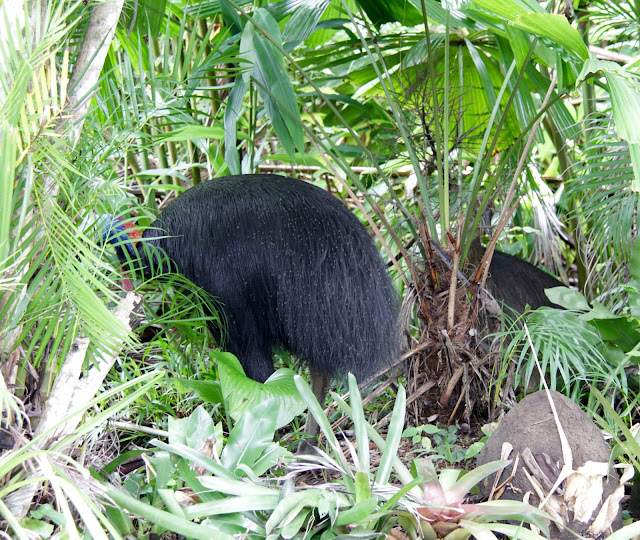 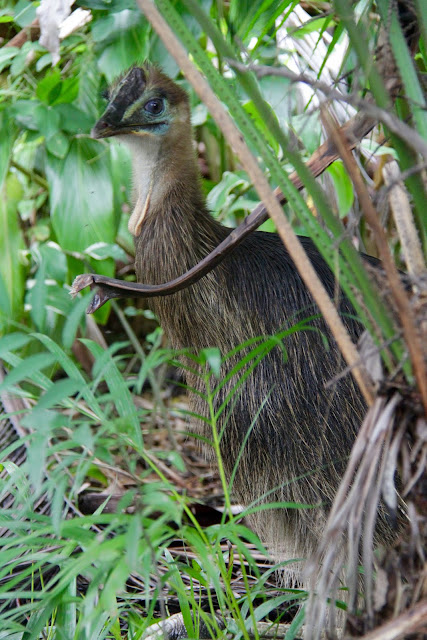 It's a well known observation that the colours black and red attract mosquitoes. If you were ever in doubt just look at the number of mosquitoes around the black quills of Cassowary Snout compared to the few which are annoying his chick Kin.

Pour away 10 mls of the Sorbolene lotion, add the oils and shake well. Always shake before applying the cream.

The mosquito population exploded overnight on Friday following the rain this week. I took a photo of matriarch cassowary Jessie when I came across her in the rainforest on Monday and there was not a mosquito in sight or bite. 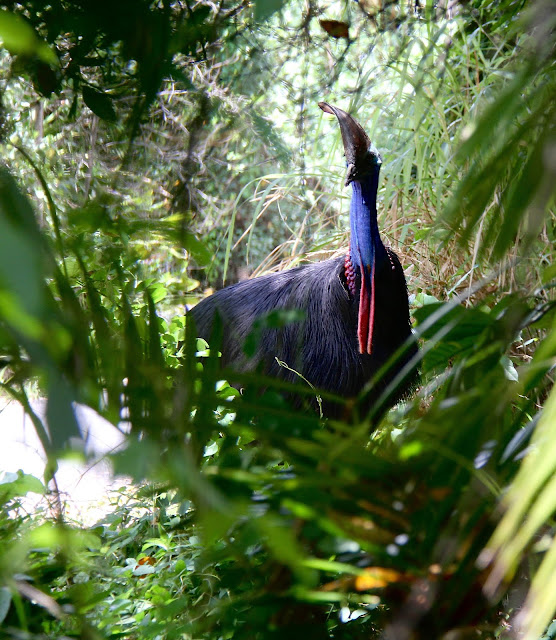 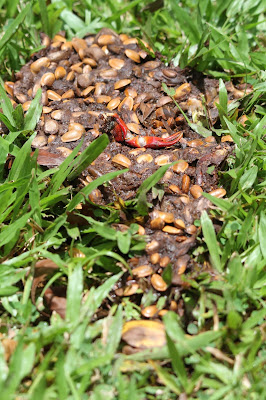 The cassowaries are still eating a lot of pond apple fruit and I saw the claw of a crab sitting on top of one scat, see left.
I often see cassowaries around the mangroves and on the beach and have watched them watching crabs but have never managed to see them actually catching a crab. I have seen the evidence of crabs in cassowary scats before.
High tides and lots of rain the mangrove crab is on the move and he is the most likely crab to have ended up on the cassowaries' dinner table. 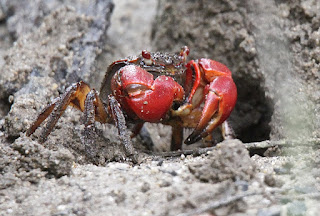 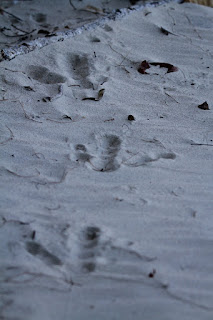 The cassowaries are out and about on the beach. There were fresh cassowary footprints close to the sea lettuce, Scaevola taccada shrubs. The plants are full of fruit and still flowering. 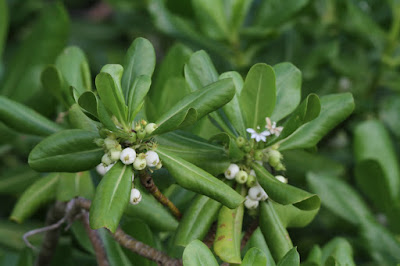 No sign of the bar-tailed godwits this week and I saw only one whimbrel. It appears the shorebird migration has commenced. What was surprising was to see about ten little terns on the very outer sandbar, they were with crested terns. This was my first sighting of little terns since they left the rookery after three successful hatchings before Christmas.

Around 50 greater sand plover still remain on the beach and some are starting to show the first signs of their breeding plumage. 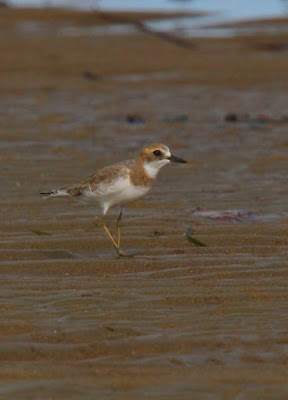 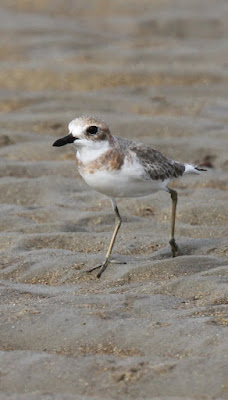 The pair of beach stone curlews looked as if they were about to mate but he was only interested in having a good scratch. 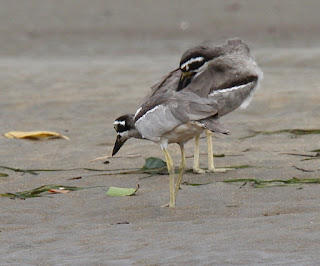 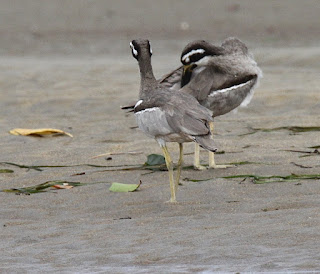 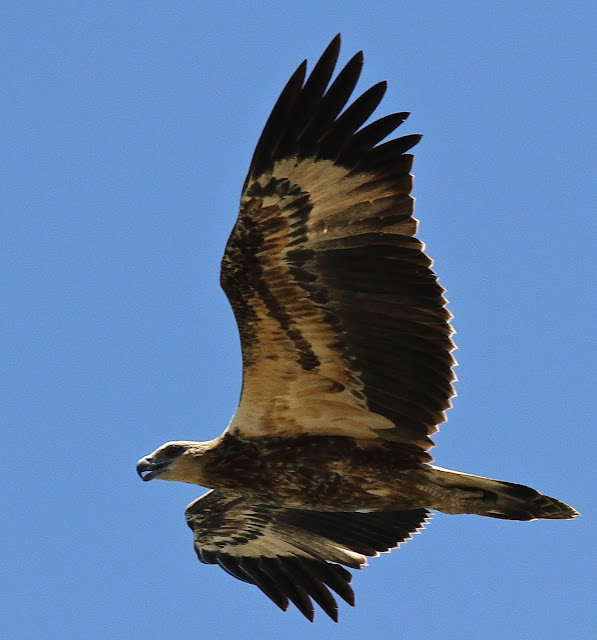 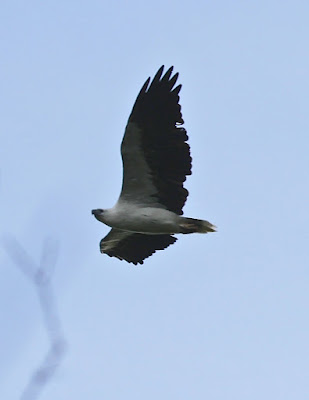 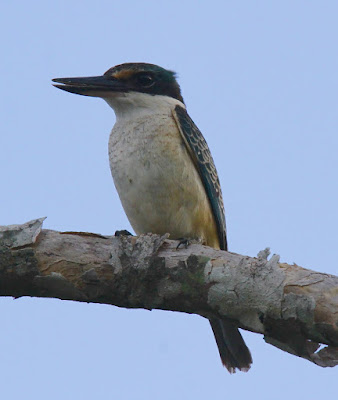 A juvenile and an adult white bellied sea eagle flew over the beach on the lookout for a feed.
Every time their shadows passed over sacred kingfisher he called in alarm. 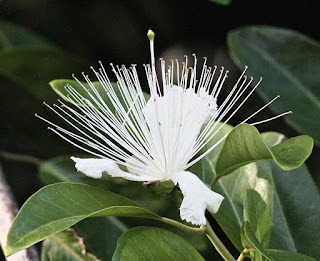 A solitary red necked stint was fishing at a puddle. He may have been separated from his flock in a rain squall.

Between the mangroves and the dunes the bush caper capparis sarmentosa opens its nocturnal flowers in the late afternoon.

In the mangrove forest, the stilt mangrove, Rhizophora stylosa is in flower.
One doesn't always think of mangrove forests as places to look for flowers, but they are there and if you look, you may be surprised. 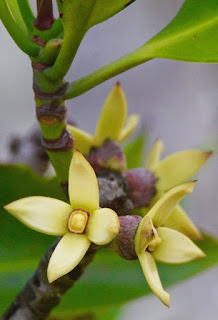 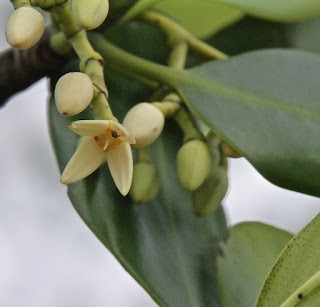 The red-tailed black cockatoos fly every morning to the foreshore to feast on the prolific fruits of the beach almond Terminalia catappa. As the sun sets they fly to their roosting sites around Innisfail. At the moment they are roosting on the light poles at the southern entrance to town. 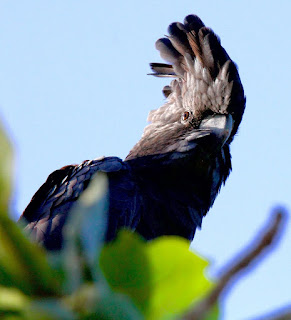 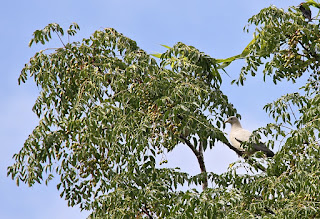 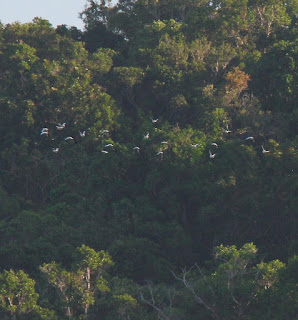 Large flocks of Pied Imperial Pigeons have been visiting the Moresby Range National Park and the Mt Annie National Park every day. They are mainly feeding on the fruits of the white cedar, Melia azedarach, above, and on the abundant fruits of celery wood species, particularly, Polyscias australiana. 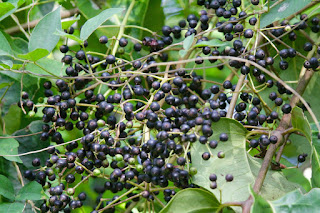 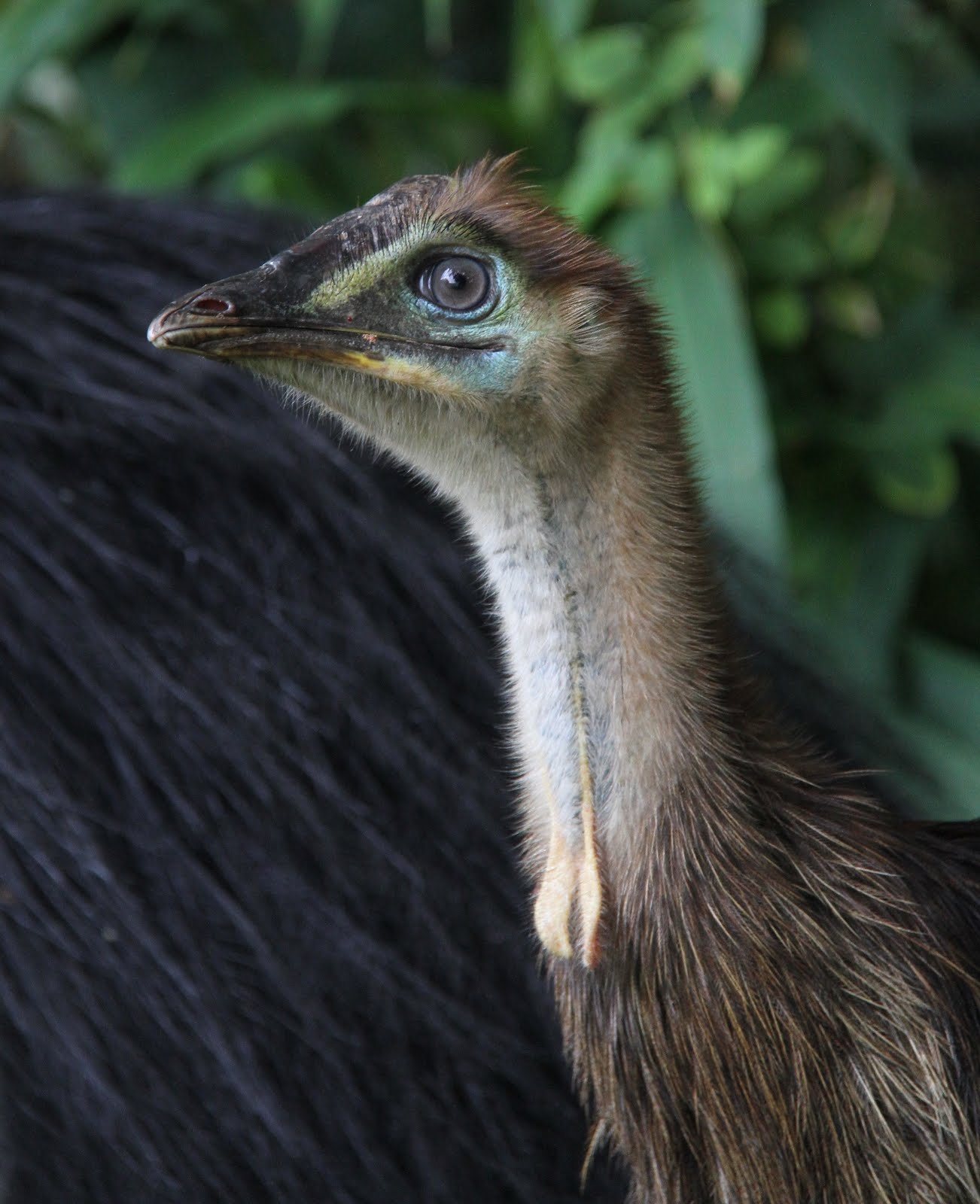 Mushroom 'fairy rings' appeared on a vacant allotment at Coquette Point this week. There were over 10 rings across the hillside, some of the rings were four metres across. Unfortunately, I did not get to photograph them until the fungi turned brown. There are lots of superstitions about these rings, particularly from Europe where they often occur in the temperate climate. I had never seen them growing in North Queensland before. Have you ever seen them? 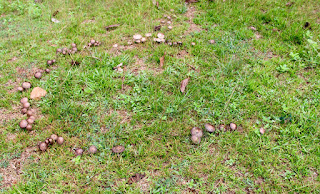 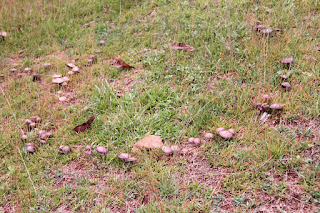 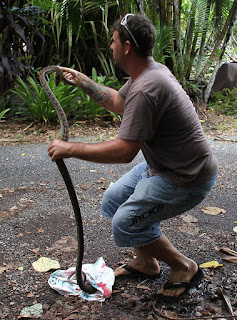 Nathen and Elizabeth Taylor brought a new resident to Coquette Point this week. She was found in a neighbour's house and Nathan was asked to relocate her and of course he thought to bring her to Coquette Point. She is a young Amethystine python and will join Monty and Monica and all the M&Ms.

Nathan released her into the pandanus swamp and she disappeared in seconds. 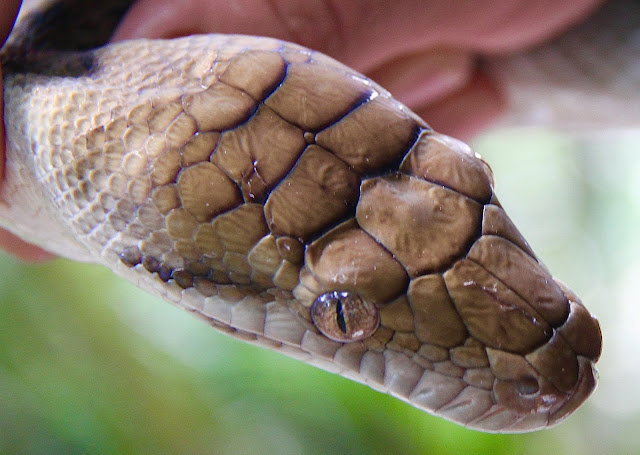 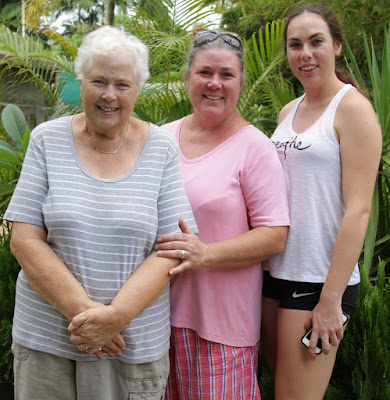 A very big welcome to the Braithwaite family who have just moved to Coquette Point from Millaa Millaa. Welcome Robert, Shirley-Anne, Cait and Lauren and a hello to Nana Ruby visiting from Perth. Sorry about the weather at the moment but it does get better.

The Braithwaites have already been down to the nursery and are keen to start a makeover of their garden.


Cheers for this week,
mind the mosquitoes,