It reached 36 degrees with 88% humidity again today, the heat is taking its toll on everyone and I think we're all working in low gear waiting for a cool southerly breeze. 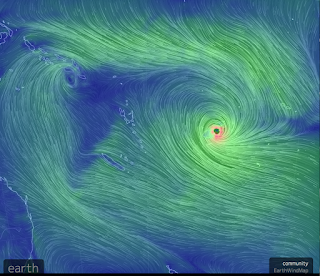 There is more than a breeze out in the Western Pacific, Severe Tropical Cyclone Winston is now a high category 5 and at the moment is devastating the Fijian Island of Vanua Levu as it side swipe it. It had been forecast that Winston would hit the main Island of Viti Levu, but at the last moment it altered course and has headed due west.  There are a number of large resorts on the southern side of the island and they are feeling the brunt of this very intense cyclone as I write.  The sea surface temperature around the Fijian Islands is 31degrees, hot enough to have stoked this weather system into a monster. The people of Fiji will need a lot of support over the coming months as many house and food gardens will have been destroyed by STC Winston.


The sea surface temperature in the Coral Sea is 33 degrees at the moment, according to my son Martin, who is out there fishing,  and he tells me in 'glassed out' conditions. We are all keeping an eye on ex-tropical cyclone Tatiana, it has now drifted into the Solomon Sea and is expected to dissipate; let's hope so anyway. 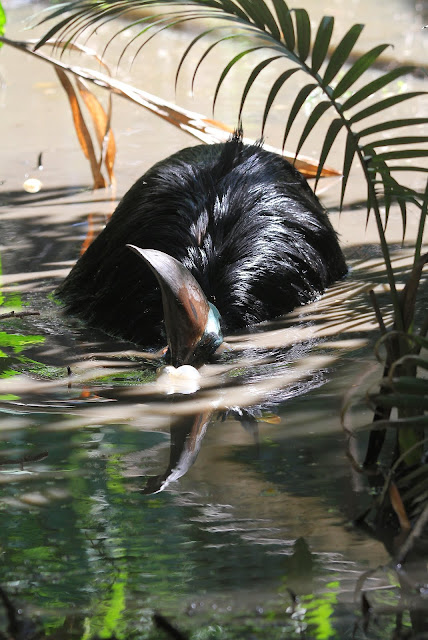 How do we keep cool in this heat? Old cassowary Jessie knows a thing or two, you sit in a pool of water and blow bubbles, then with a mouth full of water spit it all over your body.

Today Jessie sat in the pool for over an hour, from 12.30 to almost 2 pm. When she left she expelled a large scat of 100 % pond apple fruit and seed. The pond apple, a declared noxious weed, is in fruit in some areas along the Johnstone River bank, the fruits are cassowary favourites. 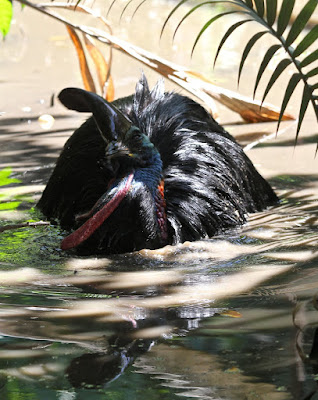 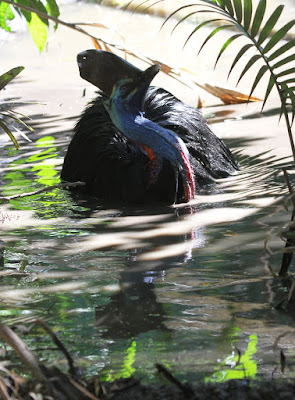 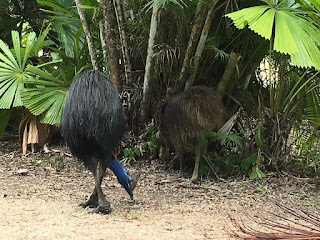 Often Cassowary Snout and Kin have to wait for Jessie to leave the pool before they can take their turn to cool off. While they wait they eat the exotic golden cane palm seeds which are dropping in their hundreds and the cassowaries are having a feast.  It is problematic of course, when cassowaries eat the fruits of exotic palms and trees,  they spread the seed into the rainforest. It is not just cassowaries that will do this, all seed and fruit eating birds have the potential to spread the seed of exotic plants. 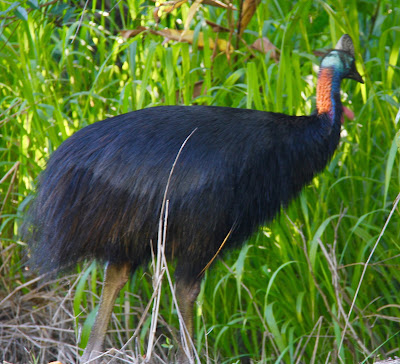 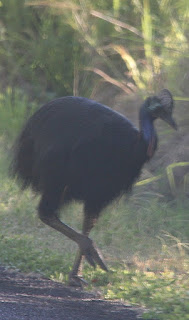 On my way home from town on Friday afternoon, I saw a young cassowary, photo above, crossing the road, it disappeared into the swamp before I had a chance to take a good photo. From the pattern on the back of its neck, the casque and the wattles, I believe it is cassowary Ky.  He had walked out of the old Forestry Track and crossed the road and headed north through the swamp on the western side of the road. It was so good to see him looking strong and healthy, obviously finding plenty of food to eat.  He is possibly chasing pond apple fruits and in so doing crosses the road from the Moresby Range National Park onto private property and down to the riverbank where they are growing.

There has been another dog incidence at Coquette Point involving the six month old cassowary chick Brian belonging to Cassowary dad Ross. On Sunday evening I received a phone call from a resident saying that cassowary Ross had just passed through their property in a very distressed state, making hissing sounds and walking backwards and forwards and around in circles, he was without his chick Brian. Earlier they heard dogs barking madly.

The next morning I received a phone call from another neighbour, two blocks up, saying they had just seen Cassowary Ross he was looking very stressed and did not have the chick with him. They also had heard dogs barking loudly the evening before. Both of these residents phoned the cassowary hotline and reported this incident.

Cassowary Ross was named Rosie by a young traditional owner who was a National Park Ranger when this chick arrived. When we realised it was a male cassowary, we altered the name to Ross.  Ross is now five years old and is one of Snout's chicks, to my knowledge the chick Brian was his first. The chick was named Brian after the late, long time Coquette Point resident, Brian Kebby. 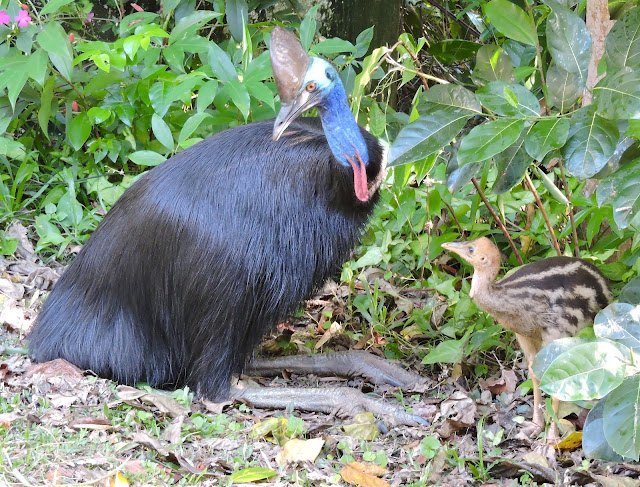 Some good news, Allan and Marie Hallifax report they have seen cassowary Peggy walking through their property several times over the last week and she is fat and fit. It appears she has safely disentangled herself from the fishing line; no recent photos of Peggy. Late news: Allan just emailed that he saw Ross late this afternoon walking with Peggy. Thank you Allan for the news, Ross may have lost his chick Brian but he appears to be ready to start again with Peggy.

The first of the leaden flycatchers has arrived from its summer holiday in the south. This little bird wouldn't stop singing telling everyone he was here. No sign of any female leadens as yet. 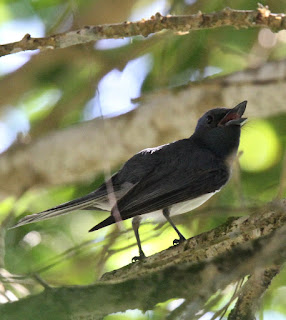 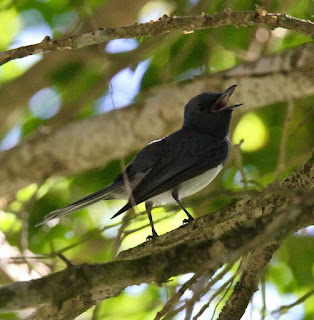 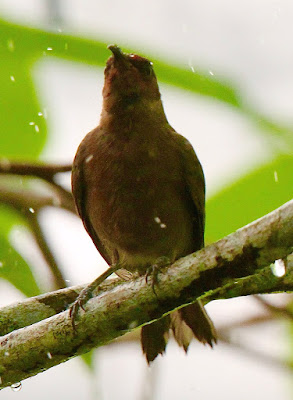 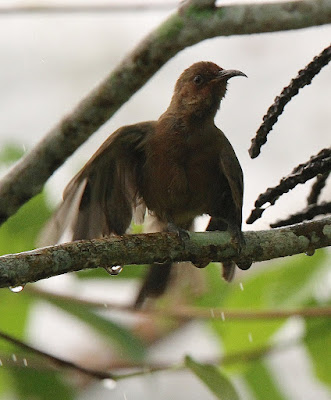 There is always water on somewhere in the nursery, particularly in this hot weather, and little dusky honeyeater loves to have a shower under a sprinkler. I'm sure she's smiling. 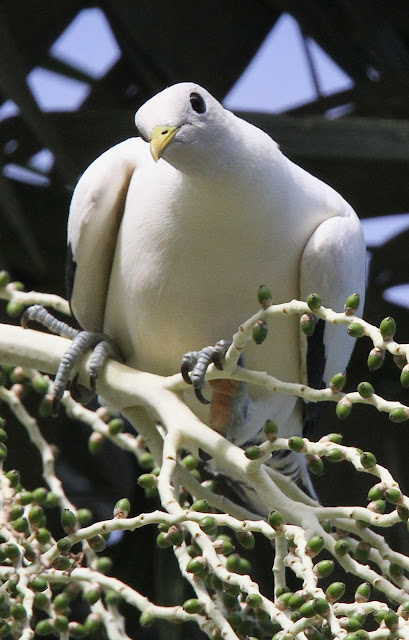 Good numbers, 10 to 12, of pied imperial pigeons have been feasting on the fruits of the Alexandra palms all week. One PIP instead of being nervous by my camera seemed to take a great interest in what I was doing and allowed me to walk in close.

This week I have observed several large flocks of PIPs, one with around 200 birds, flying north, late in the afternoon parallel with the coast and very high in the sky. 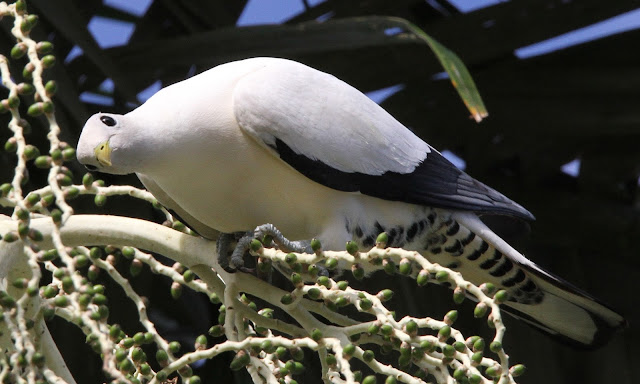 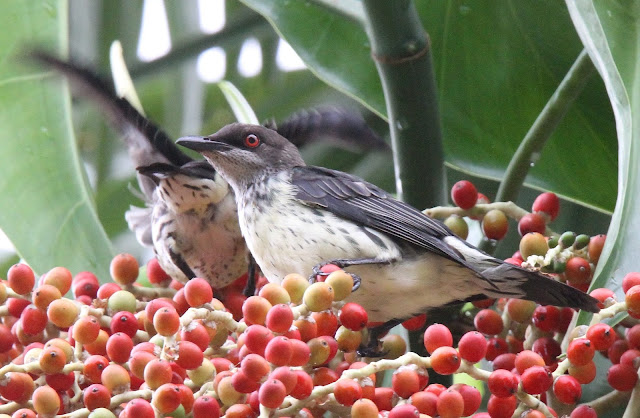 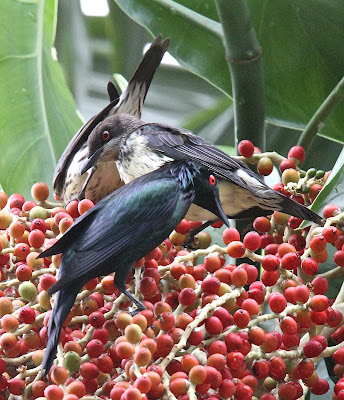 We can learn so much from birds and animals. I noticed a large number of juvenile metallic starlings arrive to eat the ripe fruits on an Alexandra palm. One little starling sat, seemingly not knowing what it should do. Other juveniles jostled about it and I watched as it stayed holding on to the palm seeds for dear life. Eventually an adult metallic starling arrived and showed the juvenile how to pick the fruit. With this little bit of encouragement the youngster was soon picking its own fruits. 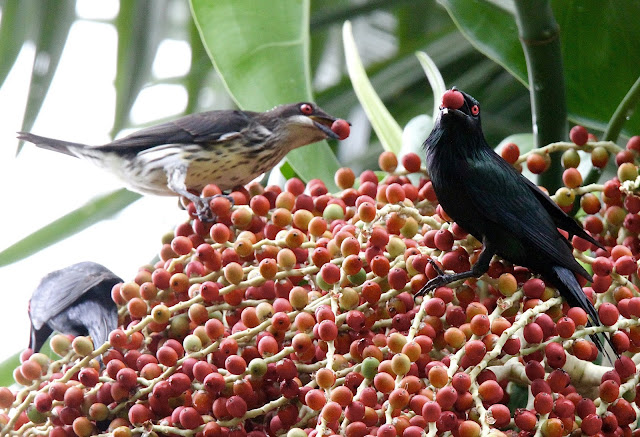 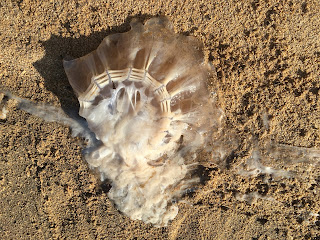 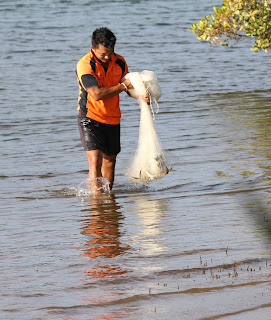 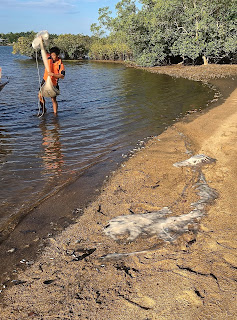 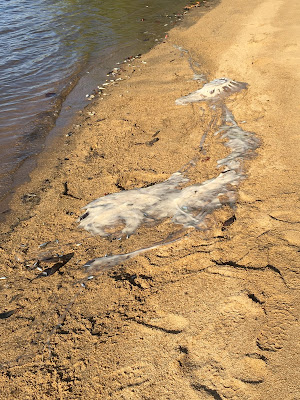 On Thursday afternoon a fisherman came onto the beach to drag for bait. The first cast was good and he managed to get a bucket of bait. The second cast brought up a hair jellyfish. The jelly fish had dozens of small fish in its stomach and the tentacles on this large jellyfish were 6 metres long. The hair jellyfish is found around the world, this tropical species is most likely Cyane. It is also known as snottie or lion's mane. The snottie refers to the large amount of slime released after an encounter with a net or person. The jellyfish didn't stop the fisherman trying for another catch. 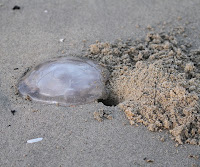 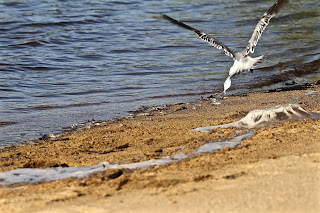 Several crested terns arrived, somehow knowing that there was a feed of fish on the sand. They ate the fish out of the jellyfish slime without any discomfort. I have noticed a lot of jellyfish on the beach over the last few weeks. Martin said there were thousands of jellyfish swimming around the reef at the moment.

I did not go for a walk around to the front beach this week, the low tides were in the middle of the day and I am not an Englishman, certainly not in this heat.

The heat is also getting to Charlie. Around 10 am he finds a shady spot and does not move until it starts to cool down after three. Before he goes to check out his harem he has a good scratch and then is ready to start the night's activities. 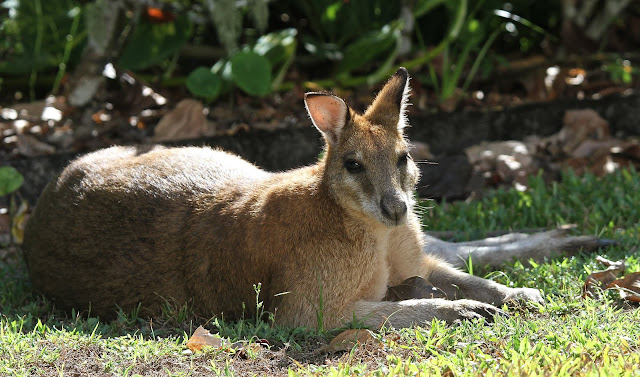 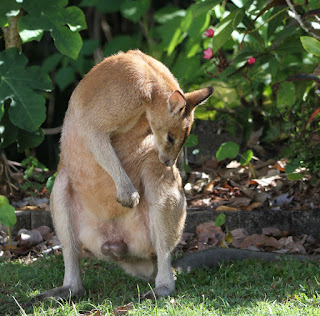 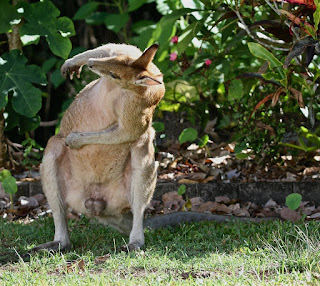 A number of Charlie's partners have joeys ready to hop out of the pouch. 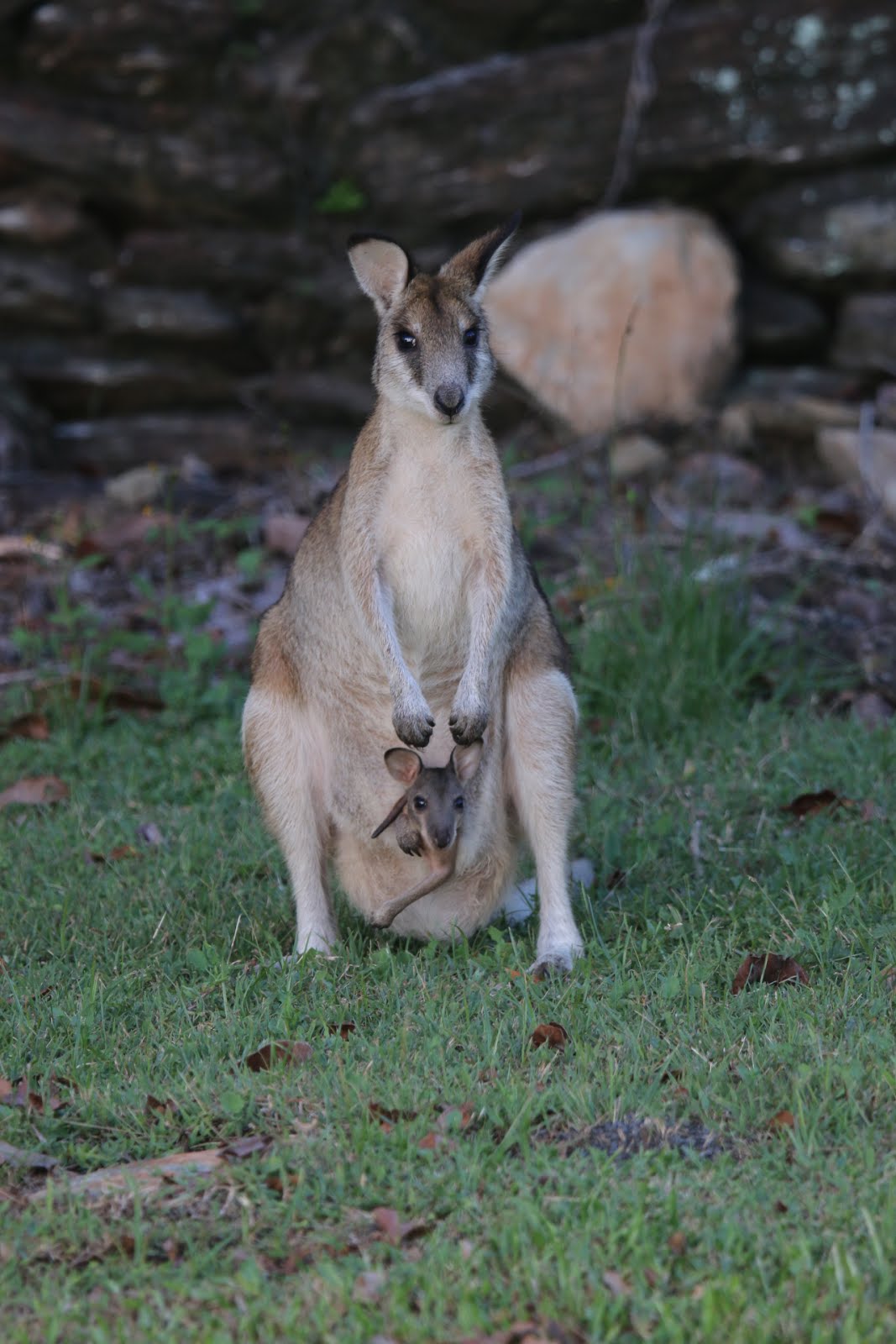 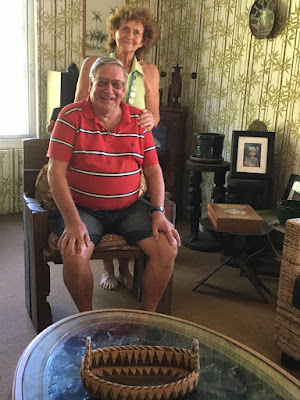 An unexpected visitor arrived this week, an old Coquette Point resident Joe Helmke, with his new wife Shirley, popped in to say hello. It was Joe's fist visit to Coquette Point in 30 years. 33 years ago, when I turned 40, I had a bit of a party and Joe arrived with a seat he made for me, he is quite a craftsman with timber. Joe was delighted to see I still prized his gift and he sat in it for a photo, left.

It was lovely to see you again Joe and great to talk about the old times at Coquette Point, we used to have some good parties! 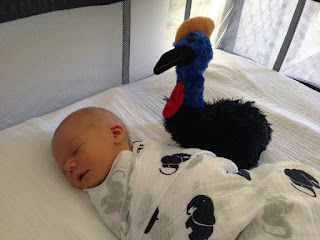 I received an email from Tom Lawton on Thursday, a new cassowary research officer has just made the team. Congratulations Liz and Tom on the birth of baby Cooper.

Tom, we are looking forward to seeing you chasing cassowary scats, through the mangroves, wetlands and rainforest, all over Coquette Point with Cooper on your back, while Liz takes it easy at home.


Cheers for this week and spare a thought for the people of Fiji.