A Shivering hello from Coquette Point,

Cold winter winds and dry air from a series of fronts in the Great Australian Bight have brought the first real winter weather to north Queensland in twenty years. Blankets and jumpers, musty from being stored away in bottom drawers, are once again out and in use. We are fortunate because, while the nights and mornings are cold, the dry thin air from the South quickly warms and by 9 o'clock the jumpers can be peeled off. A huge influx of internal Australian tourists, escaping the cold southern winter i'm sure, have arrived in FNQ to soak up the sun.  No doubt the low Australian dollar and the volcanic cloud over Indonesia would have influenced their travel plans this year. 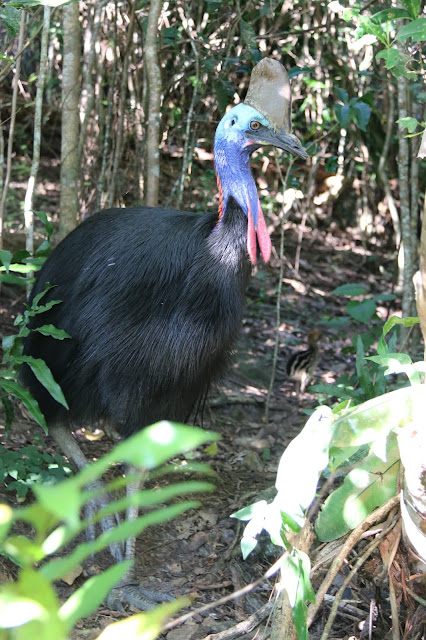 My breakfast of warm porridge and stewed apple went cold this morning. I no sooner sat down than I heard an unmistakable chirping from the rainforest. I picked up the camera and ran down the path and in the rainforest I saw cassowary Snout and beside him a tiny, tiny chick. Snout clucked a warning at me and the chick chirped in panic but I managed one photo before they turned and ran away.

It was so exciting to see this new addition to the cassowary population of the Moresby Range. It is a little disappointing that there is only one chick after Snout's long absence of three months. However, it is good to see that this senior male bird is safe and healthy and has produced a beautiful new chick.

Sorry I didn't get a good photo of the chick but I only had one chance, the tiny cassowary chick can just be seen, out of focus, on the right running off at a great pace up the track.


I wandered up the track on Tuesday and came across Ky. He was very curious to see me in his domain and walked up to the camera and poked his head at the lens. 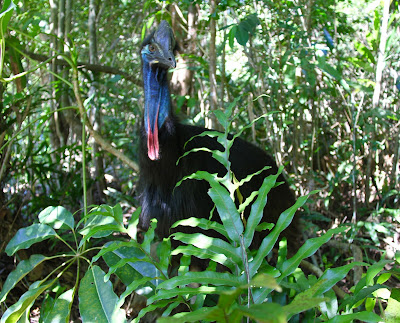 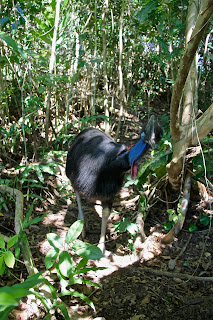 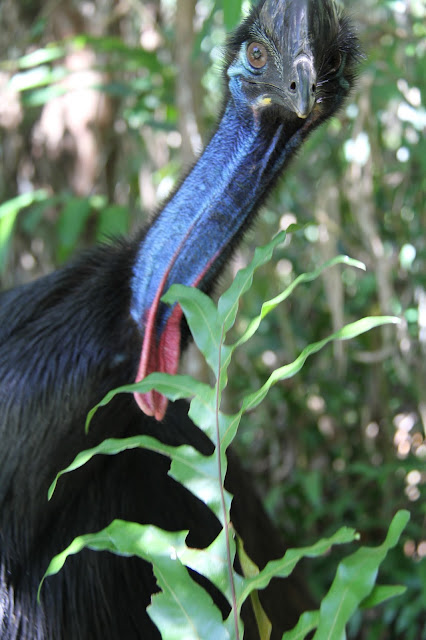 Young cassowaries are very curious and will investigate anything new in their surrounds.


Meg and Lee from Bribie are taking a winter holiday in the north. They drove to Weipa and are now on their way home. One of the items on their agenda was to see a cassowary. So when young Ky came walking through the nursery today they were absolutely thrilled and the cameras came out. Ky dutifully posed before striding off. 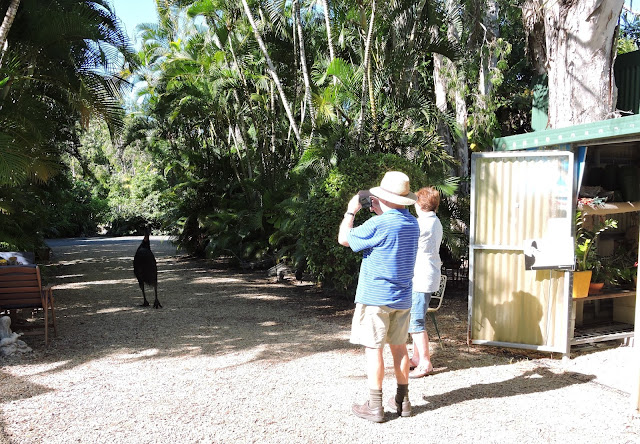 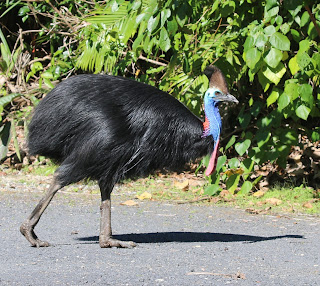 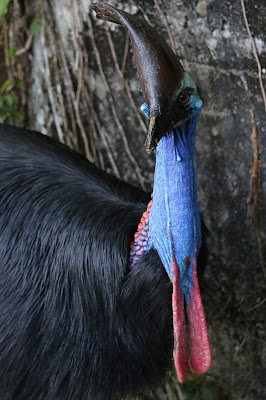 Cassowary Jessie has been hanging about this week and chasing Ky from time to time. With the new chick on the scene I do not know how long Jessie or Snout will allow Ky to stay in this area. Jessie did appear a little less aggressive, than she has been, when I took the photo on the left yesterday. Next week will be interesting to observe the dynamic change that will occur with the arrival of Snout's new chick. 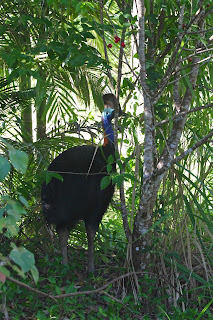 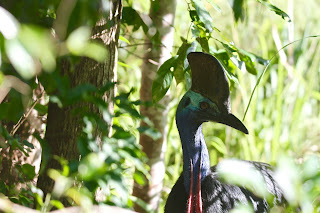 On Thursday morning, just after opening the nursery gate I saw a cassowary in the gallery rainforest in the neighbouring property 27V, the cassowary was eating the rosy apples from the Phaleria clerodendron tree, see left. It is a cassowary I have not seen before and I managed to get good ID photos. 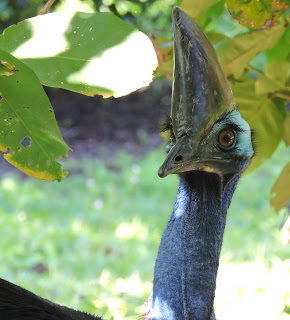 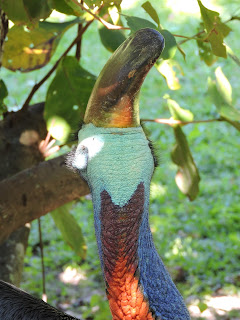 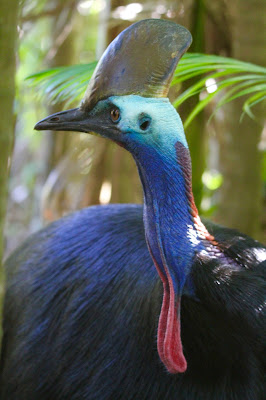 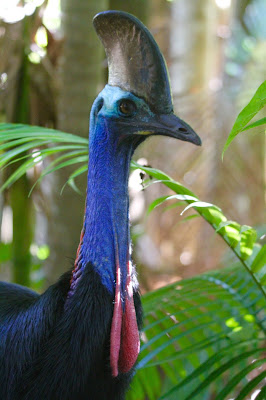 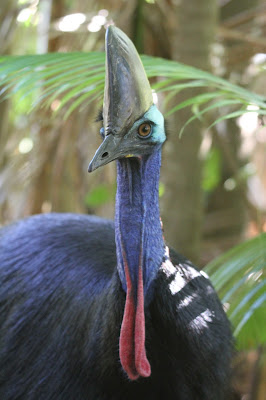 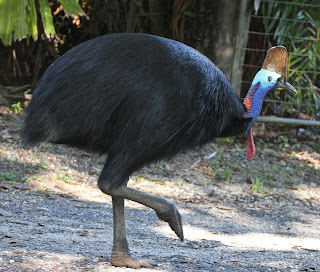 Diana O'Brian said she had seen a new cassowary passing through the back of her property. It appears the bird was walking up from the Coquette Point Wetlands then walking down towards 27V. This cassowary has a very distinct demarkation of his rear neck colours with a deep scallop at the top of the neck. The cask has a slight lean to the right and is mostly coloured honey brown. The wattles are of a medium size, the left a little shorter and they have, what looks like a piped margin. The cassowary appears to be around five years old and  when it saw me walked quickly across the road, into the nursery, through the orchard and up into the rainforest above my top road. It appeared to know where it was going. I have called this cassowary July, after the month, until I hear if this bird has been named by someone else. This cassowary is possible one of the chicks from the 2010 season when seven cassowary chicks reached sub-adulthood at Coquette Point. 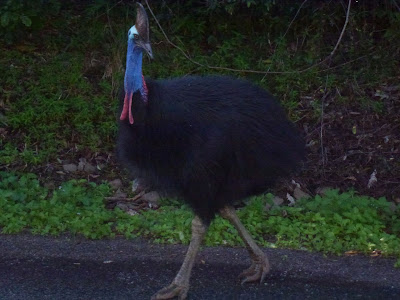 A similar incident was reported in the Innisfail Advocate this week and it appears tourists are feeding cassowaries from their cars in order to get a better opportunity for a photograph. When this happens it is a death sentence for the cassowary as the cassowary will see motor vehicles and roads as a source of food and that is nothing less than a game of Russian roulette for the bird. If you see this occurring please explain to the person the danger to the cassowary and to other road users. A collision with a large cassowary in a small car could be fatal.

Low tides in the late afternoon this week offered the perfect opportunity for walking. When the tide really goes out a Coquette Point the sand flats are exposed for a mile out to sea. The long shadows of the few remaining trees from the once vast mangrove forest of Coquette Point are slowly falling to the the residual herbicides contained in the sediments carried from farmlands in 'wet events'. Note Thopmson Point is the inside point in this photo, more about that later. 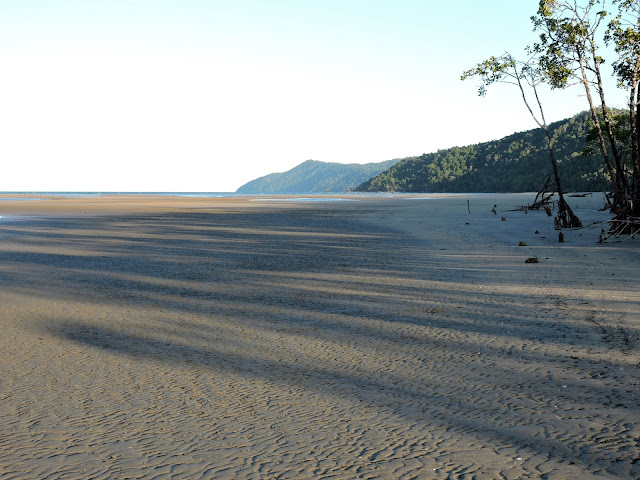 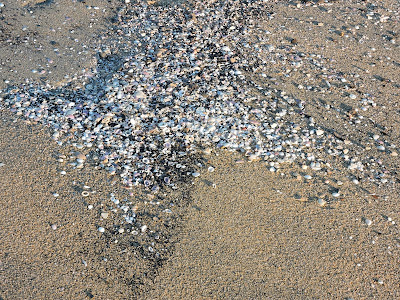 In a number of areas along the beach
I saw great piles of shells which had been dumped by the waves from the recent strong winds. I had not seen so many shells washed up on the beach like that for many years. 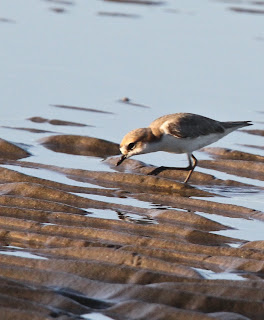 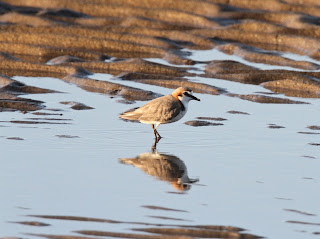 When the tide goes out lots of puddles are left for little red-capped plover to search for titbits like long slimy worms. 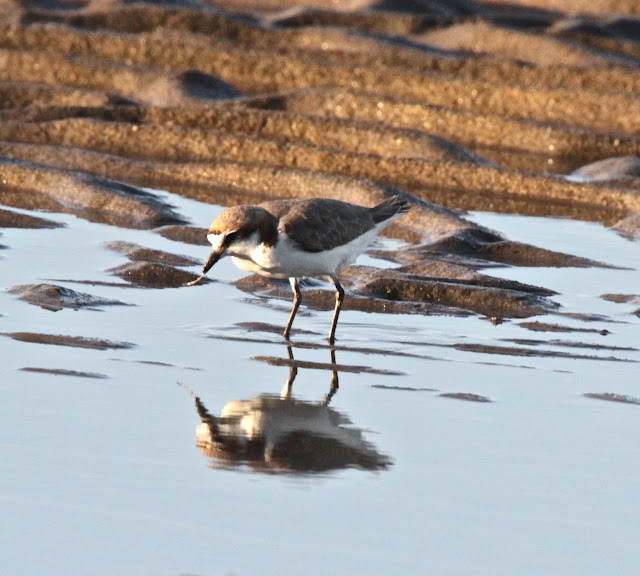 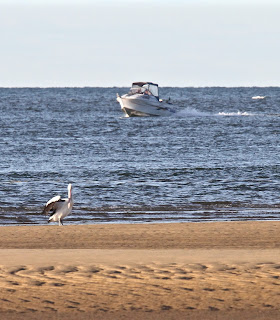 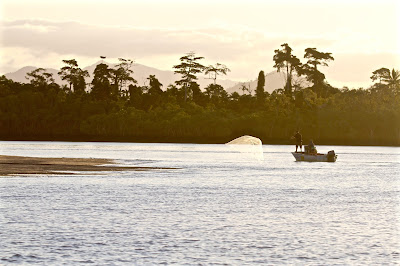 The crested and gull-billed terns were all fishing out to sea and even beach-stone curlew was on the very outer sandbar. As I returned back along the beach I saw a number of small boats coming back from a days fishing on the reef in the now calm condition. As I watched a pelican had also finished his days fishing and was starting to preen his feathers.

In the estuary another fisherman was casting for bait as two outrigger canoe club boats paddled past on a training run in the setting sun. 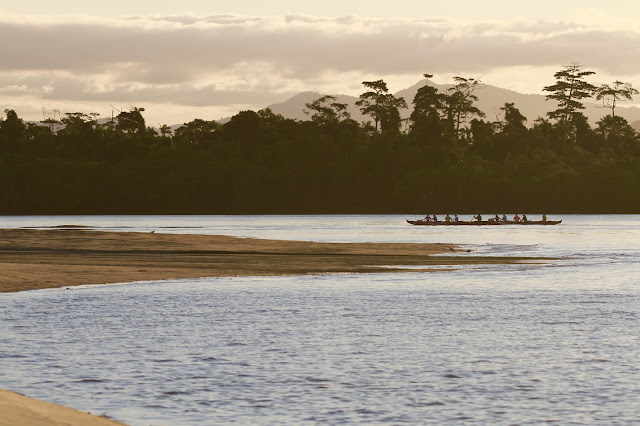 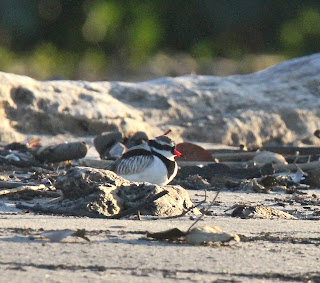 When I walked past the rookery I noticed a little bird sitting huddled up in the debris on the edge of the rookery. Unfortunately I disturbed him and he ran along the sand away from me. The bird was a black fronted dotterel, a common bird widespread across Australia but it was the first time I had seen this bird at Coquette Point. 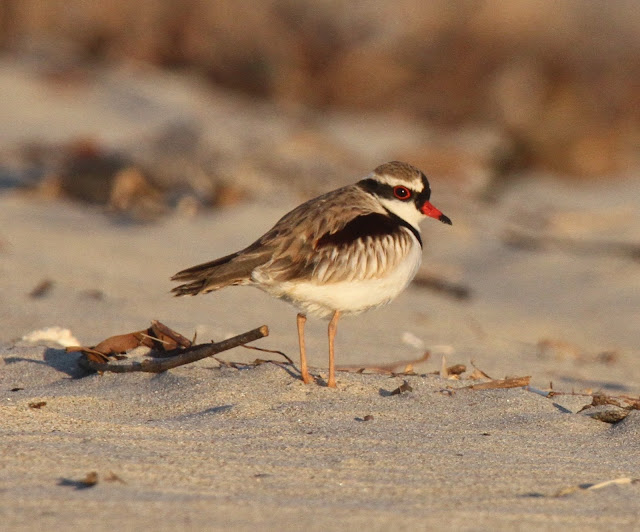 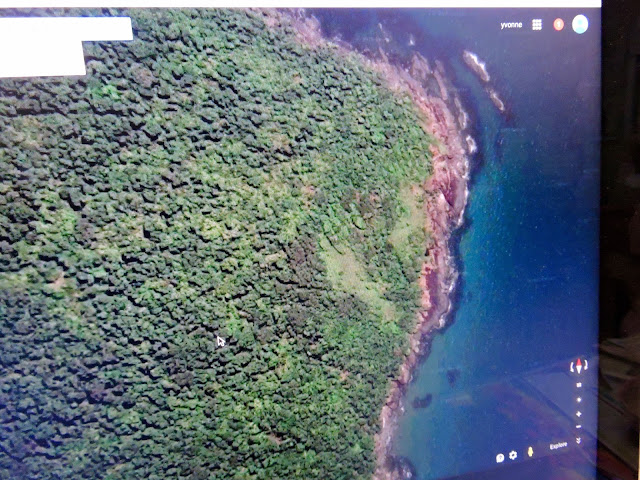 Chris Roach, the Resource Ranger, Innisfail, for Queensland Parks and Wildlife Service, (QPWS) visited stakeholders and National Park neighbours this week. Chris advised that QPWS are planning a series of controlled burns over the next two months in National Parks in FNQ. The aim of these burns is to maintain Regional Ecosystems and to reduce forest fuels.

Baldy Knob, above Thompson Point in the Moresby Range National Park, is a well know landmark for boaties. It is a grassed area on very shallow soil and schist. It is not known why the knob did not support trees, but over the past decade trees are starting to take hold in the area; see map above.  This would lead one to ask was this area once a site of Aboriginal occupation? I cannot find any record of archaeological investigation of the site. However, the QPWS have decided to maintain the grassed area, they will drop incendiaries from a helicopter on the area so as to kill the trees that are emerging through the grass thus maintaining the grassed feature of Baldy Knob. It is QPWS's expectation that the fire will self-extinguish and only one hectare of the Moresby Range National Park will be burnt.

If you have any concerns about these burns please contact Cameron Sharpe, Senior Ranger, Innisfail Management Unit, QPWS 40483718.

This evening at sunset a distinct smell of smoke was in the air and could be seen through the setting sun. The failure of the wet season rains this year means that there is a lot of dry grass around and the soil moisture level is very low. In the lead up to this years' fire season, the Queensland Fire and Rescue Service (QFRS) is proactively focusing on assisting property owners with hazard mitigation strategies to assist them to prepare their properties. QFRS will carry out site inspections and provide advice to landholders on how to prepare for the fire season. Please refer to QFRS website www.fire.gov.au or phone Innisfail Fire Station 40610601.

I have expressed my grave concerns to QPWS about the very poor soil moisture level at the moment and the ability of fires to self-extinguish in these dry conditions.  Might the mitigation strategies actual start the fires the QPWS and QFRS are trying to prevent?

I also expressed grave concerns about the use of incendiary drops from helicopters. When this is done in a blanket grid across the area to be burnt there is no fire-front for animals to escape. Particularly ground dwelling animals like cassowaries.

Arson is a problem all over the world but most countries tackle it by maintaining a well resourced quick response team. 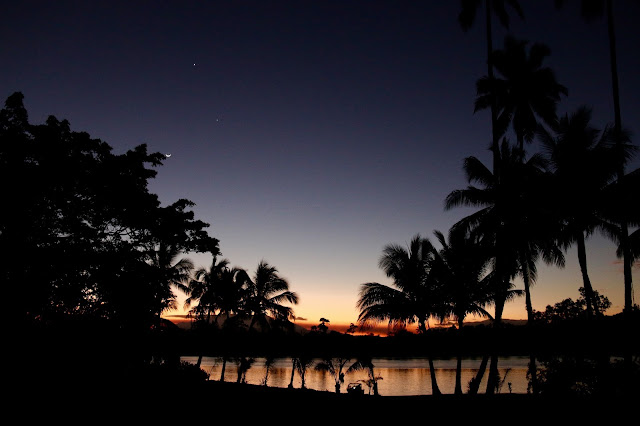 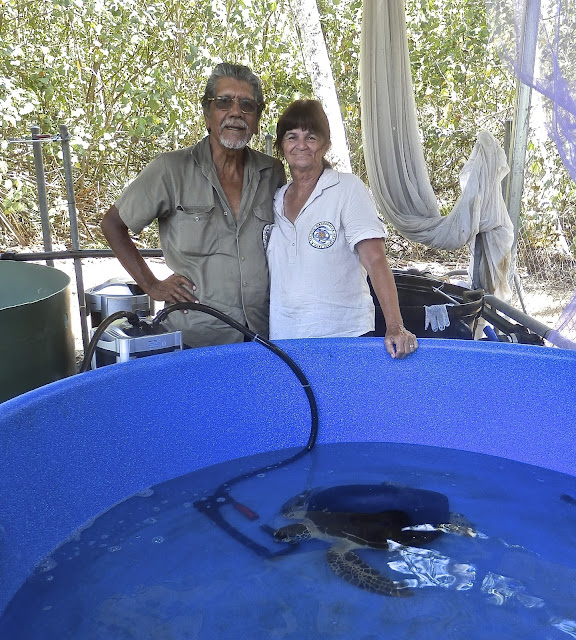 Mandubarra Land and Sea Inc. invites everyone to attend the release of Green Sea Turtle Etty B at Kurrimine Beach Boat Ramp 9am on Saturday July 25. Refreshments will be provided and a donation box will be in place for anyone wishing to participate in the Centre.  Nellie is delighted that Jennie Gilbert from the Cairns and Fitzroy Island Turtle Rehibilation Centre has donated the balance of the funds for a tracker for Etty B.  The tracker will be fitted and tested on Thursday this week before Etty B is released. Wonderful work Henry, Nellie, Alan and the boys in looking after Etty B. A little bird has told me it will be Henry's birthday on Saturday.  Cheers for this week,                                                              Yvonne