At long last we have rain on the Wet Tropical Coast. With the cloud cover the temperature today reached a maximum of 27 degrees, around 10 degrees cooler than what we have been experiencing. It is such a relief. However, the rain is coming from a south-east ridge along the coast and not the monsoon. Next week it will be different with a surge in the monsoon expected and lots more rain.

On the political scene it is only getting hotter. They say a week in politics is a long time, it certainly has been for some Australia politicians. Next week is shaping up for political drama both on the Australian Federal and State of Queensland stage. Meanwhile, all we can do is go about our business and sit back and watch all the shenanigans.

One good piece of news this week has been the release of journilist Peter Greste from prison in Egypt. On his release Peter put life into perspective when asked, what was the first thing he wanted to do? Peter answered, "Watching a few sunsets. I haven't seen one of those at all for a very long time." 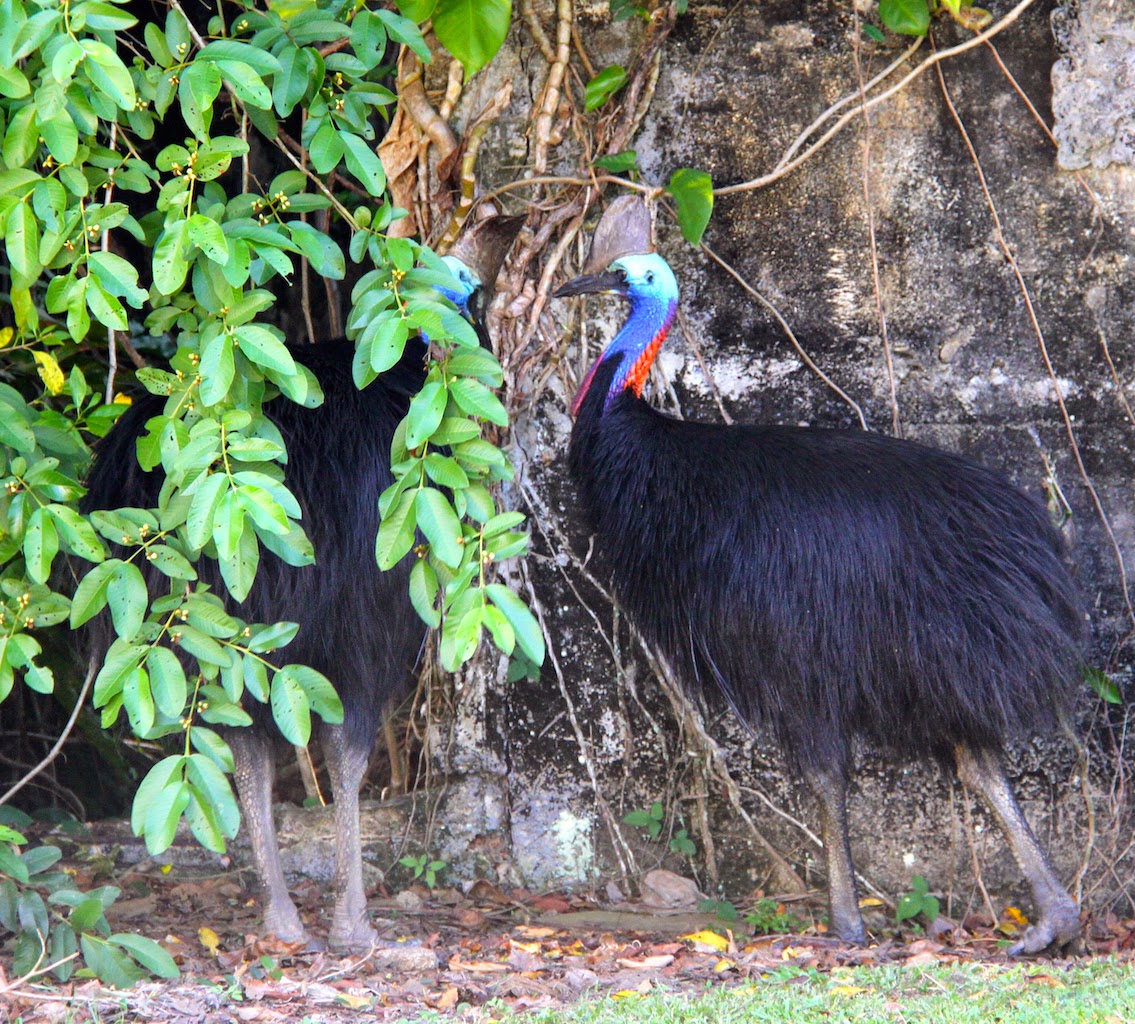 Love is in the air with the coquettish cassowaries of Coquette Point. Cassowary Snout and Jessie's courtship continues and I occasionally catch a glimpse of a personal moment between the two birds. 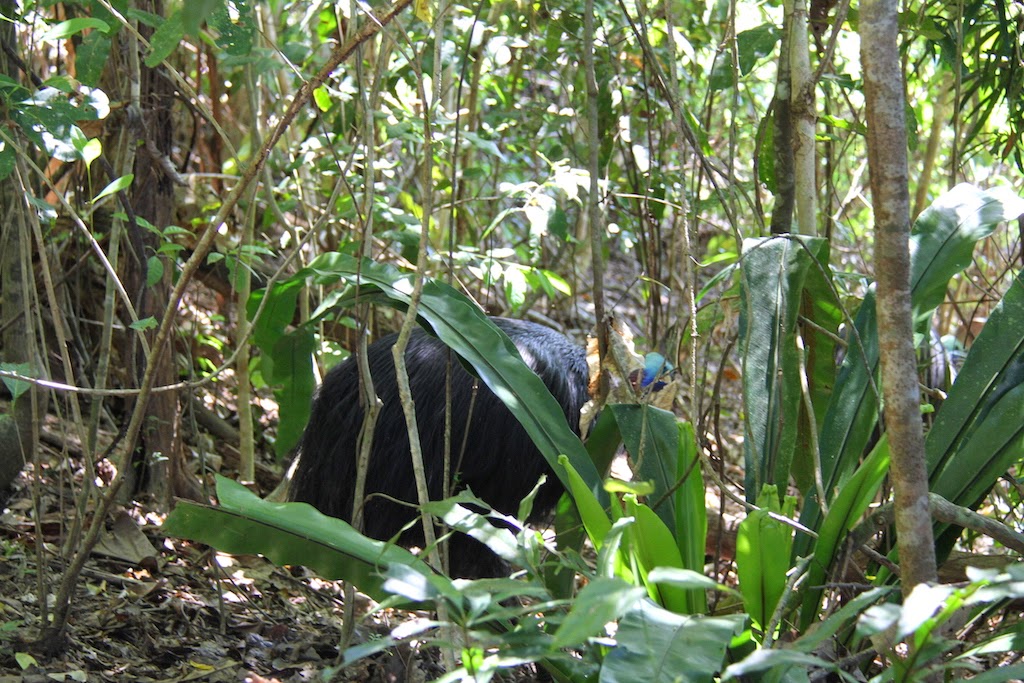 I followed them as they walked through the rainforest, out onto the lawn then down into the mangroves.

The blue bin in the photo below is on the western end of my property and was placed there four years ago by QPWS to use as a supplementary feeding bay for cassowaries following cyclones. The bin has been placed beside a known cassowary track.
It is worth remembering that this week is the fourth anniversary since Cyclone Yasi. 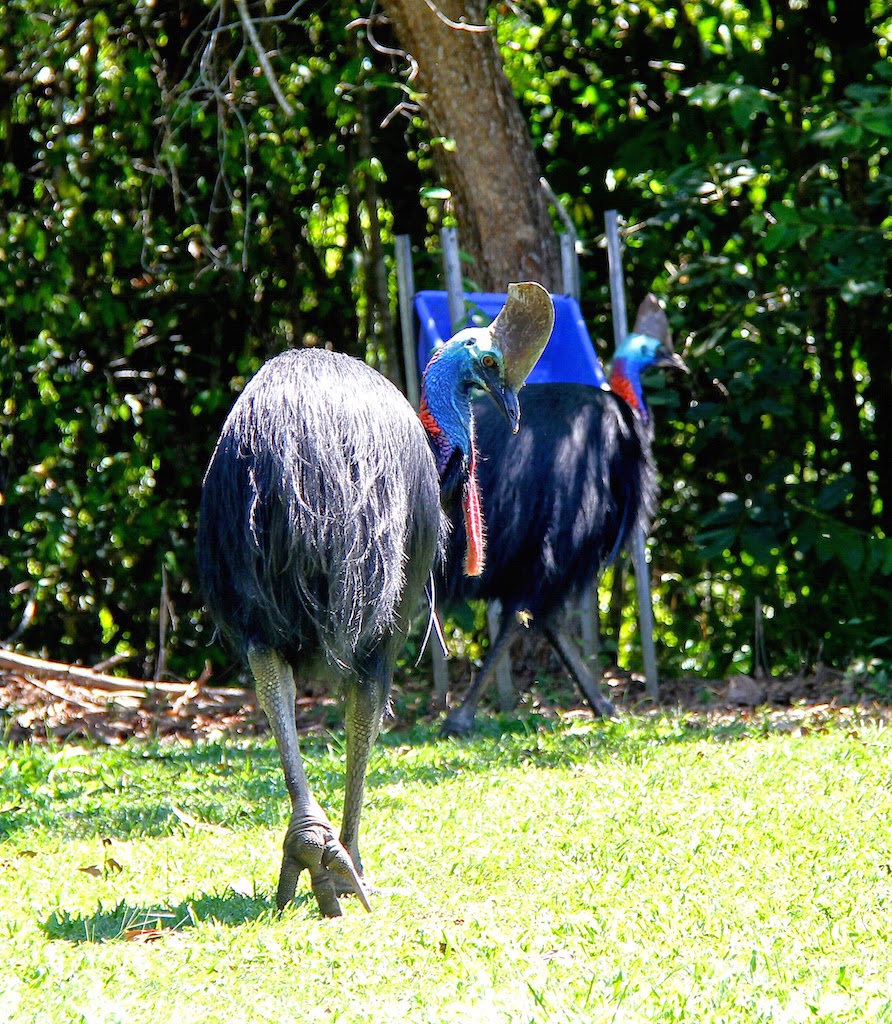 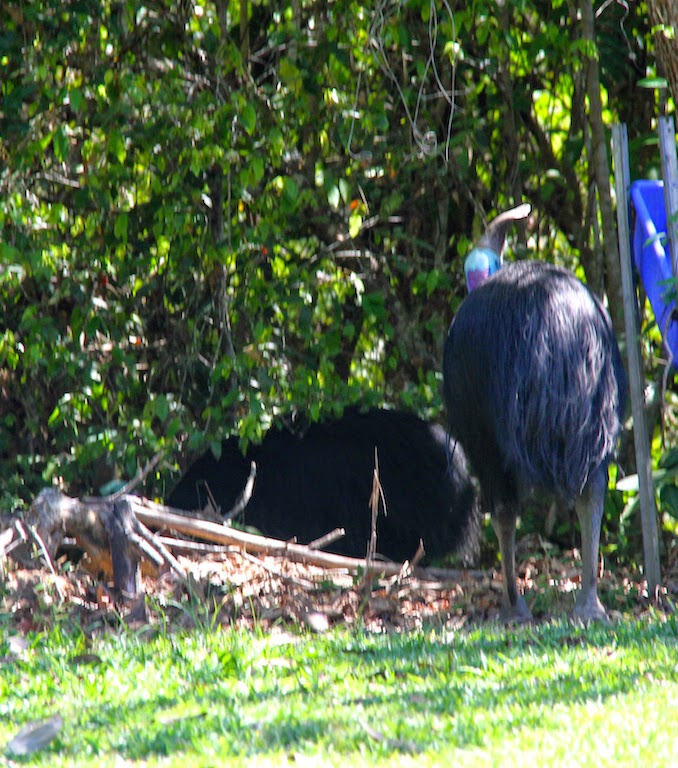 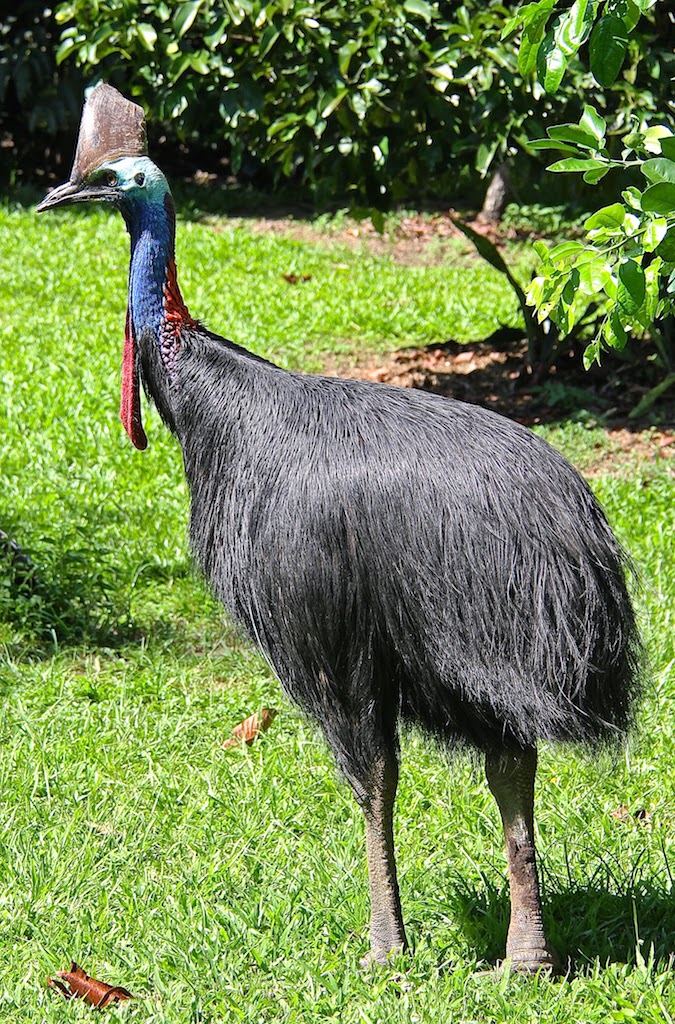 On Wednesday I heard a fierce grunting from the cassowaries over by the swamp, I ran to see what was up and caught a glimpse of Snout chasing Ky. Jessie circled and went into the orchard and I saw her stretched up watching but did not enter the chase.  Jessie eventually walked off and I briefly saw her together with Snout the next day.


Ky returned to the swamp later in the afternoon and after he had a swim he seemed to pull  harder than normal at his feathers as he cleaned and dried them. 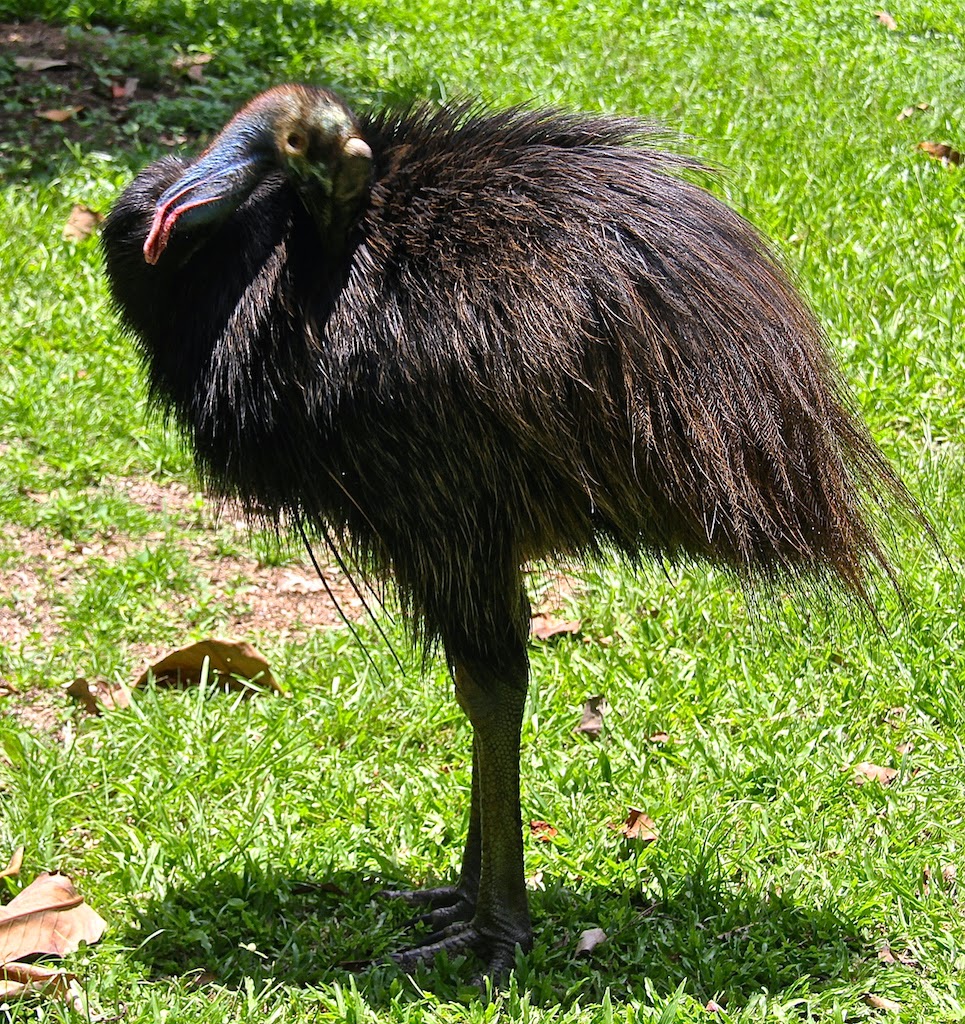 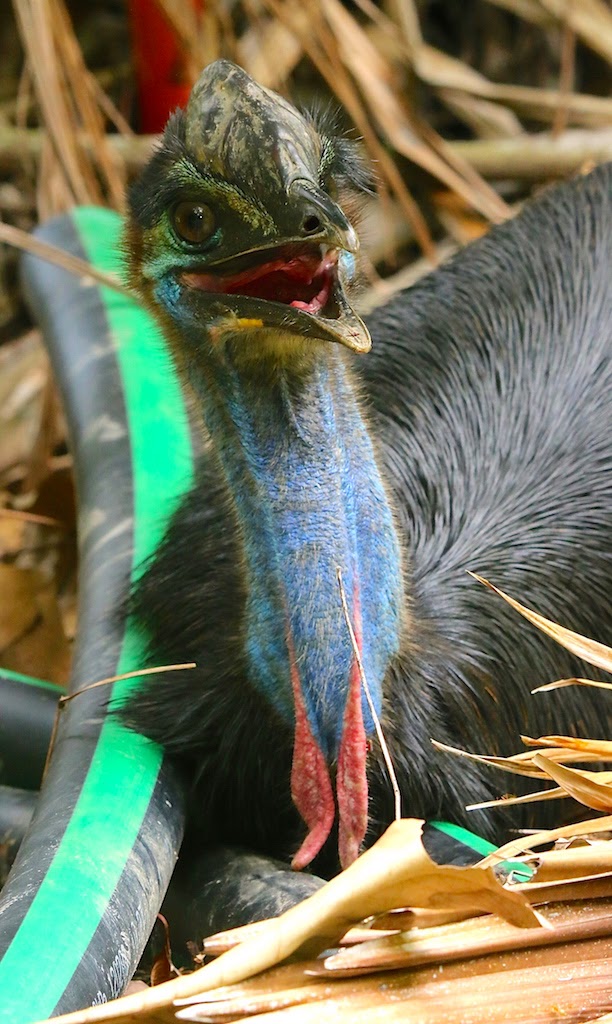 Ky has been feeling the heat and one of his favourite places to rest is in the orchard under a tree and up against a roll of irrigation pipe. It is as if he has made the coil of black and green pipe a surrogate father.

Ky's casque is visibly growing every week and this week a grey pattern with little knobs appears to be developing on the casque.


Taggs reports that Cassowary dad Hagar has parted from his chick Rainbow. Rainbow is three months younger than Ky, which makes him one year old. Unfortunately Taggs was not able to send me the  photos. There have been several sighting of the Cassowary dad with the two chicks near the Nind's Creek Bridge. It is great to hear they are doing well and a credit to the careful driving by the residents of Coquette Point. 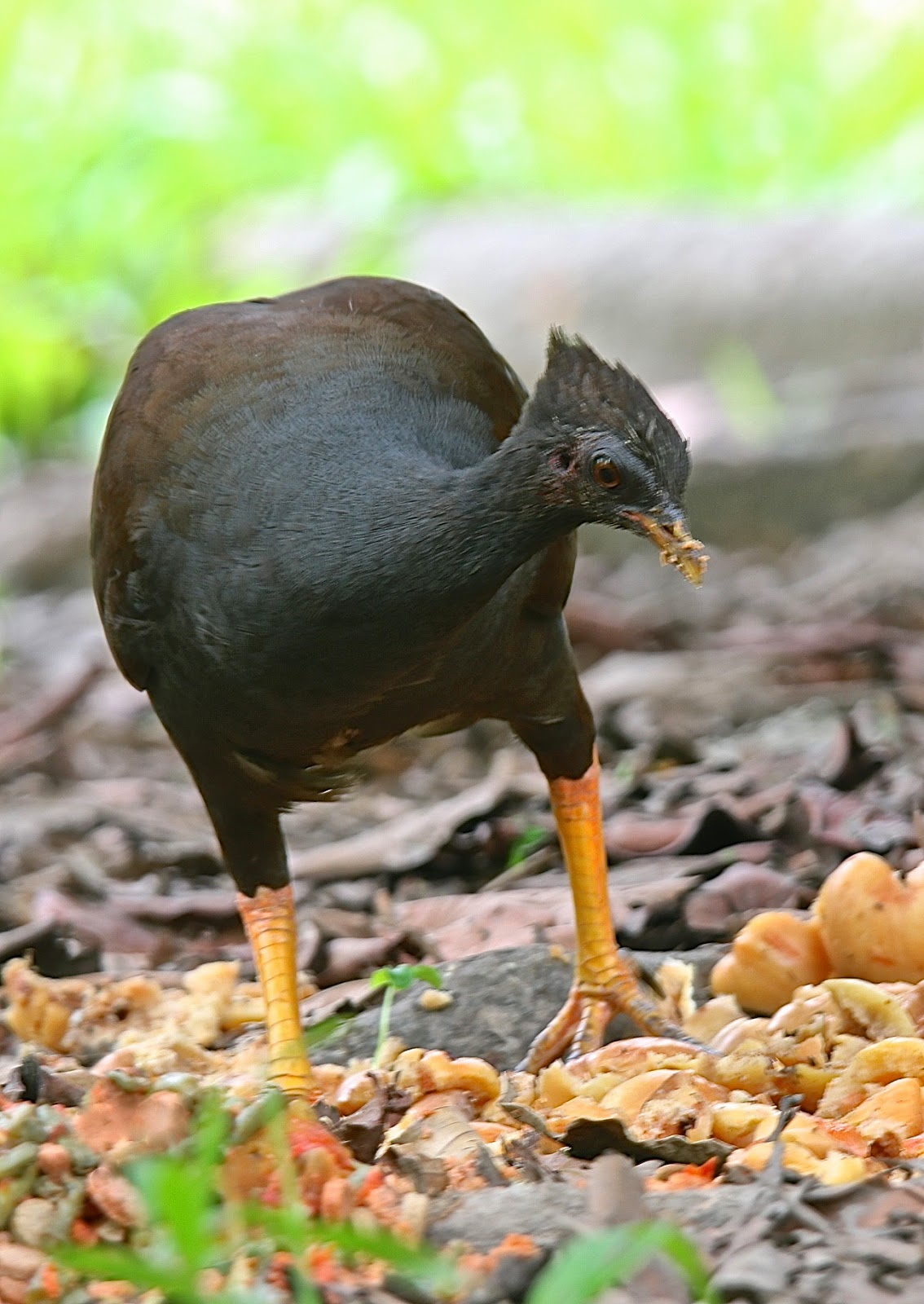 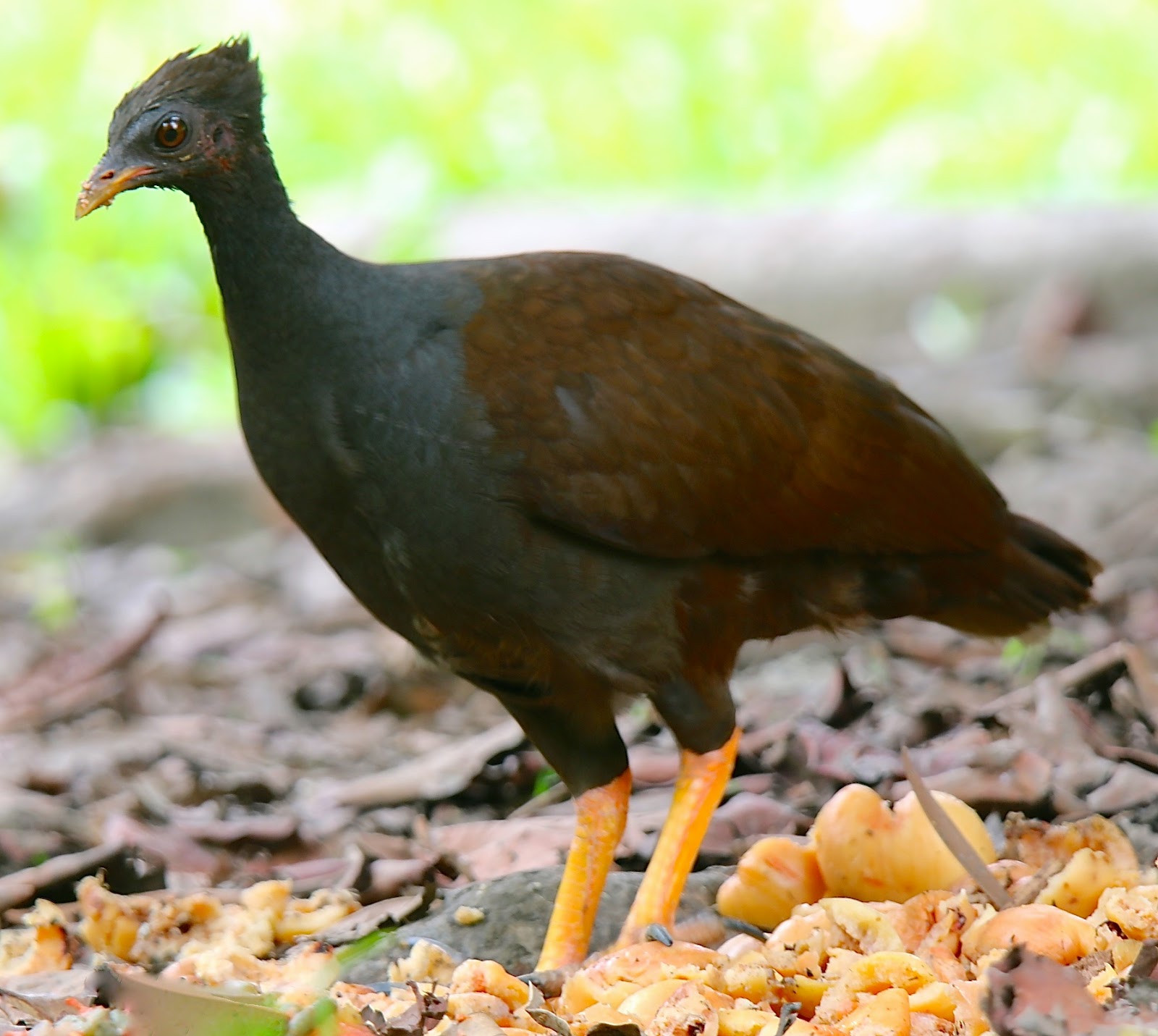 I collected some white apple fruits and removed the flesh to propagate the seed. I discarded the flesh in the orchard and within minutes an orange footed scrub fowl was scratching and eating the pulp. The orange-footed scrub fowls have been very busy of late tending to their mound and pinching pine bark from a heap I have for the nursery use. They are very industrious creatures. 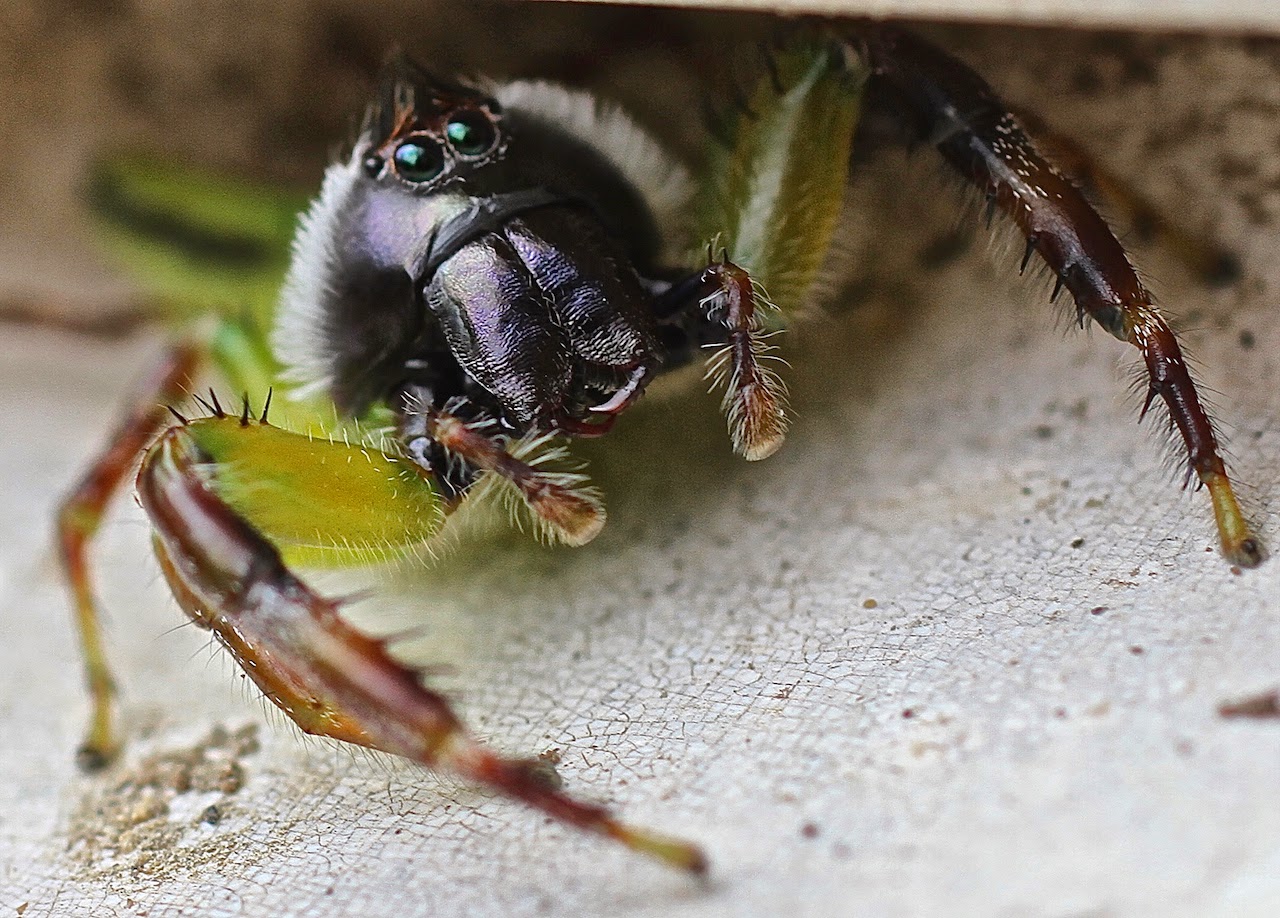 Lots of jumping spiders around again this week but I only bothered to take a photo of this very large male, Morpus mormon. He lowered his fangs once and I noticed one fang, see photo right, was white apparently newly grown. This could be the same male I took a photo of a month ago which was missing his left side fang. As spider guru Robert Whyte has informed this blog before that spiders, particularly jumping spiders, will regrow missing body parts with every moult.  He certainly has increased the length of his white fringe and mohawk; a charmer in anybodies language. 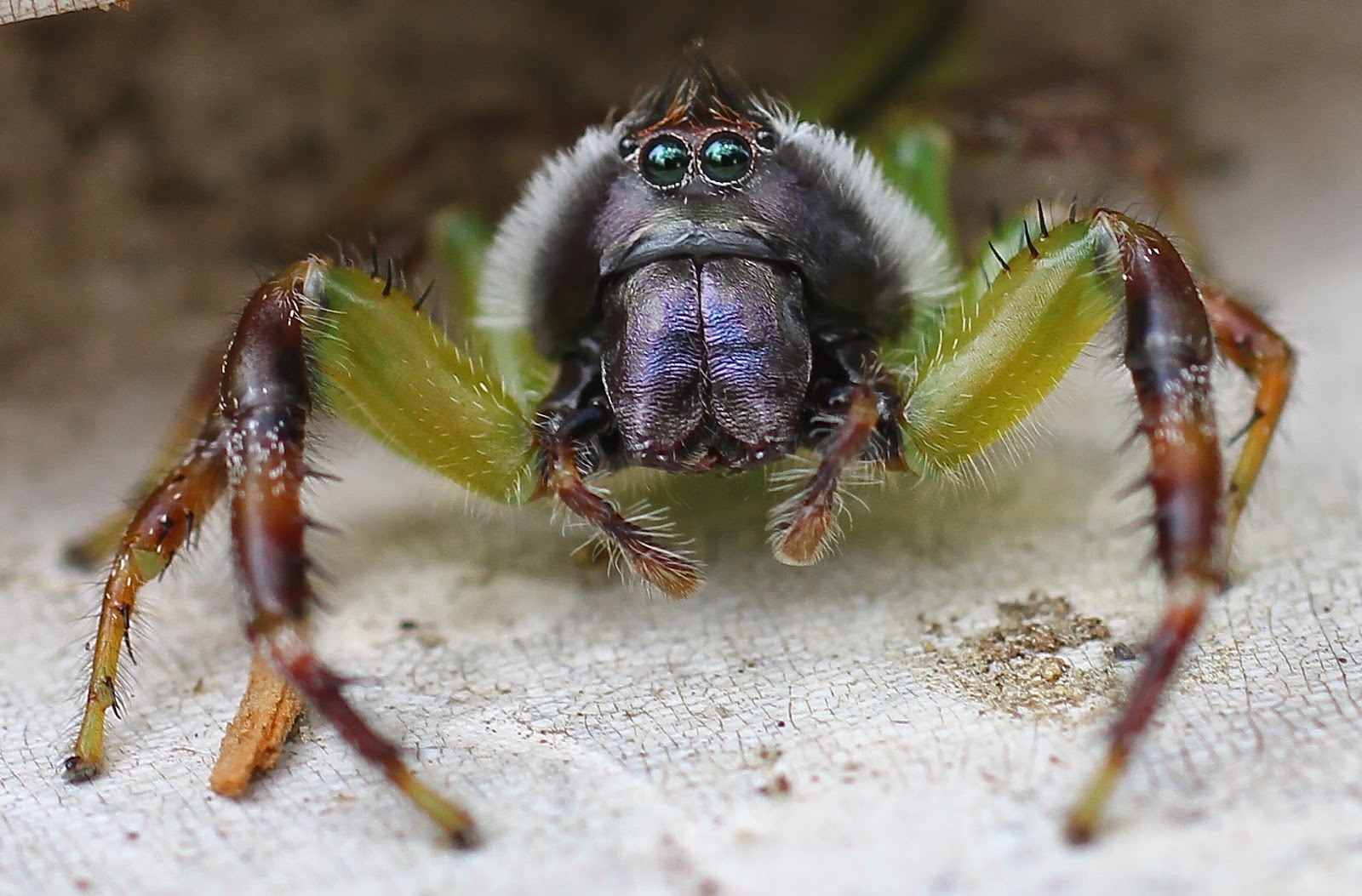 On Thursday afternoon, before the rain set in, I went for a walk around to the front beach to see what shorebirds were still present.  I was happy to see a number  of crested terns fishing in the river and more on the sandbanks out the front, about 20 crested terns altogether. No gull-billed terns or little terns were sighted. 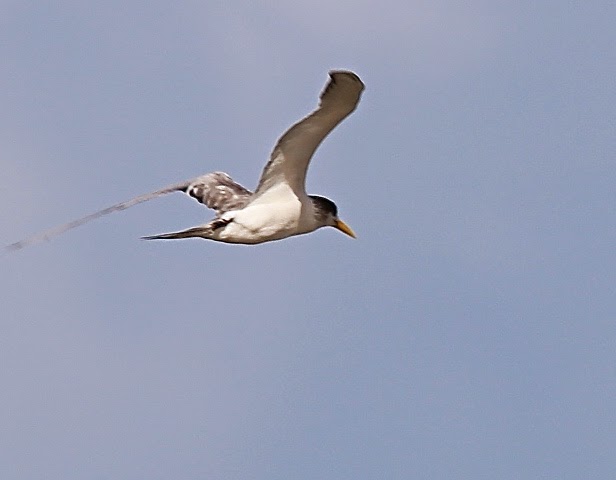 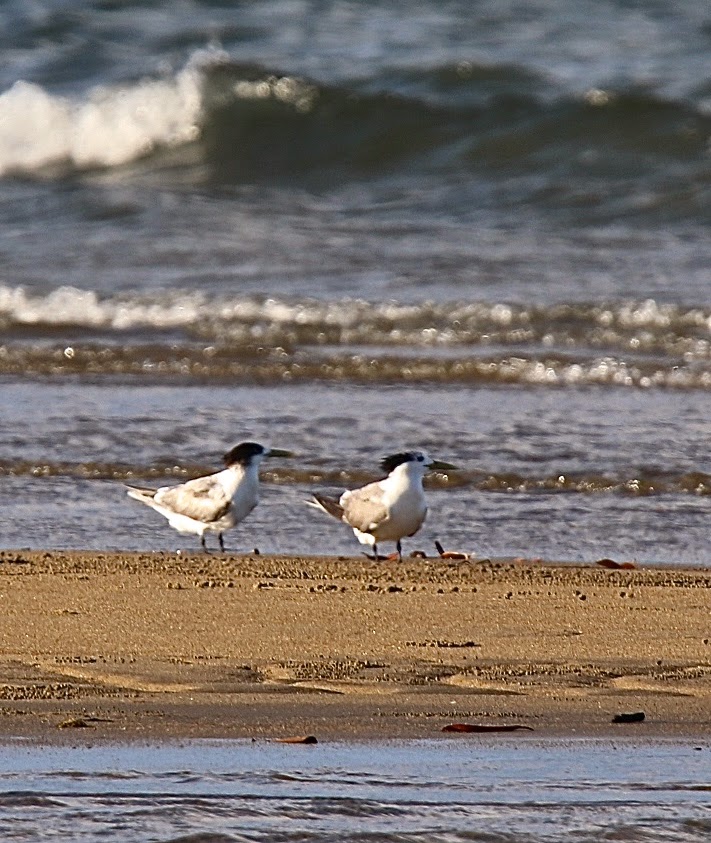 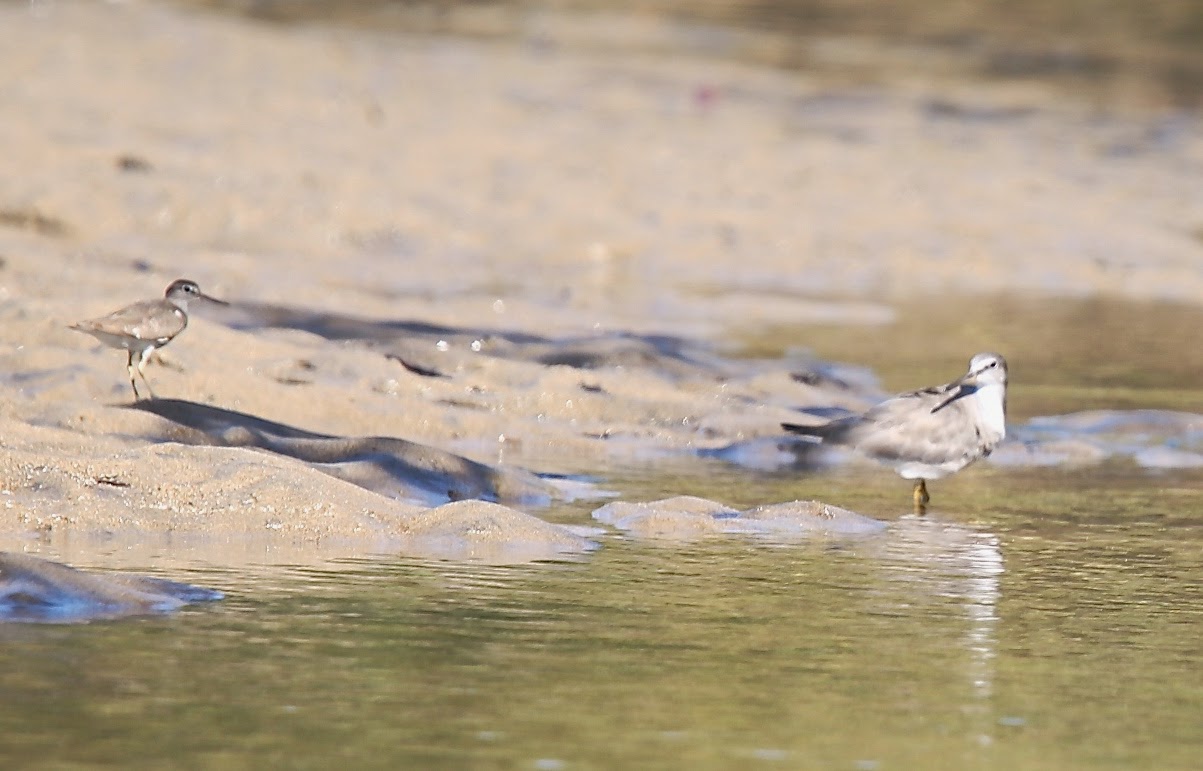 Grey-tailed tatler was back on the banks of Crocodile Creek with his mate common sandpiper. They were missing last week during the big tides and I thought they had gone north to commence their migration journey. 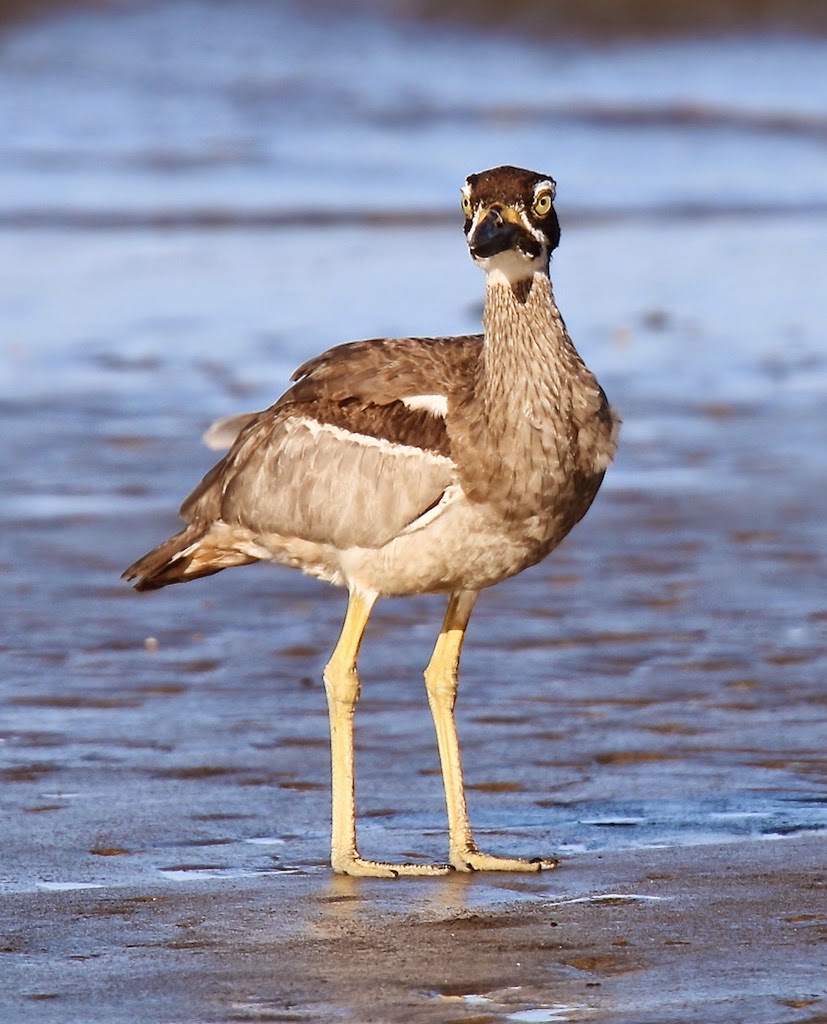 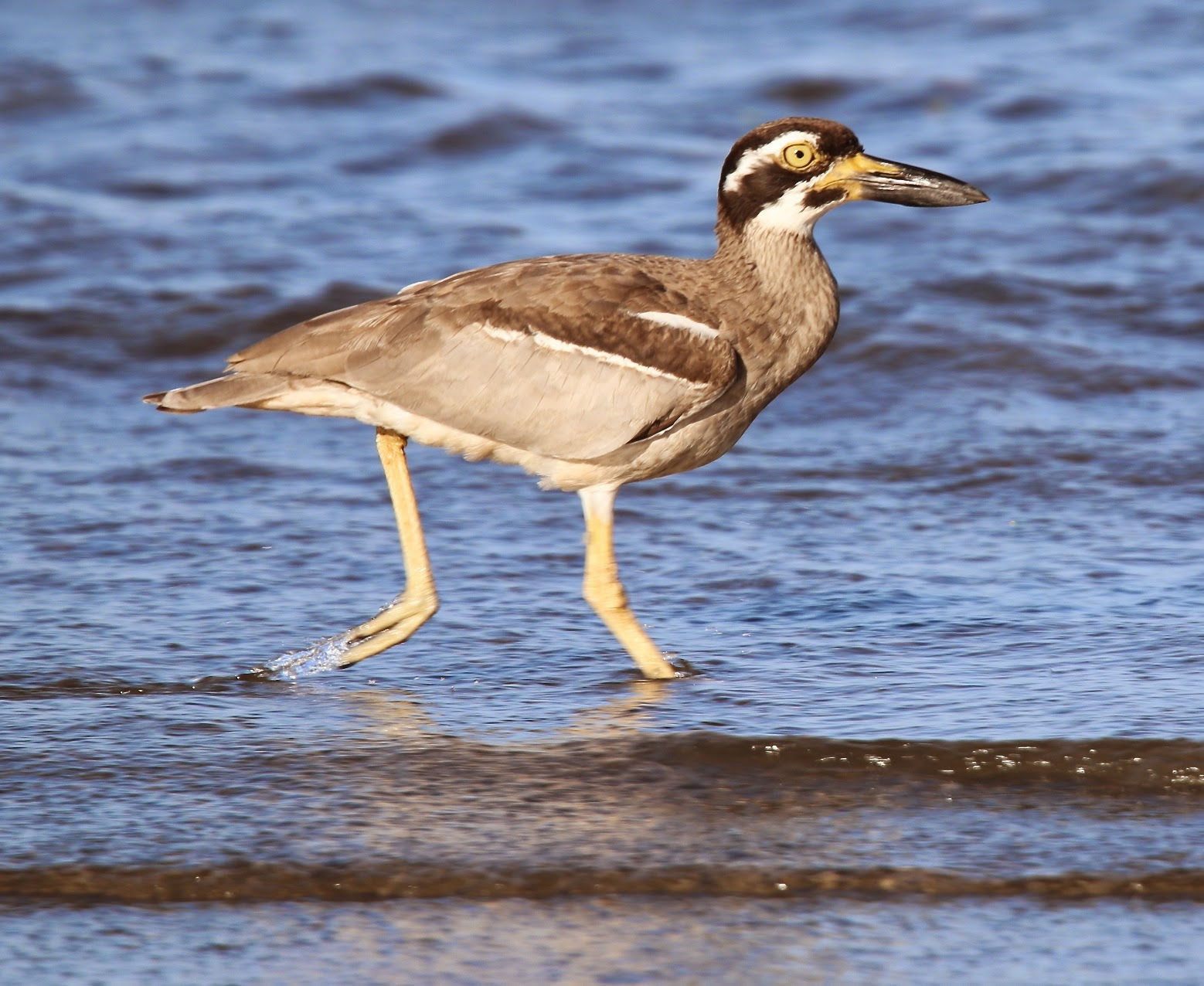 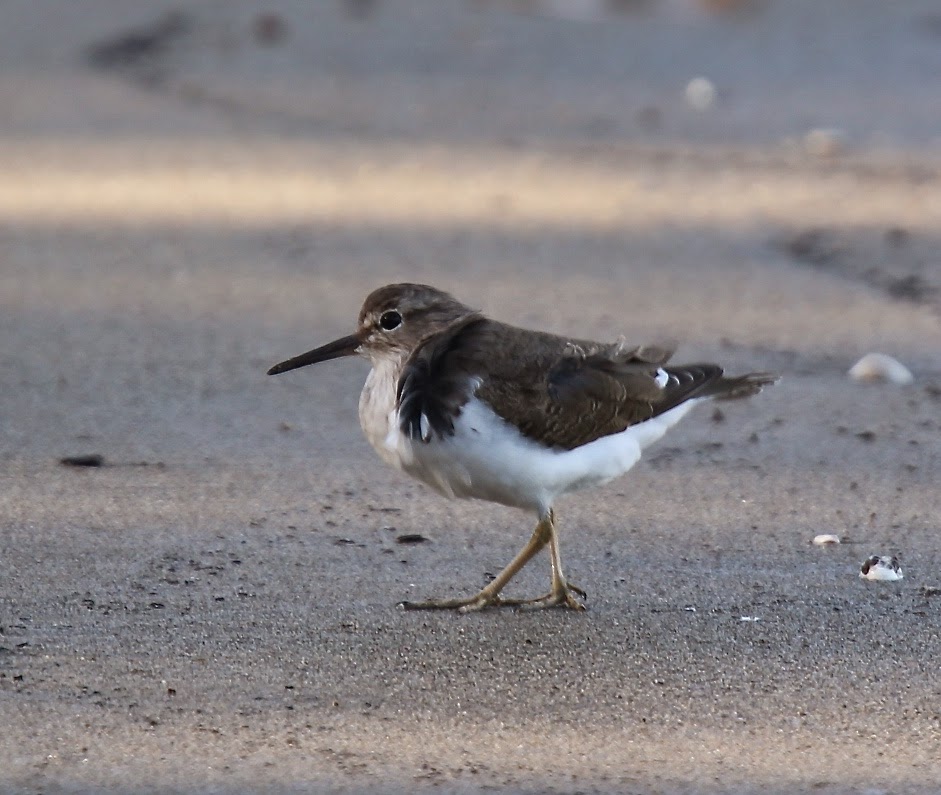 A   beach stone curlew came running out from the high dunes behind the rookery where the shorebird sign stands.  He ran down onto the beach, and  looked crankily at me and watched as I passed.

As I turned the corner and walked south I saw two more common sandpipers and another grey-tailed tatler. 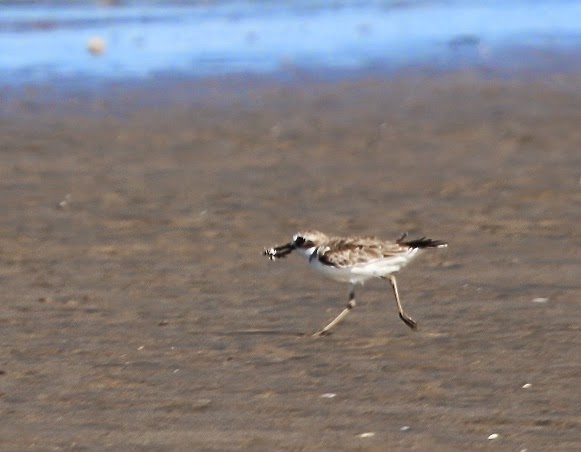 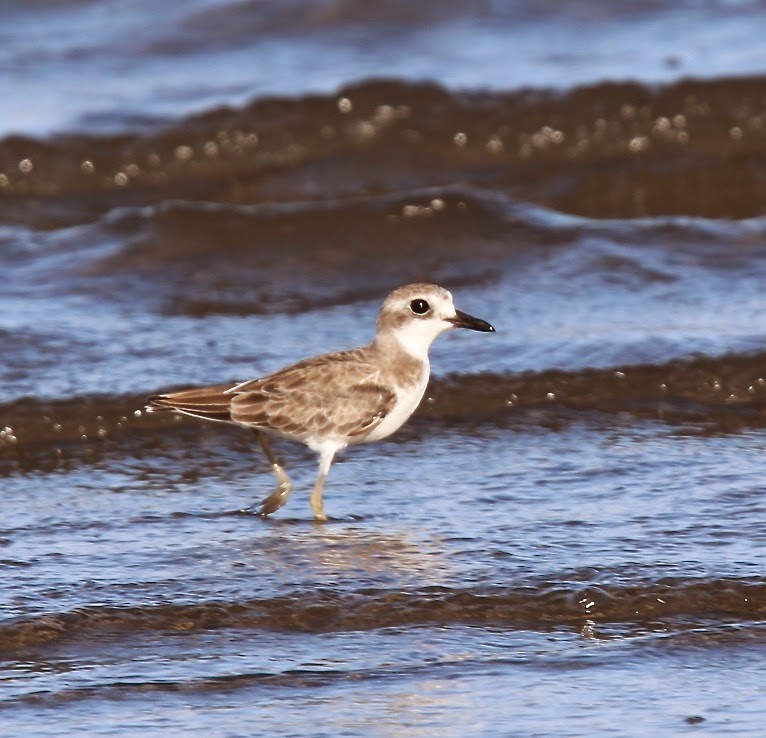 Greater sand-plovers were running along the surfline and another one caught a crab on the sandflats and with the crab clutched in his beak was running around in circles trying to work out what to do with the wriggling crustacean.


Further down the beach I was surprised to see that some Pacific golden plovers had returned to the beach. Some were fishing alone others had joined lesser sand plovers and common sandpipers. 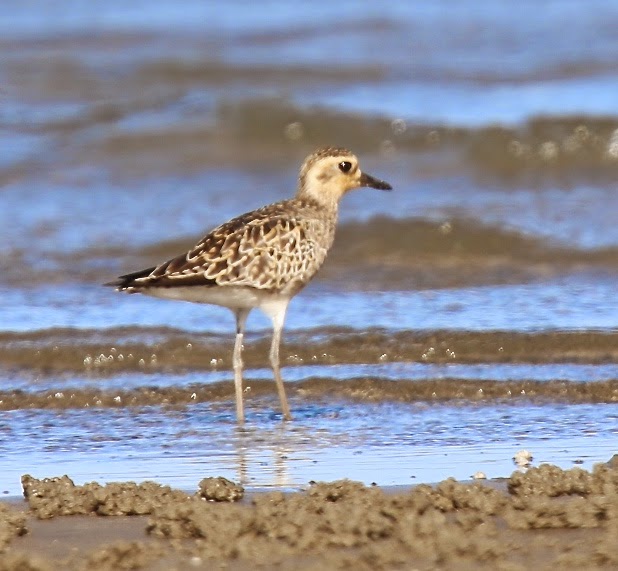 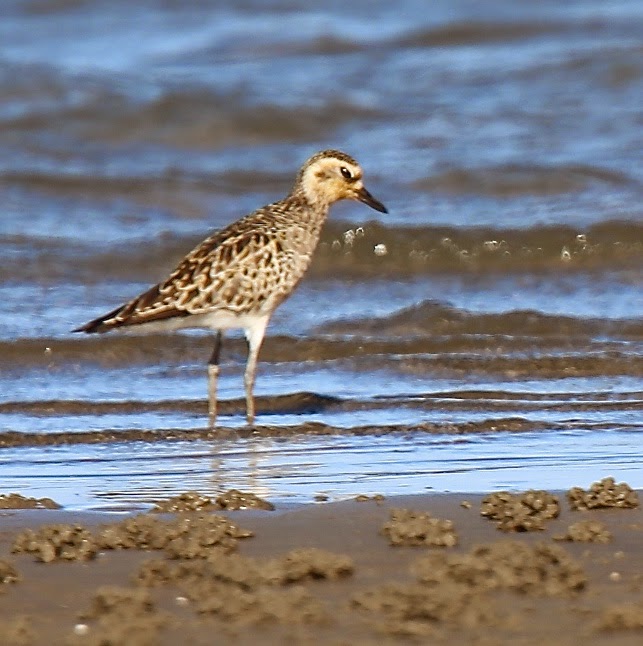 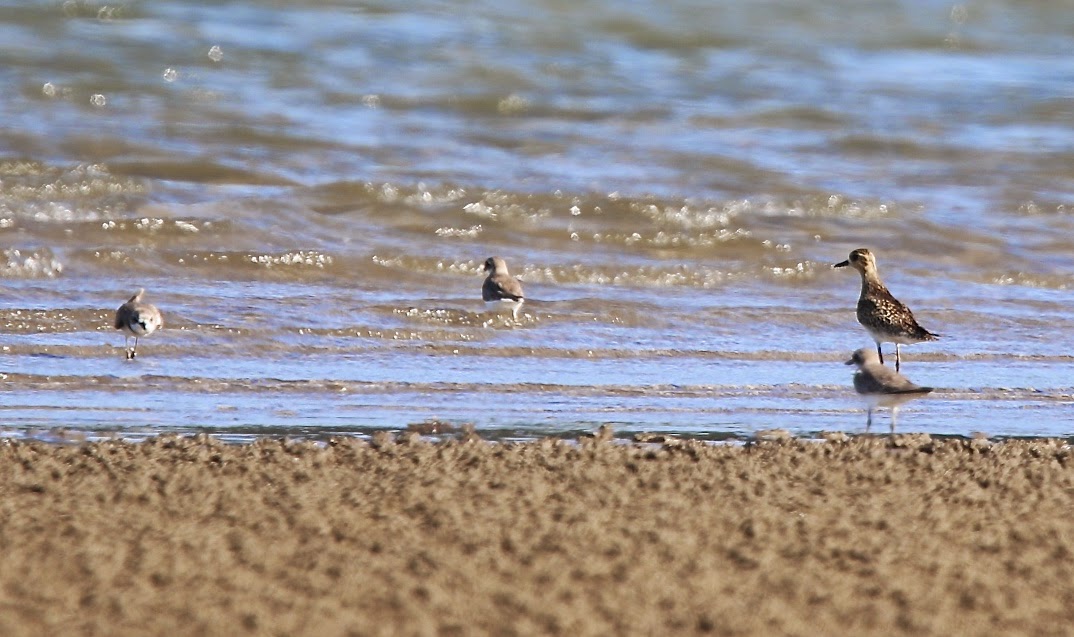 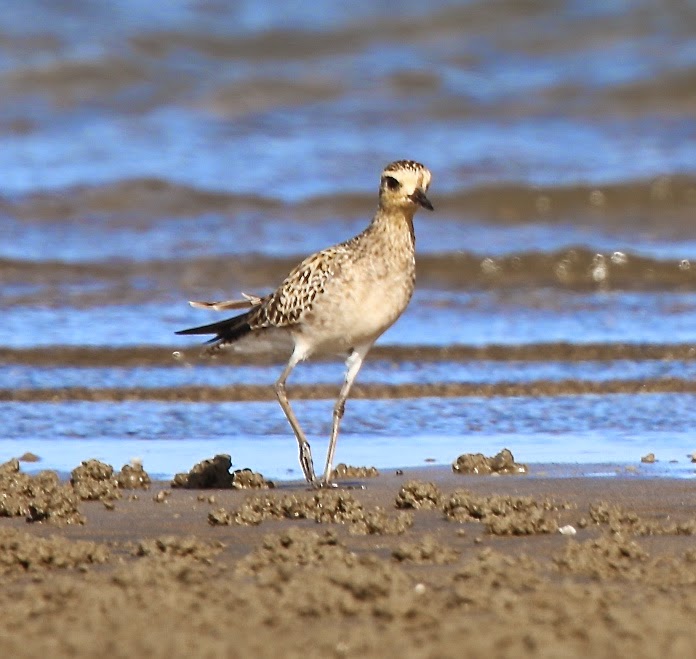 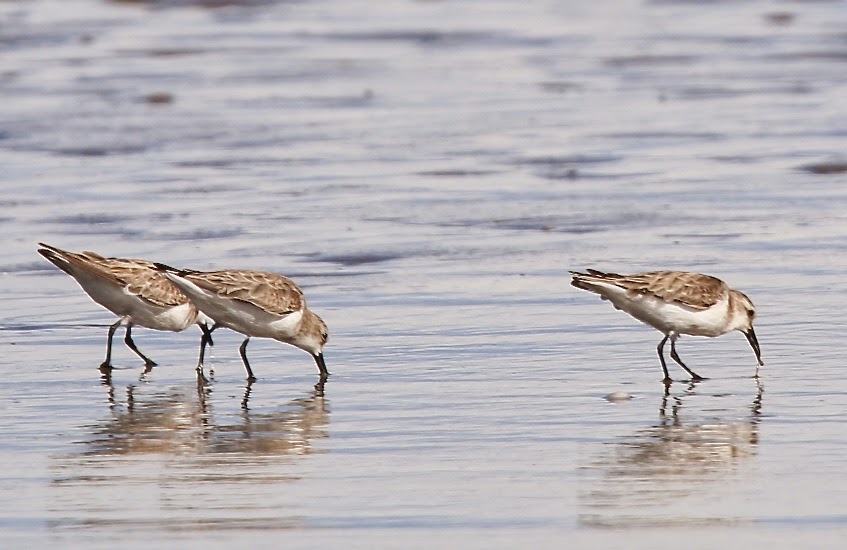 Out on the mudflats I found a small group, about ten, rednecked stints. I hadn't seen them at Coquette Point for six weeks. 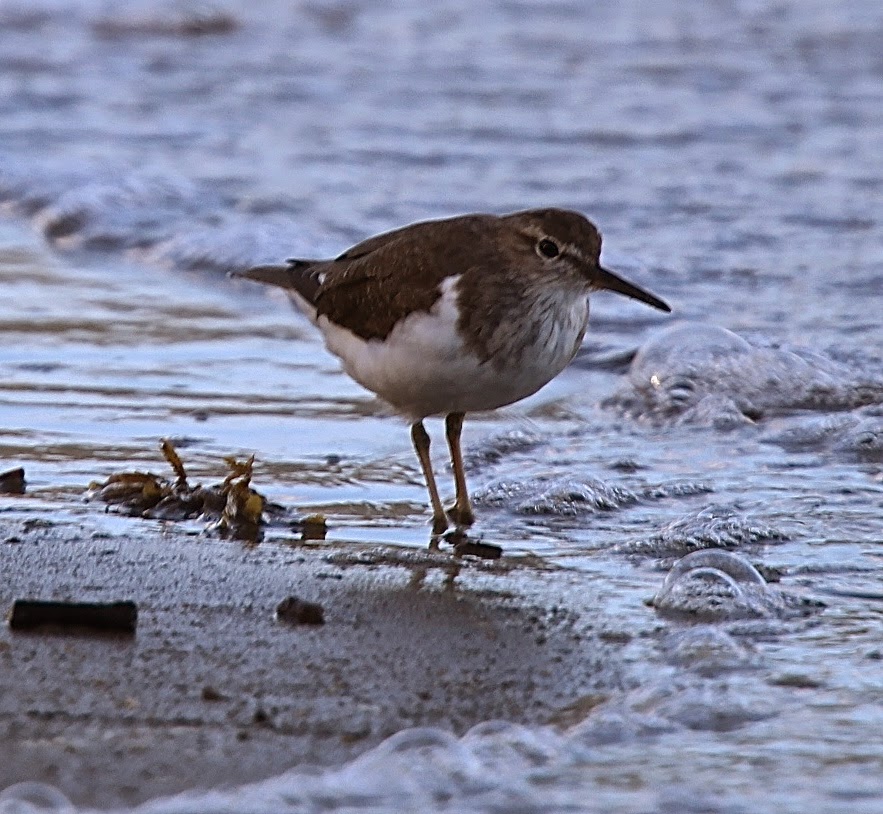 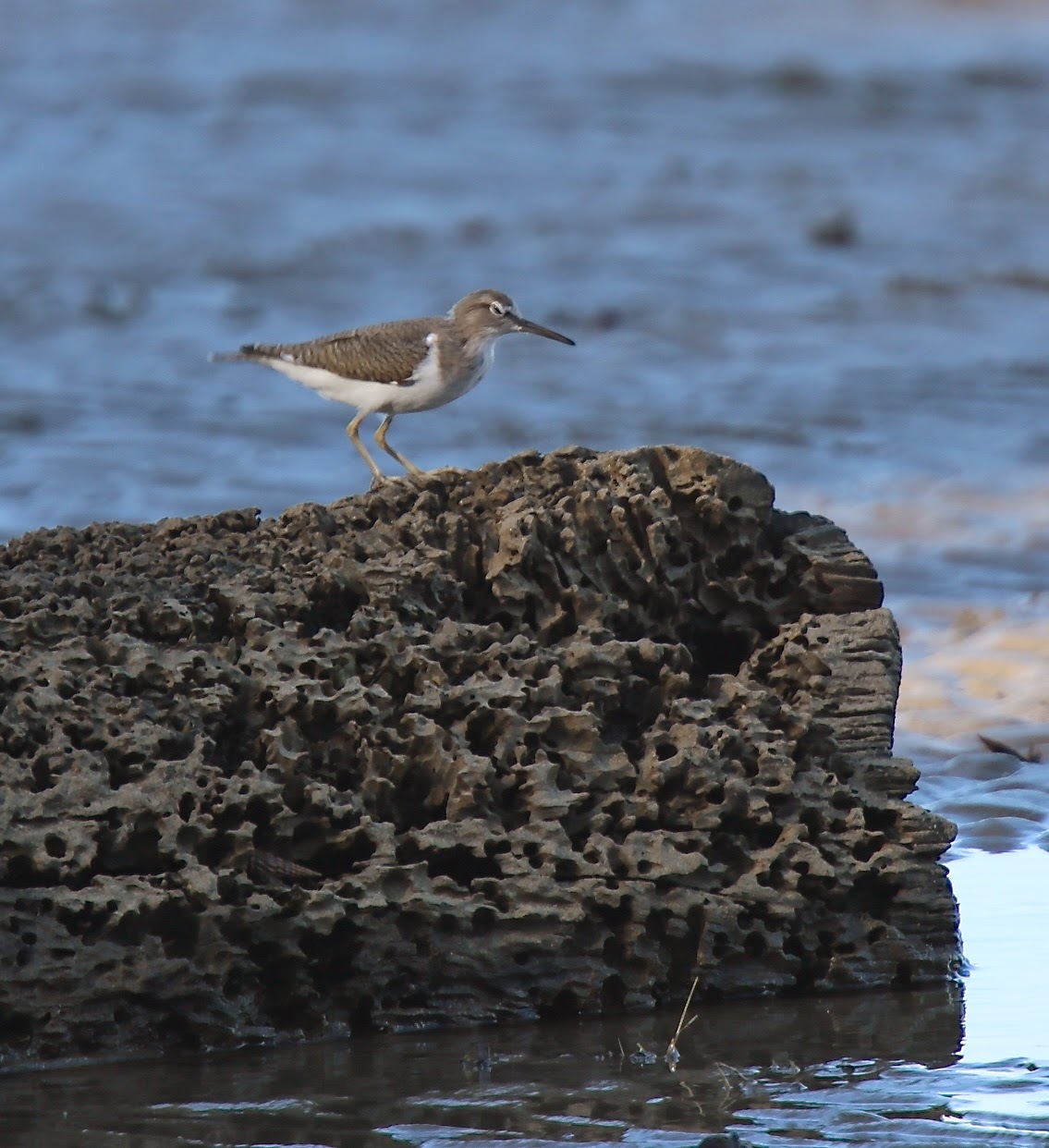 As I turned to come back, 5.30pm, the tide was racing in
and I found yet more common sandpipers fishing in the incoming water.

I noticed many little birds making their way up to the high-water mark where beach debris lined the mark. 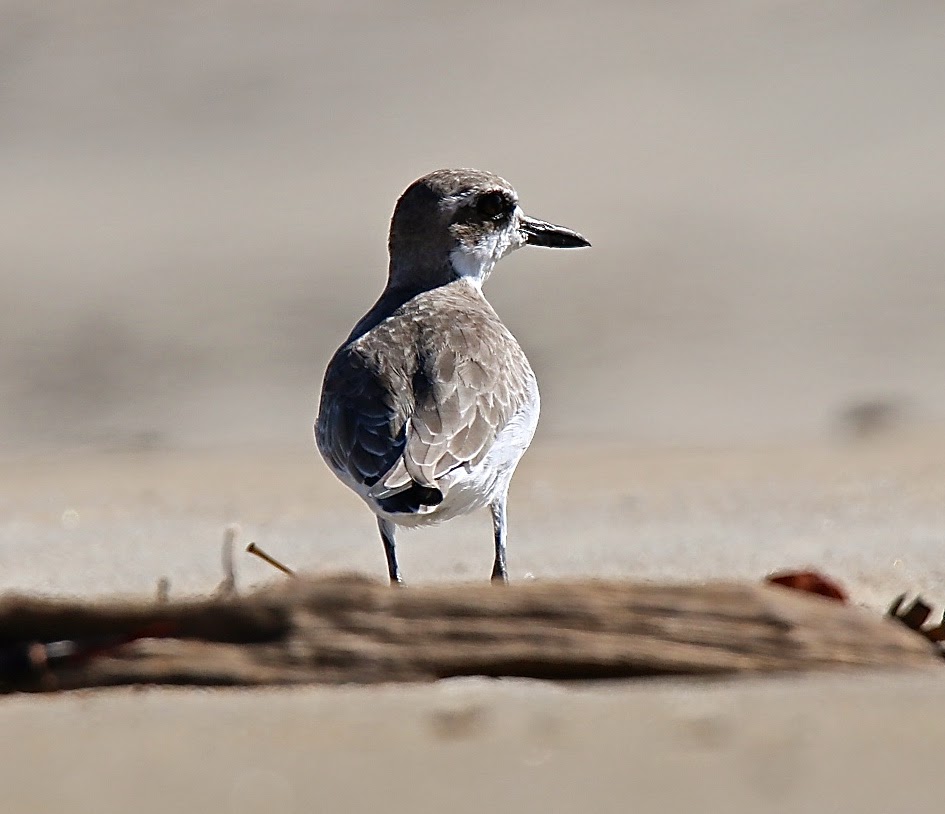 While all the birds I photographed still appeared to be out fishing on the incoming tide, another group had gathered on the high-water mark. I saw lesser and greater sand plovers, red-necked stints and common sandpipers all grouped together.

I have only seen one pied imperial pigeon feeding in the damson plums over the last two weeks, however, Ruth L has watched three traveling over the Johnstone River Valley in the morning and another two feeding on the trees in the Coquette Point Wetlands. It appears most of the PIP's have left for their northern migration journey.