Although the sky is full of smoke no fires are burning at Coquette Point. However, landholders in the district are burning. Starting a fire this late in the season will inevitably be difficult to stop and one wonders at the wisdom of granting fire permits in such hot dry weather.

September is the start of the cassowary and pied imperial breeding season and it is heartbreaking to know these birds will be 'burnt out' of large areas of the Cassowary Coast, again. 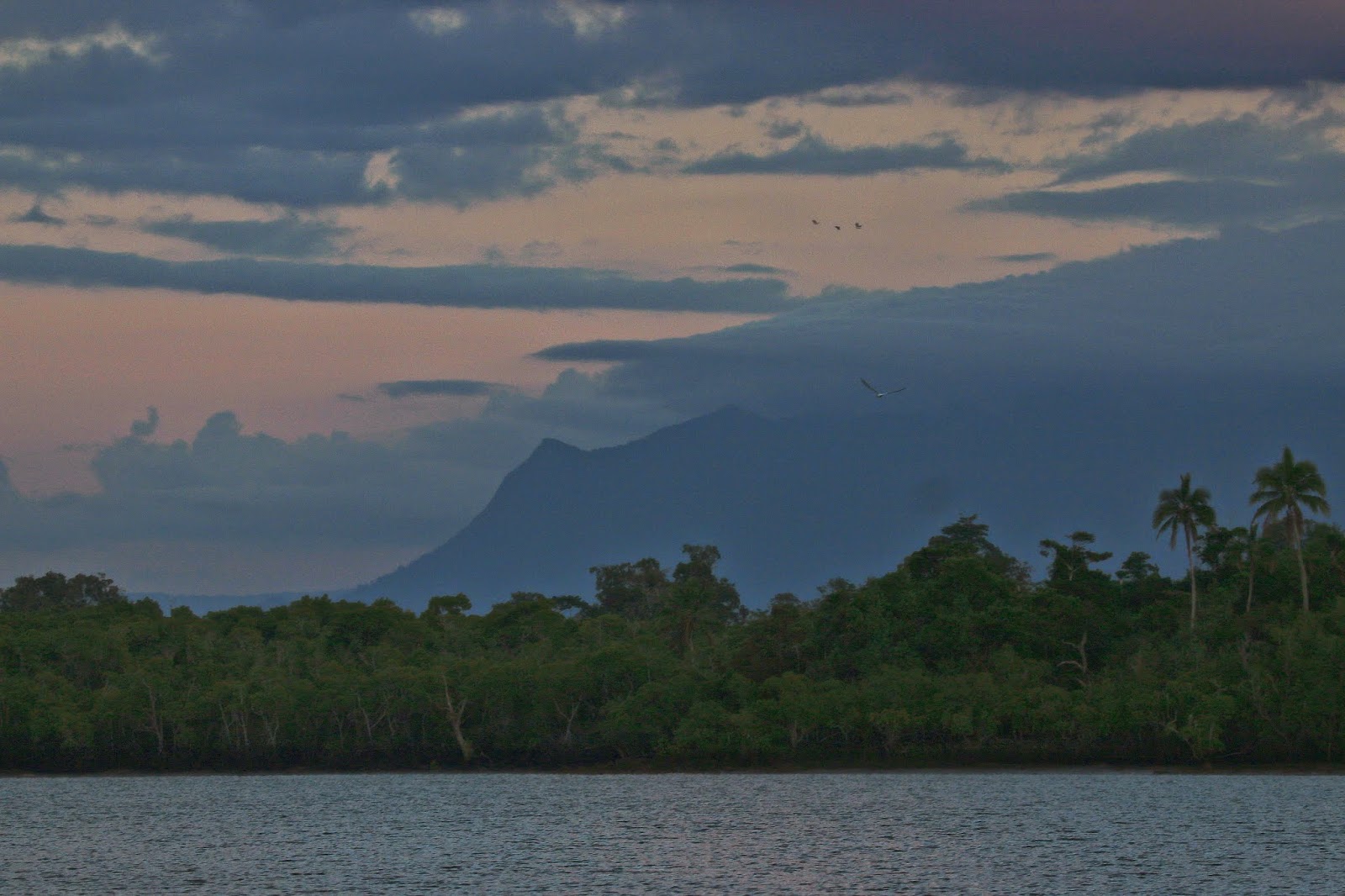 The smoky atmosphere turned the sky pink in the first rays of pre-dawn. It is at this time that white-breasted sea eagle patrols the Johnstone River and the pied imperial pigeons journey from the swamps and offshore islands to the coastal rainforest to feed. 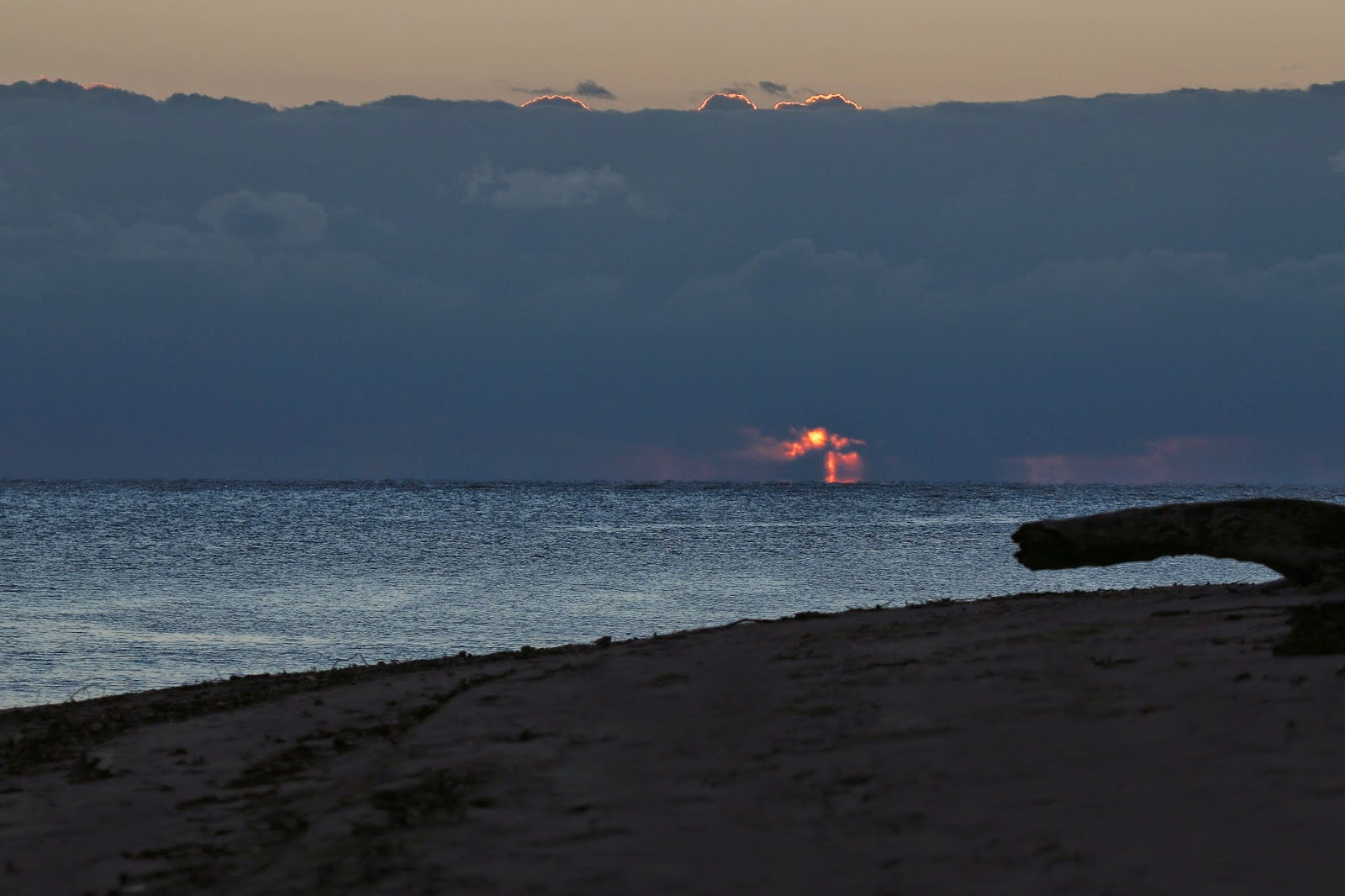 The mornings are delightfully cool at sunrise and it is always the very best time for an early morning walk on the beach. Unfortunately the light for photography is not good and on Tuesday morning as I walked alongside the river I saw a large dark shape in the water moving very slowly. Occasionally there was a bubble of disturbed fingerlings . At first I thought it was a turtle and at no time did I feel or think it was menacing. I took several photos but could not identify the shape. I asked Russell Constable to look at the photos and he ran an analysis on his computer and his result is that it is most likely a Queensland grouper.  I have not seen the fish since in spite of searching every morning in the same area.

Giant Queensland groupers were once common in the Johnstone River and one particular fish became famous with locals and tourists. The Wallace Fish Shop and the nearby Fish Board, for years, fed the gropers of the Johnstone, which were very tame, and one grouper was estimated to be over 100 years old. People would line up to see and enjoy the spectacle of feeding these gentle giants. Then one day some twisted person placed set lines in the river and caught and killed the groupers, their bloated heads were later found floating in Nind's Creek.

Ulysses of Beaver Cay was another tame giant grouper which was made famous by Perry Harvey. People came from all around the world to swim with Perry and Ulysses.

Brenda Harvey told me, "Perry never tired of explaining to all of his passengers, on his tourist boat the MV 'Friendship', the gift of the reef and his efforts to save it." Brenda said, "Perry did more to foster awareness of the reef and its problems than any newspaper article or television programme could ever do."

Then one day Ulysses the grouper was found dead with a bullet through him. It was from that time when tourism started to decline in the Cassowary Coast Region; perhaps it was groper karma.  Time will show if our fortunes are linked to this new grouper's arrival and survival.

Today Russell Constable saw what appeared to be a large groper hunting in the shallows on the bank opposite the Innisfail wharf area. Russell believed the groper was hunting mud crabs in the shallows. 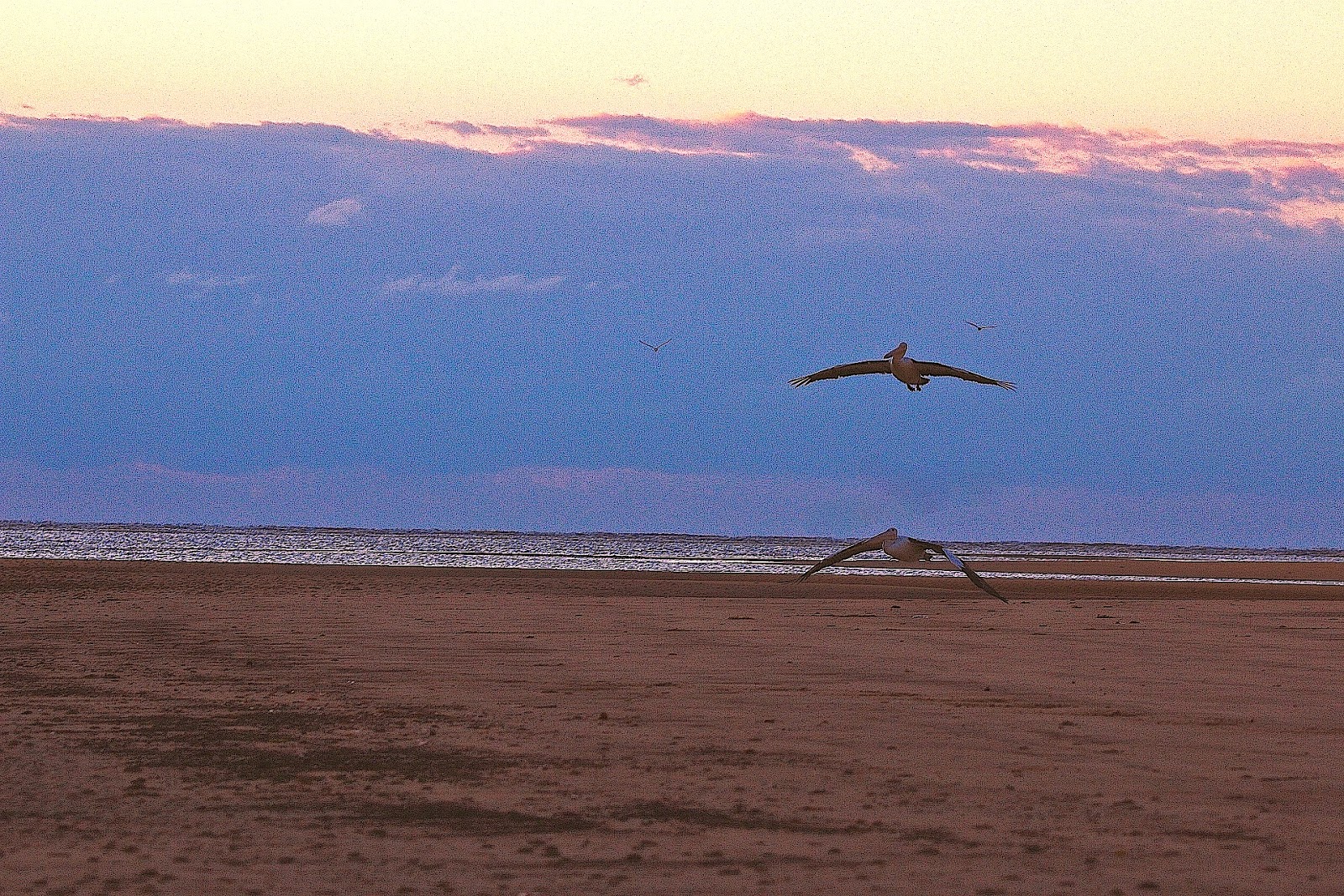 As the sun rose in the sky two of the six pelicans which have made the Johnstone River home took to the sky and flew up the river. 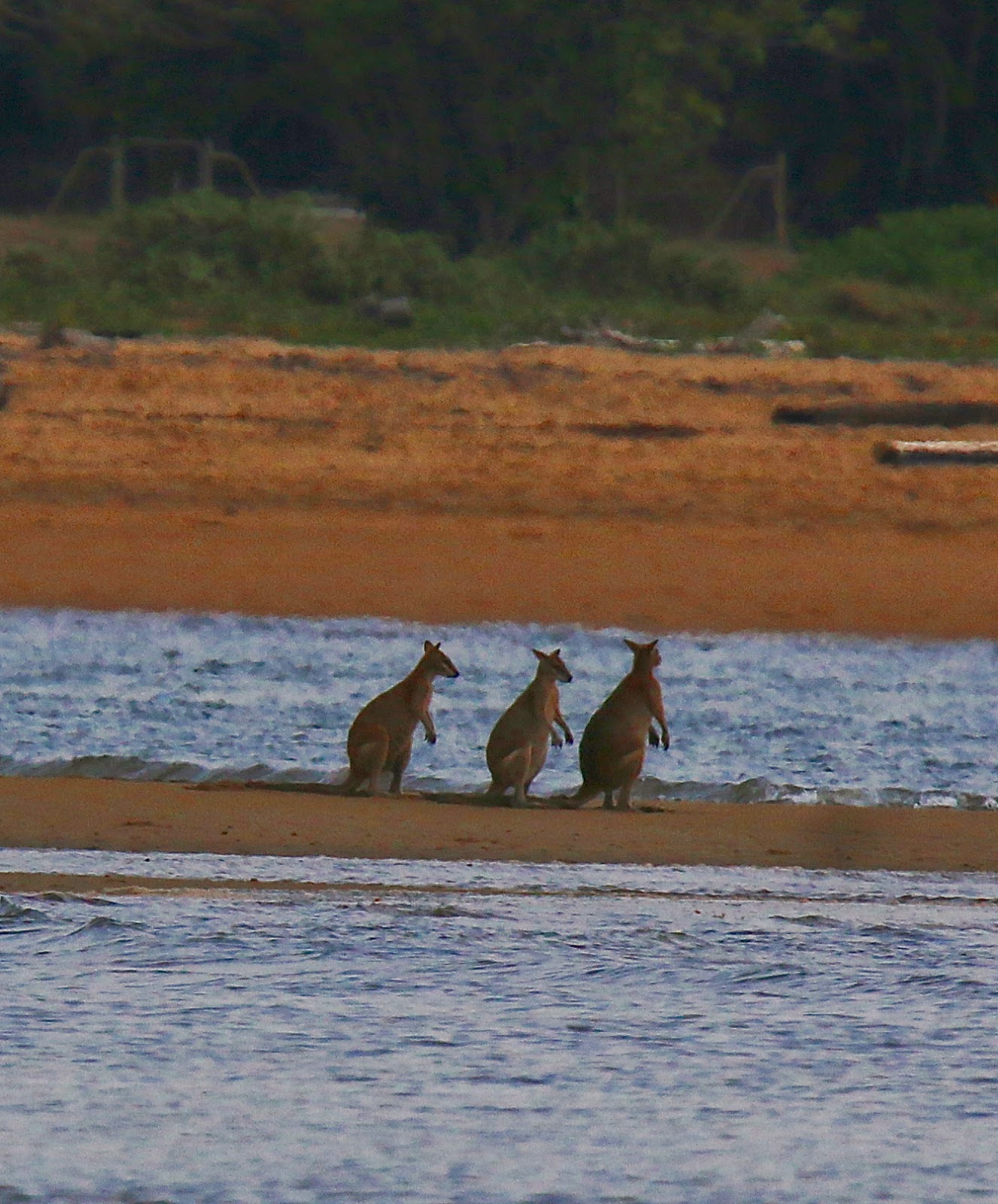 Far out on a sand bar three agile wallabies were standing looking across to the other side of the river. Then perhaps thinking it was not a good idea to swim the river, they hopped back into the mangroves. 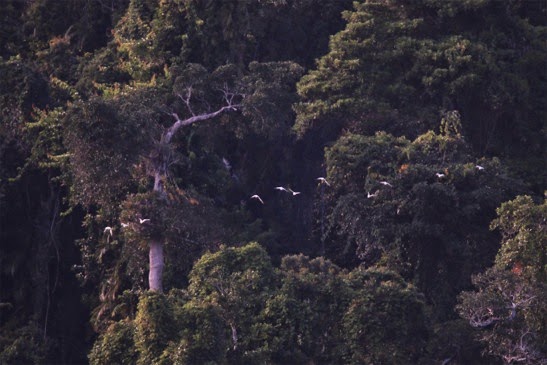 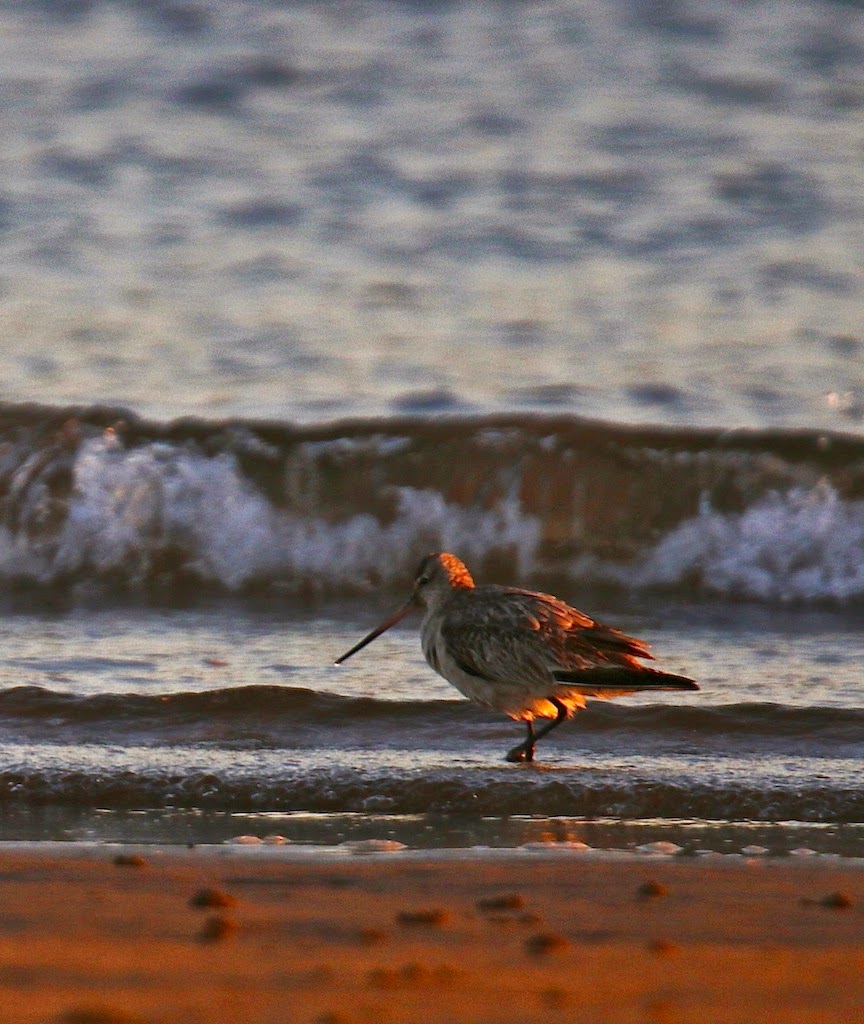 As the sun's rays coloured the dark green rainforest of the Moresby Range National Park I watched eleven Pied Imperial pigeons arise from the Coquette Point wetlands and move amongst the rainforest trees to feed. 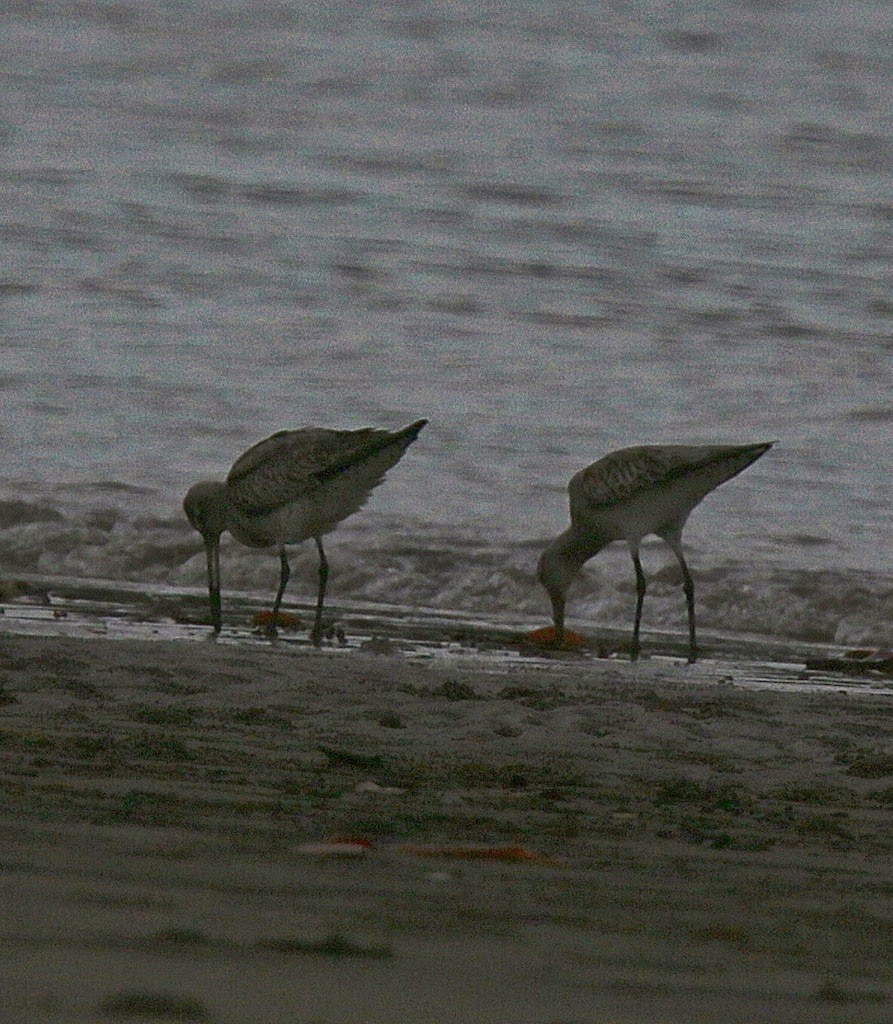 On the beach the sun's rays glowed on a bar-tailed godwit as it fed in the surf. Two more were feeding closer in on the shore line. This is the first returns for these birds to Coquette Point for 2014.

Around ten Pacific golden plovers were feeding further out. Their numbers were down on last week's count.

Grey tailed tattlers, around six, were feeding solitarily over a wide area of the beach, there could have been more. There was no indication of any aggression as seen last week, but the birds were well apart. Still no sign of the flagged grey-tailed tattler I saw a month ago so he has obviously moved on.

I did not find any soldier crabs emerging in the morning low tide. Unfortunately tide and time did not offer me an opportunity to explore the late afternoon tides this week.

Out on the hazy horizon I could see a line of bulk carriers, I counted five. There appears to be an endless line of these ships constantly moving along the coastline.

Whimbrel searched for breakfast on the sandbar unaware of the ships passing. 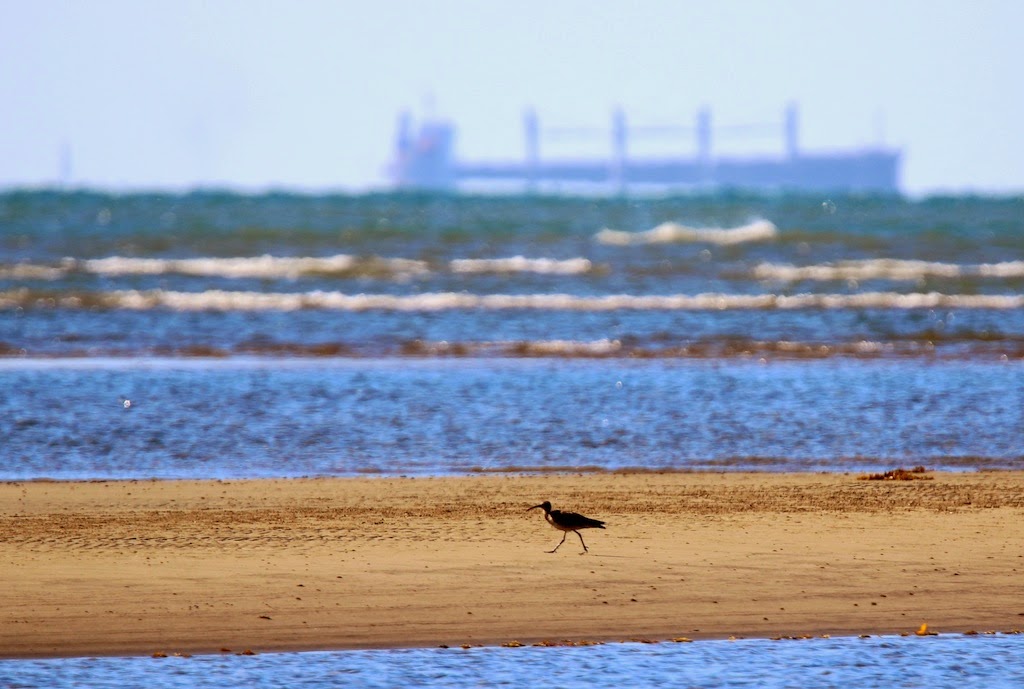 Hundreds of small waders were busy feeding on the sand and mud-flats at Coquette Point. 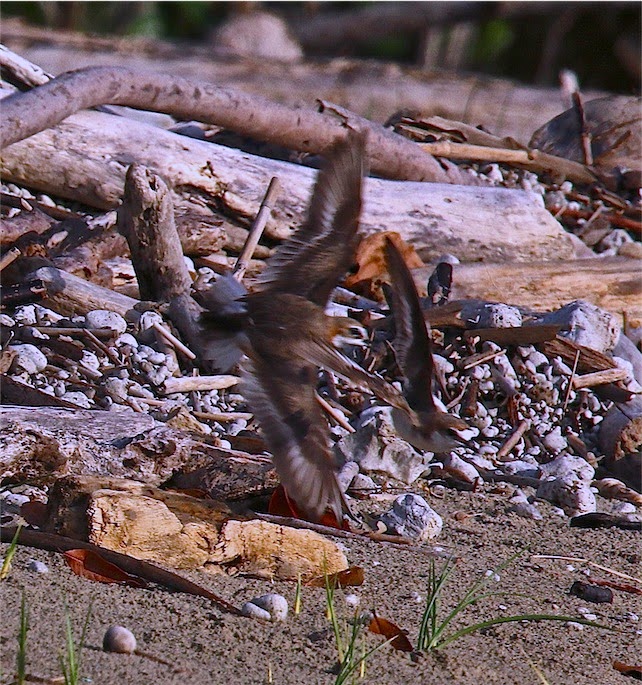 The red-capped plover is a small bird of 14 cm which inhabits coastal estuaries and wetlands. It feeds on insects, molluscs, crustaceans and worms found on beaches and mudflats. The red-capped plover is present all year and nests generally in spring. The nest is a small depression and contains a clutch of two yellowish-brown eggs. The incubation period is 30 days and incubation is mainly done by females. Prior to mating males can become aggressive and will engage in lengthy displays and fights for the dominance of females. 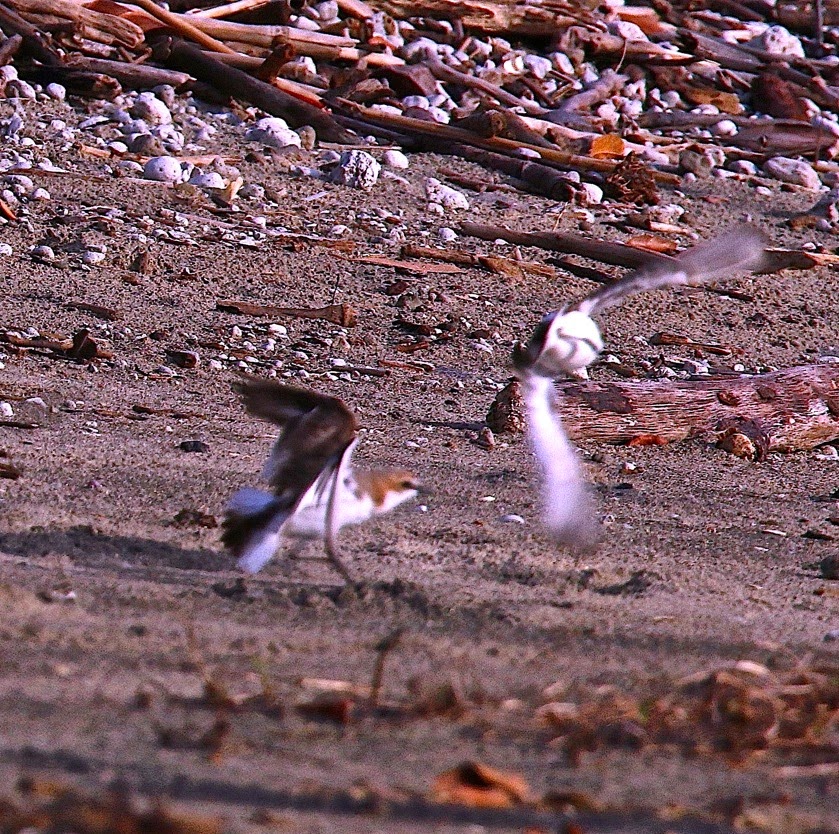 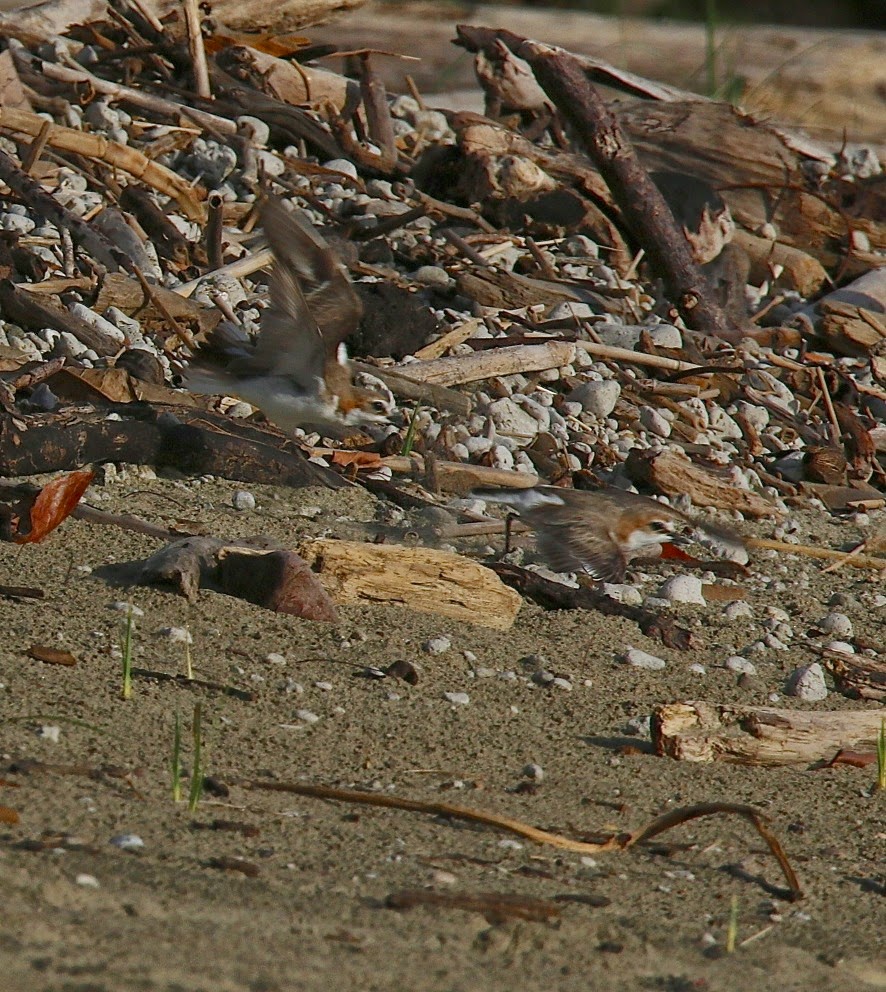 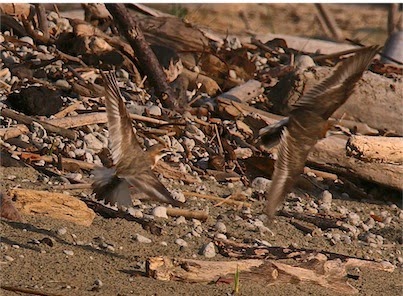 It was walking out on the sand flats when I noticed a lot of fluttering and heard high pitched tweets coming from the dunes above the high water mark on the beach.

As I drew closer I found two red-capped plovers engaged in an aggressive fight. They were so absorbed with each other they ignored me as I drew closer to photograph them. 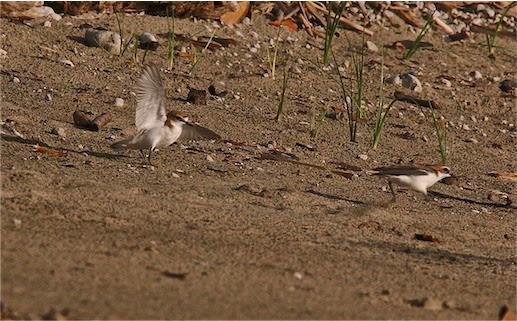 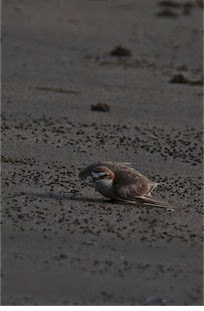 One of the red-capped plovers ran down to the beach where I was standing and he fell down onto the sand. I thought he was injured in the fight and as I walked closer he started to walk on his wings towards me. Then with renewed energy he flew back to his opponent and continued the fight.

I left them to it and when I returned a half hour later I saw one of the males with what looked like a female. They walked up behind the sand dune where I left them in peace and with a bit of luck they will be able to nest safely. 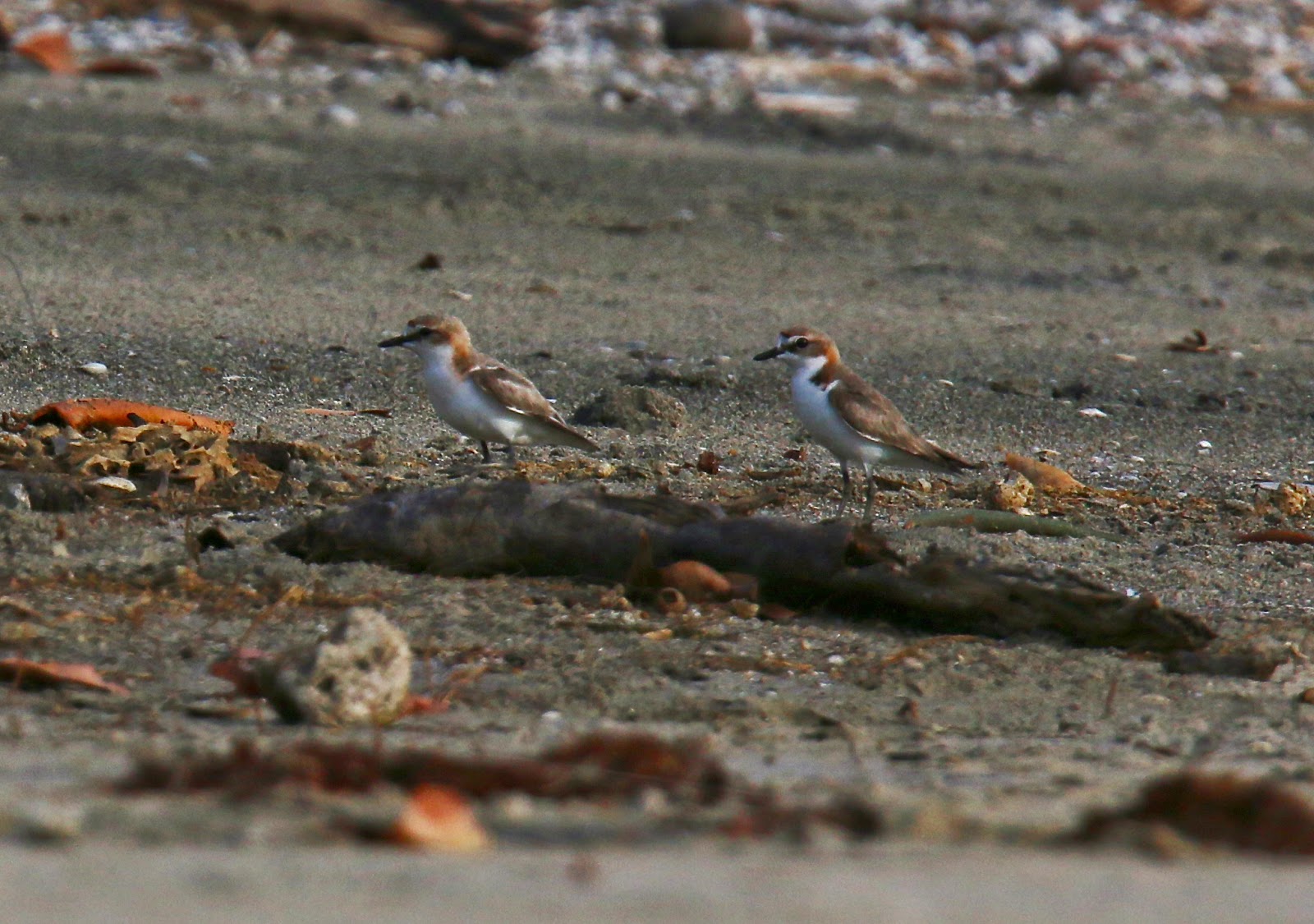 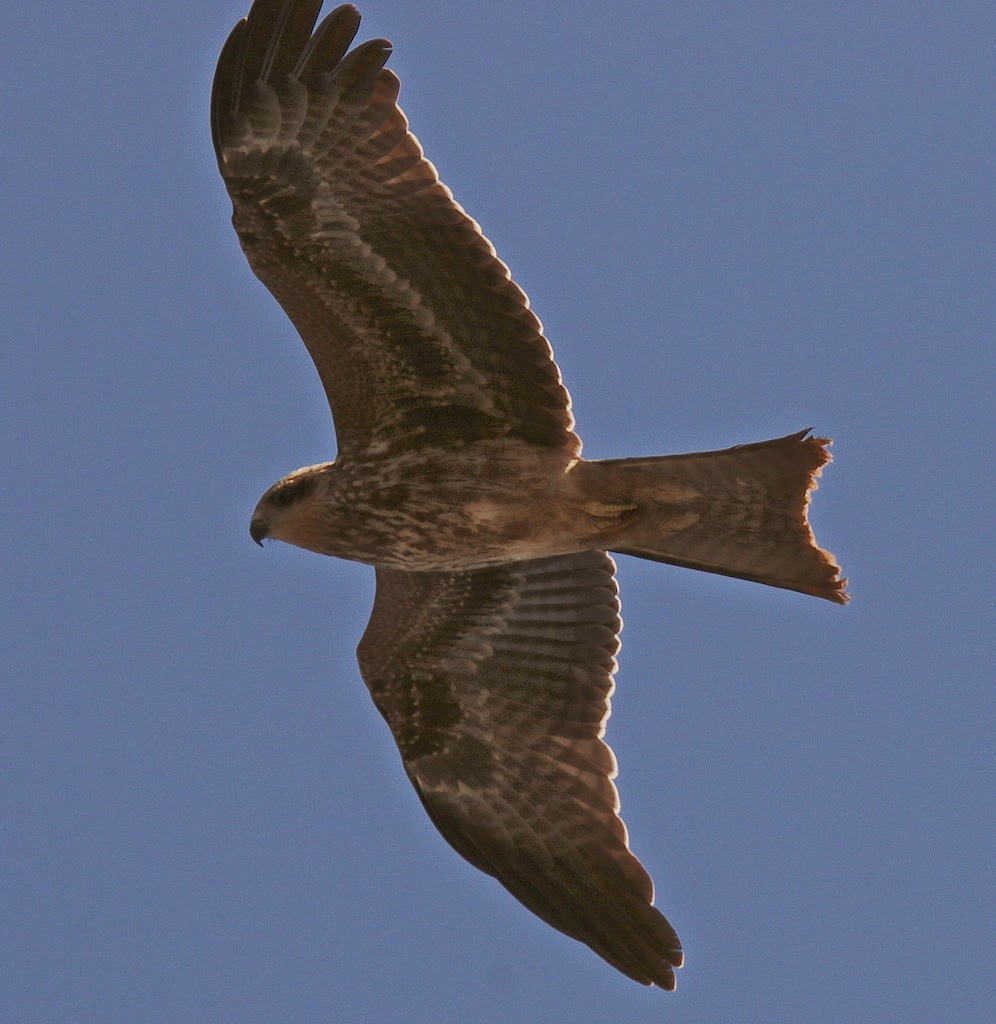 As I walked back along the beach twelve black kites suddenly appeared and circled above me. Several were hovering over the beach and some of the kites landed on the beach.

I had never seen black kites on the beach before and wondered what they were doing.

It didn't take long to find out. While I had been around on the front beach it appeared someone had emptied a net and left eleven catfish on the beach.

How amazing is the eyesight of the black kites and their sense of smell, to be able to hone in so quickly, on a few dead fish. As I watched the bird's circling I saw children across at the Coconuts playing on the beach with a dog in the water. If the kites could find the dead fish so quickly so could a crocodile. No doubt the idiot who left the fish on the beach would be the first to call 'rogue crocodile' if one was sighted. Salt water crocodiles are scavengers and will be attracted to feed where there is discarded fish guts and bait. Late October is the start of the nesting season and crocodiles can be aggressive at this time. It is our bad behaviour that brings us into conflict with these creatures. 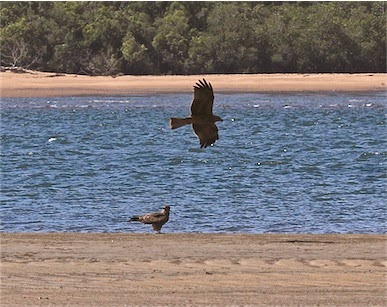 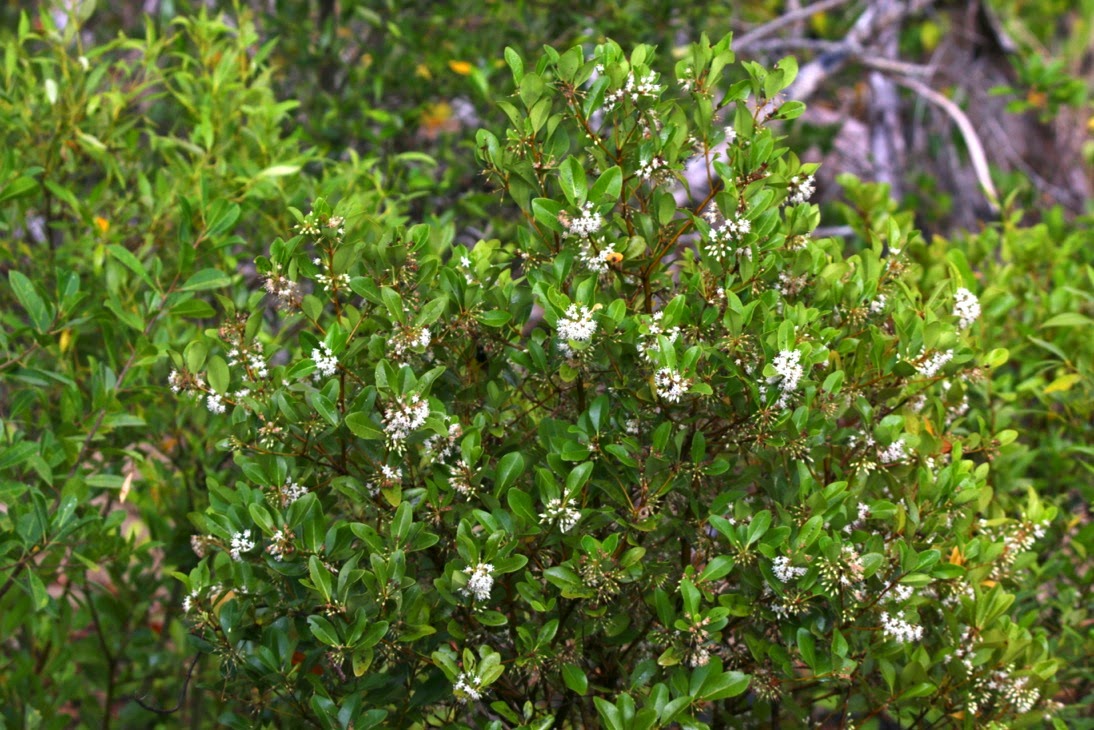 I buried the fish and washed the smell from my hands.  I soon forgot about the smell of the fish as I returned on the walking track through the mangroves the forest was alive with the buzzing of bees and insects as they feasted on the sweet perfumed blossoms of the little river mangrove Aegiceras corniculatum. The flowers of this mangrove play a significant part in the production of honey.  Aboriginal people used the bark of this mangrove to produce a fish poison. 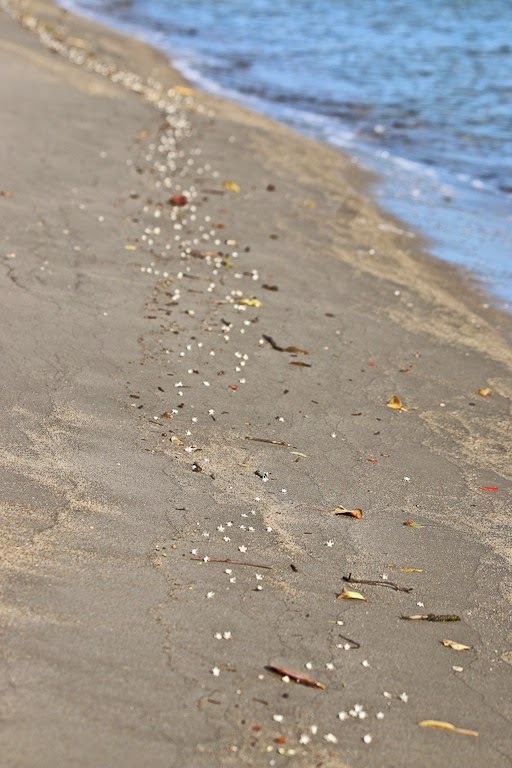 Around the breather roots of the little river mangrove the spent flowers were falling covering the mangrove swamp with a white flower-confetti. When the tide came in it collected the flowers and as it ebbed it deposited the flowers in a line along the beach. 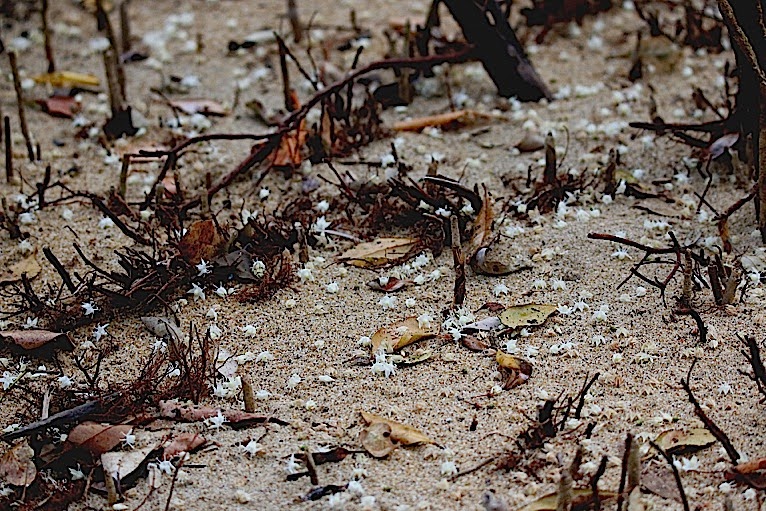 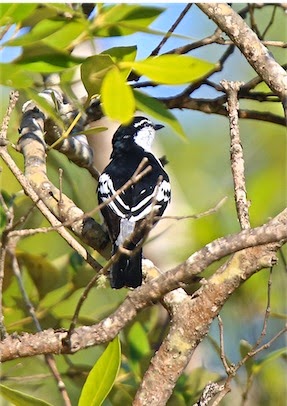 In the foliage of the mangroves varied triller was singing with ever increasing excitement as he feasted on the insects attracted to the mangrove flowers.

In the casuarinas close by a flock of yellow-eyed cuckoo shrikes were gobbling up the insects and singing a song of thanks to the new day and the feast of insects. 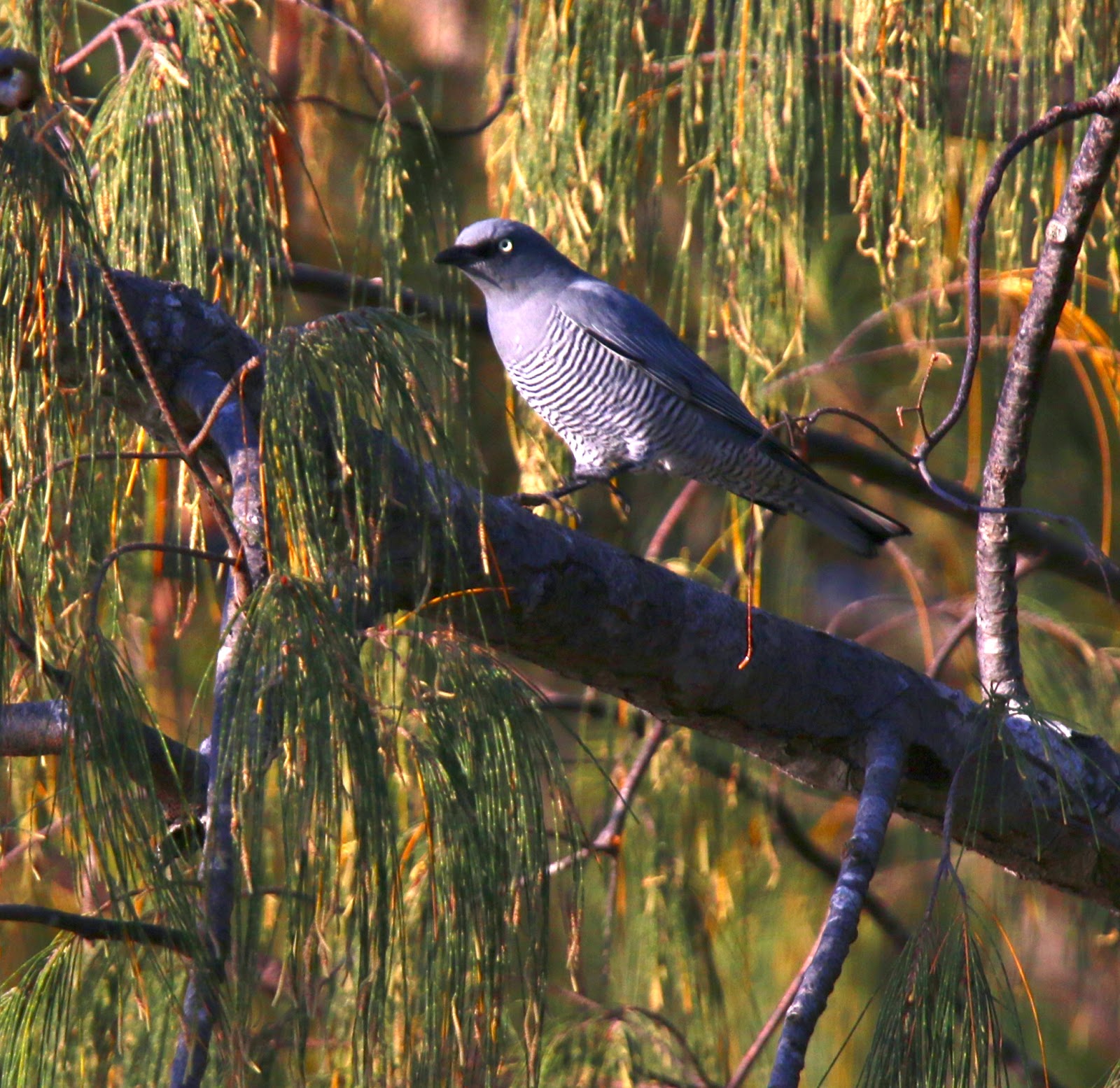 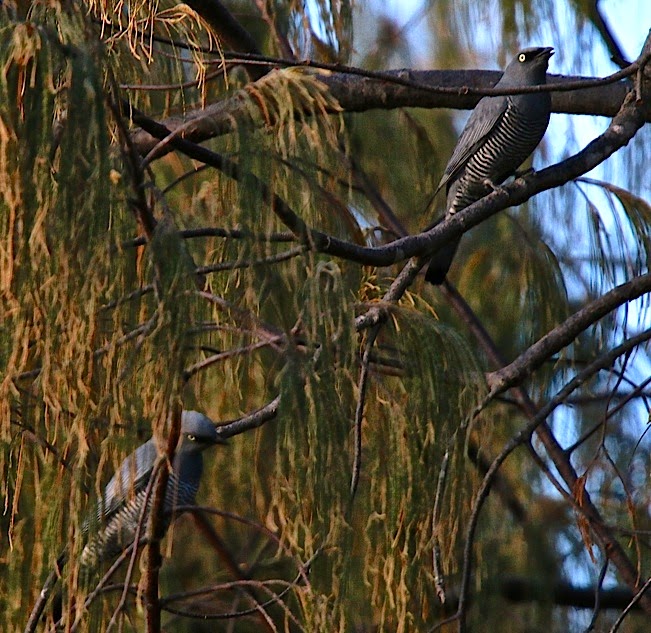 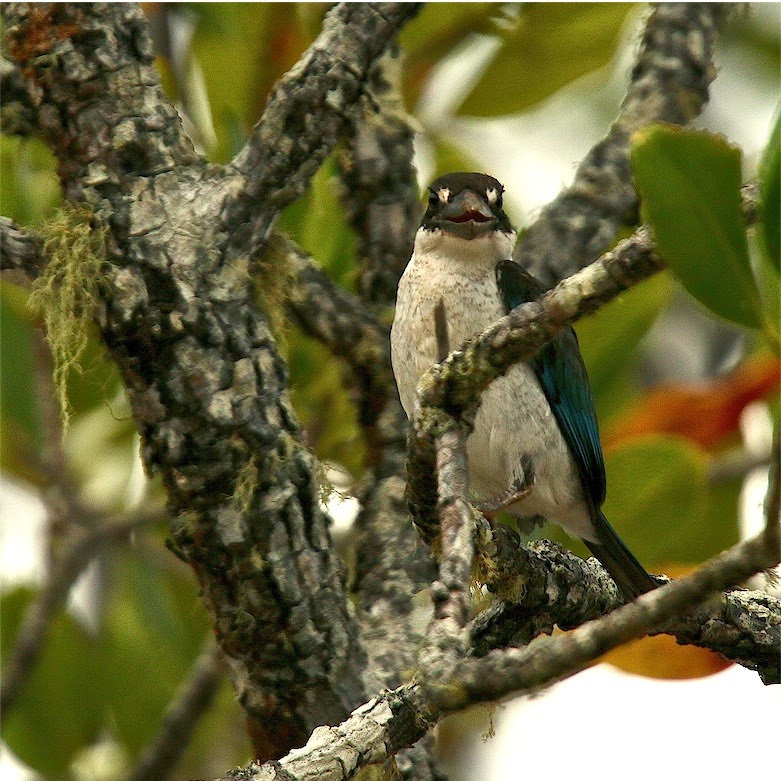 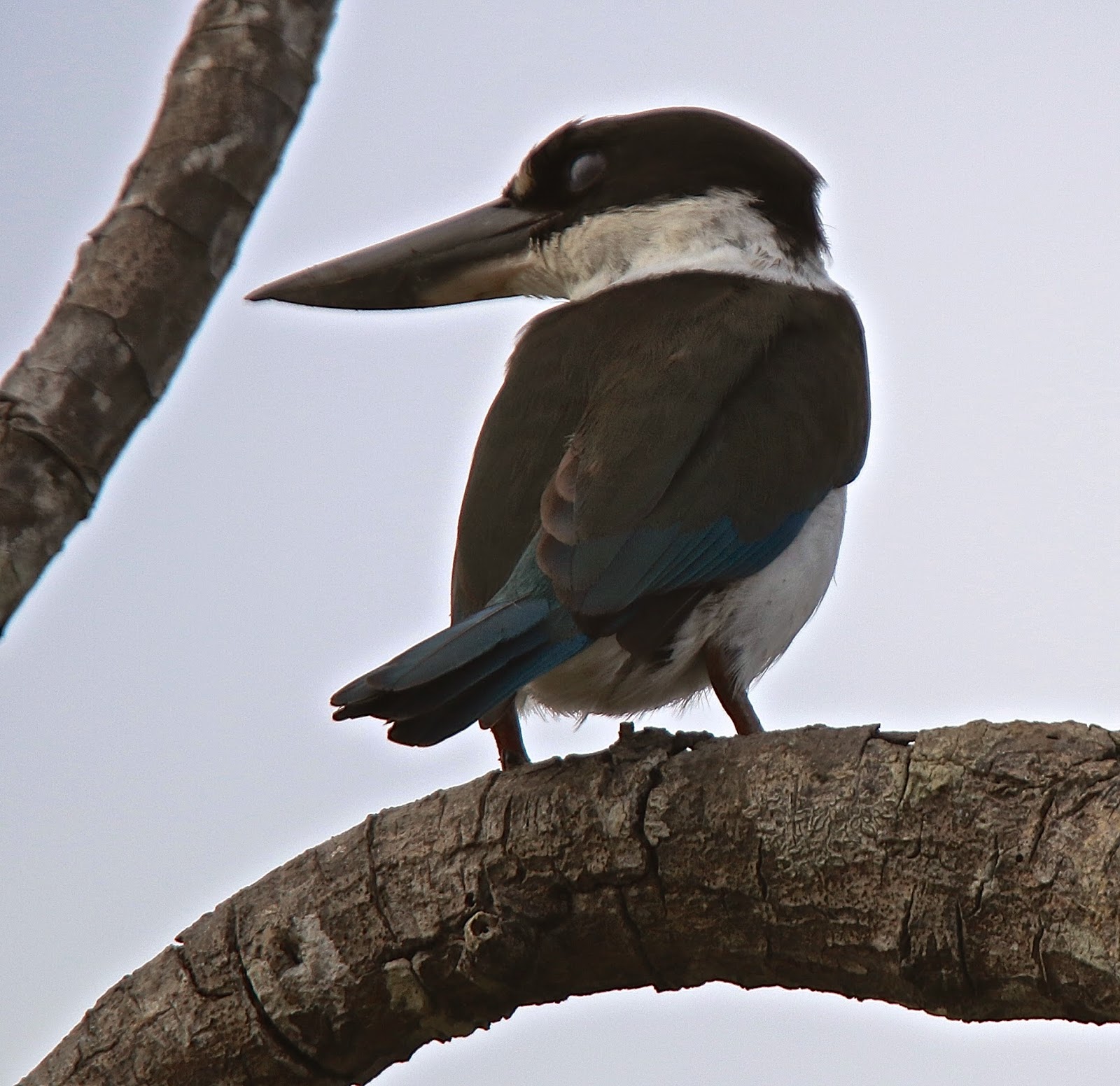 It was all too much for cranky forest kingfisher as he emerged from building his termite nest, his normally white feathers dirty from his excavation work. He soon forgot his bad temper as he shook himself off and looked around at the beautiful day and saw a meal close by.


Cousin kookaburra thought it was time to break into song and the mangrove forest resounded with the laughter of a dozen kookaburras.

Mangrove forests are both beautiful and mysterious and they are home to a wide range of special creatures. 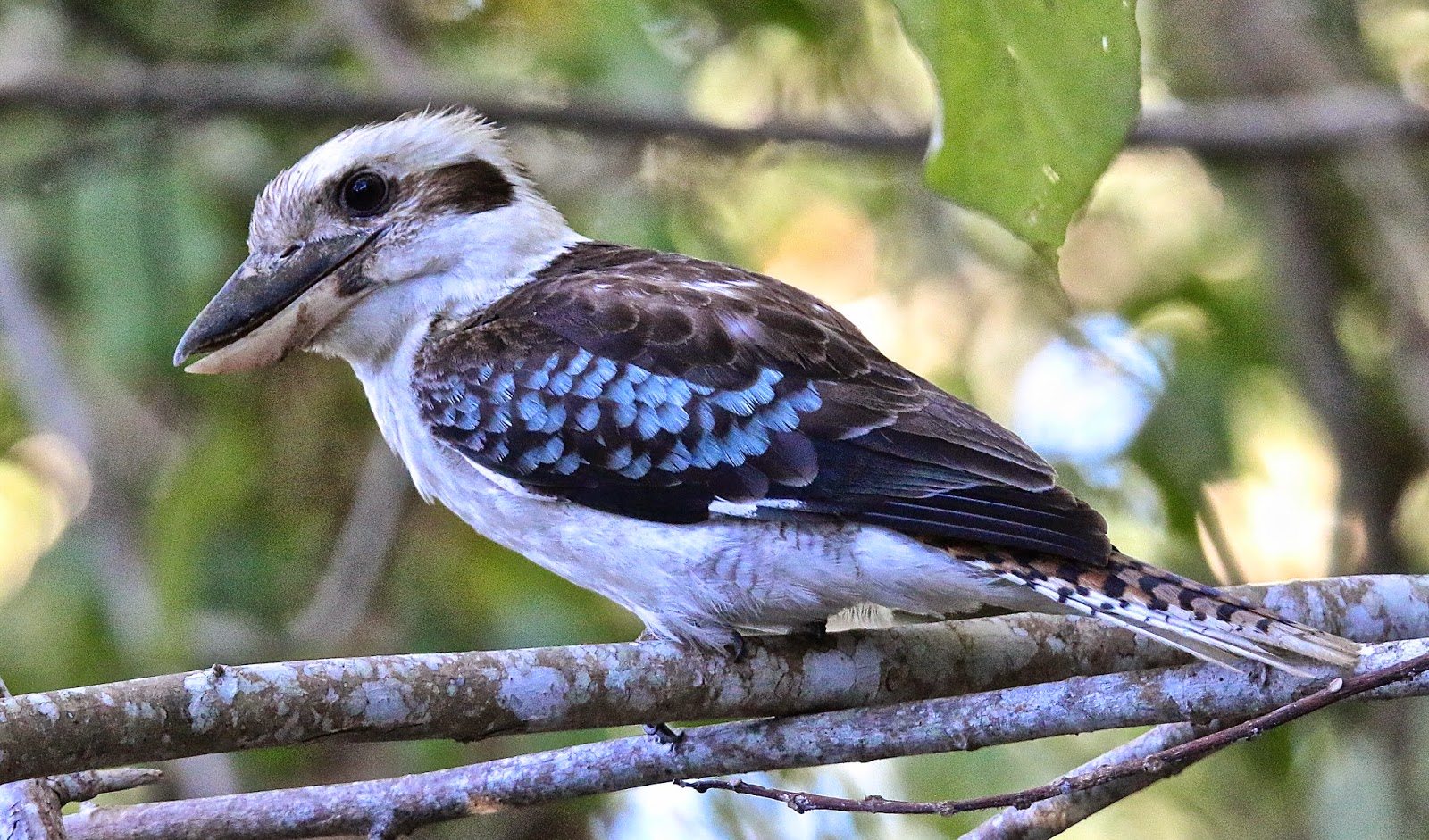 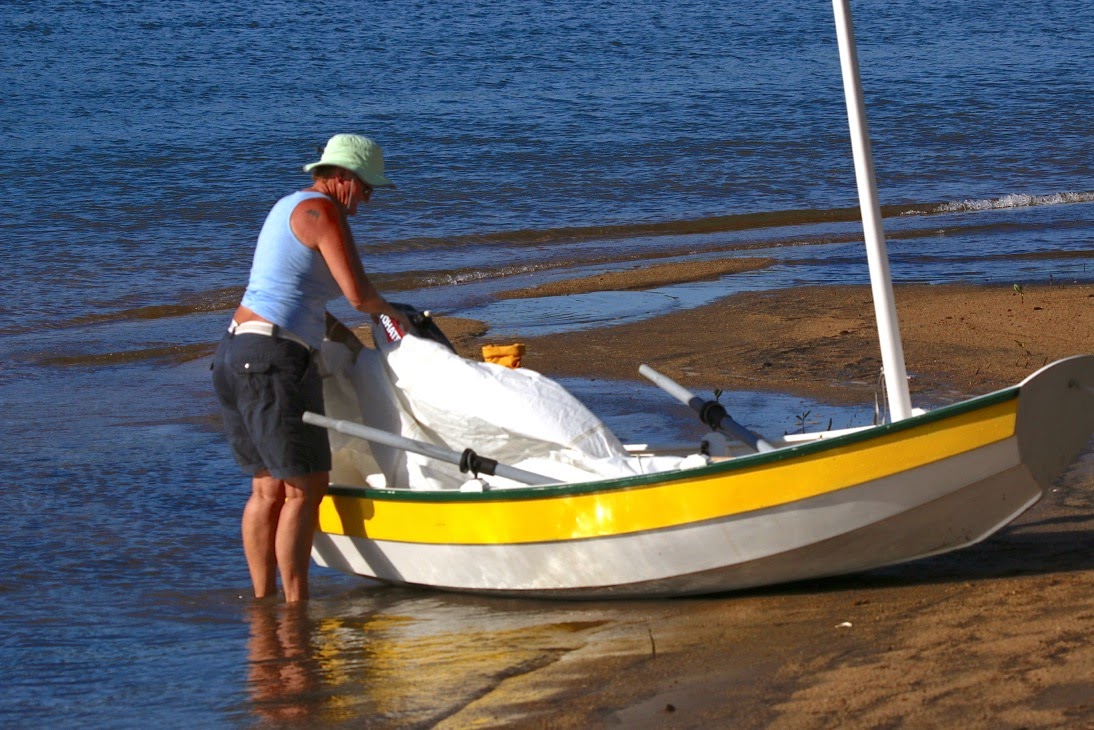 One special creature sailed in through the mangroves this week, my good friend Bernadette. Bern sailed her dingy, 'Pookie' from Mourilyan Harbour on a light breeze to arrive in the Johnstone on a making tide with a good dose of sunburn. Bern has her dingy all set up for a quick getaway when she can.


Several cases of Ciguatera fish poisoning, CFP, have occurred in Innisfail recently. As a remote area nurse Bern is all to familiar with ciguatera fish poisoning and I myself have had three run-ins with the toxin and know never to eat large fish, particularly large mackerel as they are more often affected with the toxin at this time of the year. I am also aware that the toxin remains in my system and the next time I eat affected fish there might be a very poor outcome.

A friend rang me this week he had been out to the reef and brought home a good catch which he kindly gave to other members of his family. Unfortunately the fish, mackerel, were full of ciguatera and the family members became very ill. Ciguatera poisoning can be life threatening particularly if you have some underlining illness, like a heart condition or diabetes.

Although the dinoflagellate which produce the ciguatera toxin is a naturally occurring marine organism and it has been observed by the peoples of the Pacific for hundreds of years, it is thought that the organism is now more prevalent, certainly the cases of CFP reported have dramatically increased.

The only drug proven to be effective in the treatment of ciguatera poisoning is the diuretic drug mannitol.

The toxin accumulates in the fatty tissues of anything consuming affected fish including fish eating fish and people eating fish.  Ciguatera toxin cannot be tasted or smelt however the symptoms become evident within 24 hours after eating an affected fish.

Catfish like the ones discarded on the beach at Coquette Point are good eating and are not affected by ciguatera toxin.

Enjoy your next fish meal,