The sugarcane harvest is well underway and the silvery flower heads covering the paddocks are falling to the harvester, exposing the rich red volcanic soils of the Johnstone River Valley. 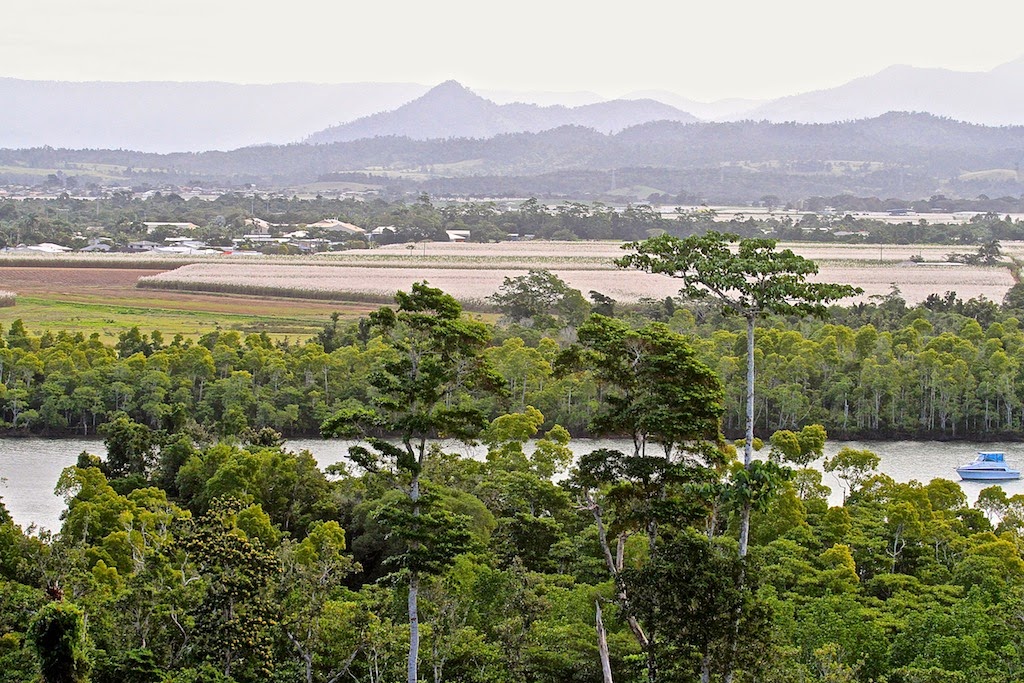 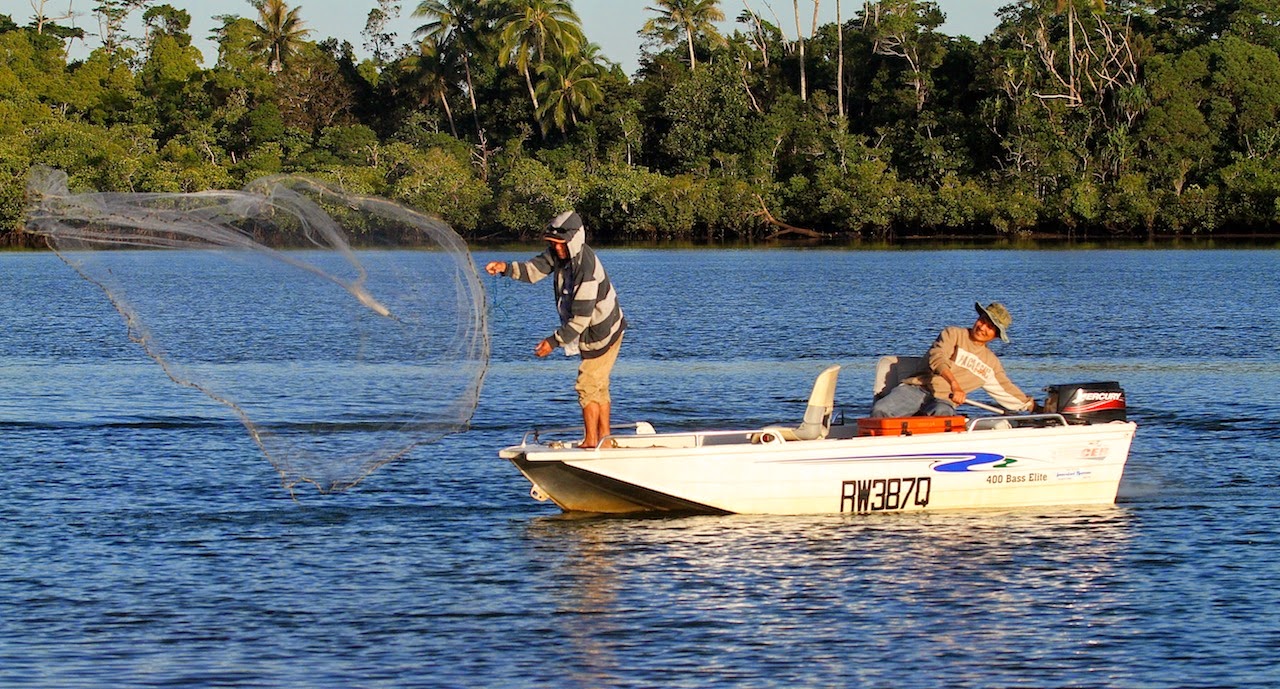 As the morning-sun lit up the Johnstone River I watched two fisherman turn their boat and throw their cast-net to capture a school of bait fish playing on the river's surface. 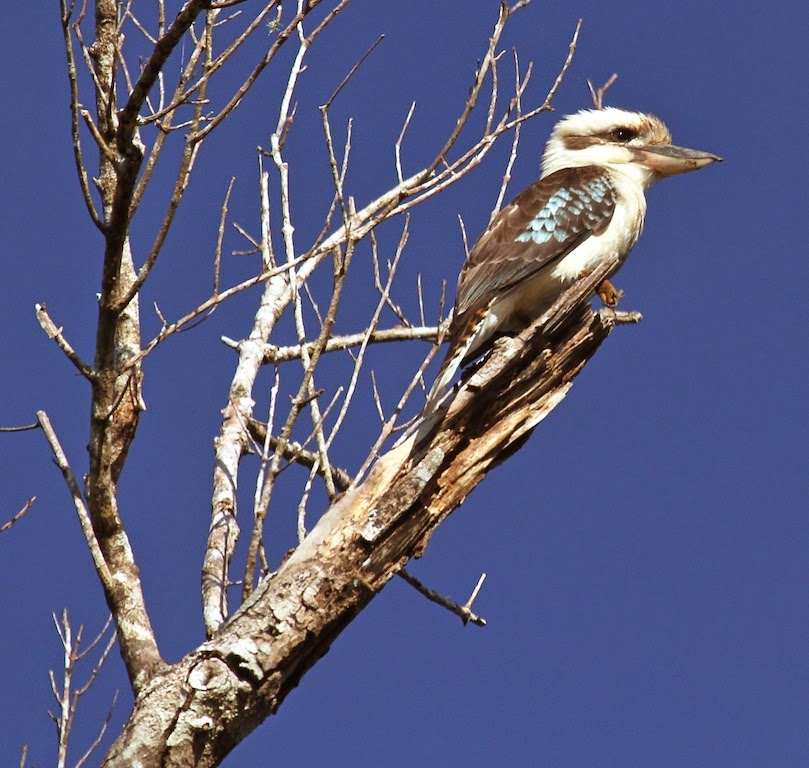 From an old dead tree young kookaburra started a morning wake up call.

Not to be outdone, yellow oriole moved out of the forest canopy and in the warm morning sun, called out in bubbly excitement, it is time to start the day's business. 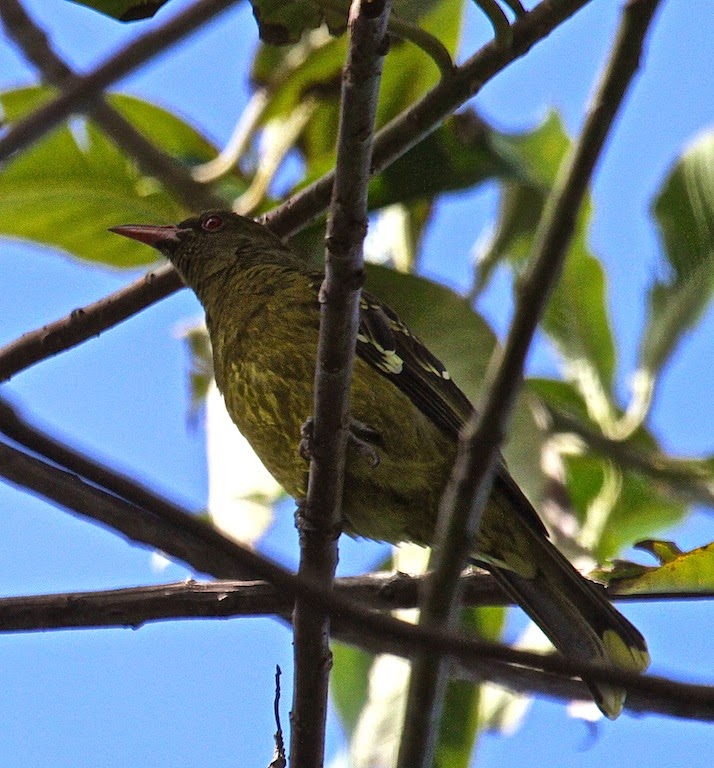 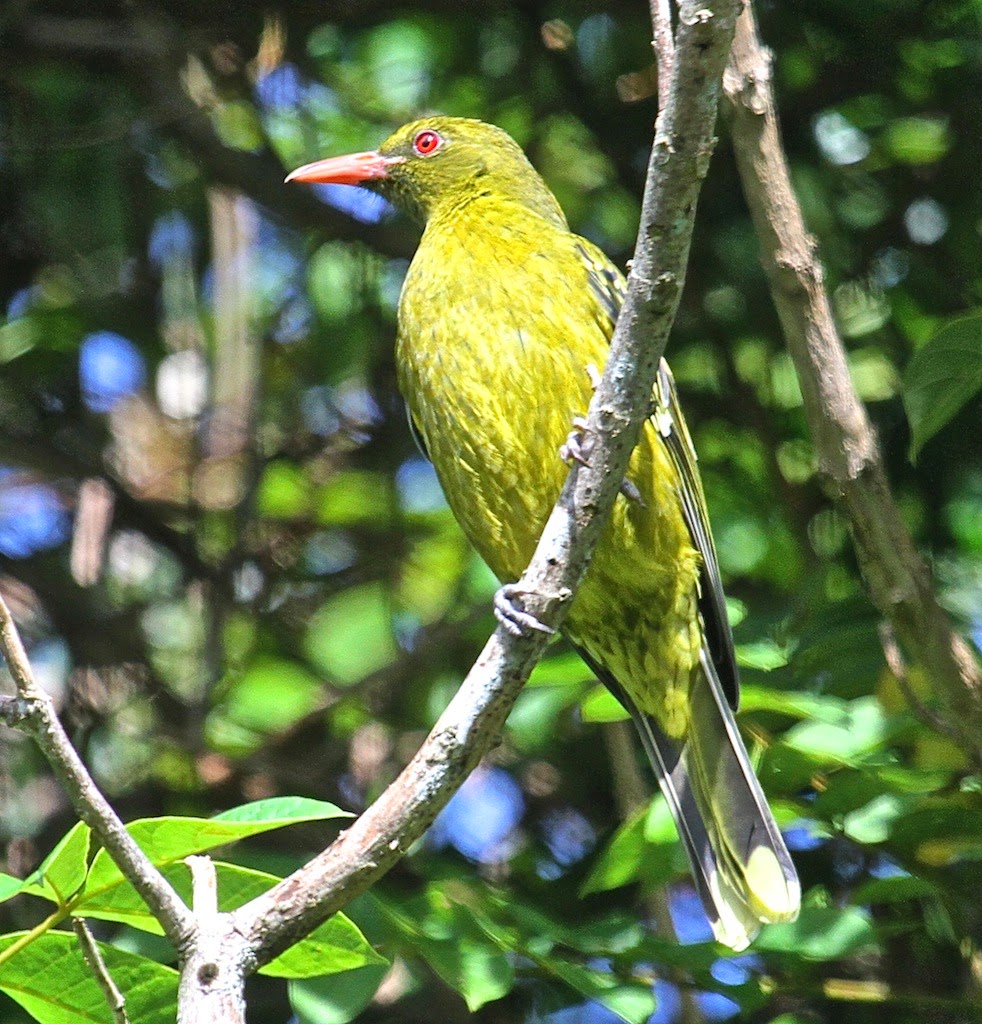 The cassowaries are on the move and in the early morning they leave the rainforest and walk down into the mangroves. To do this they must cross the road. 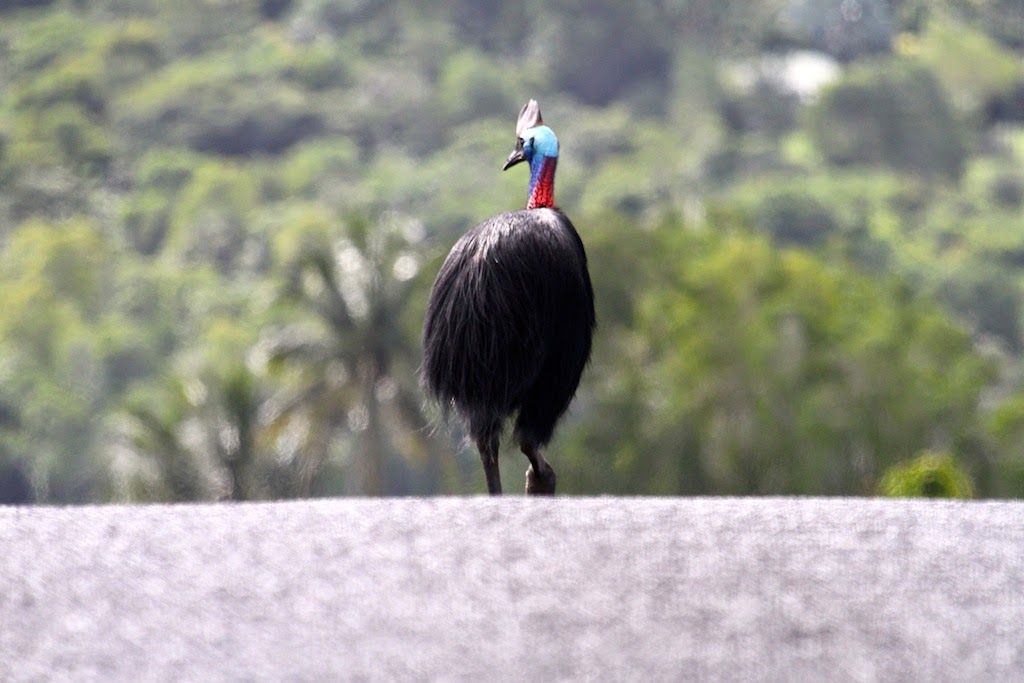 I was driving home from a quick early morning trip to town when I saw cassowary Hagar standing in the middle of the road, at the top of the hill. A screech to stop and I jumped out of the car with my camera.  I saw that Rainbow was with his dad Hagar, he had been hidden by the rise of the road. Hagar was plucking angrily at his feathers while Rainbow was walking toward the fence. 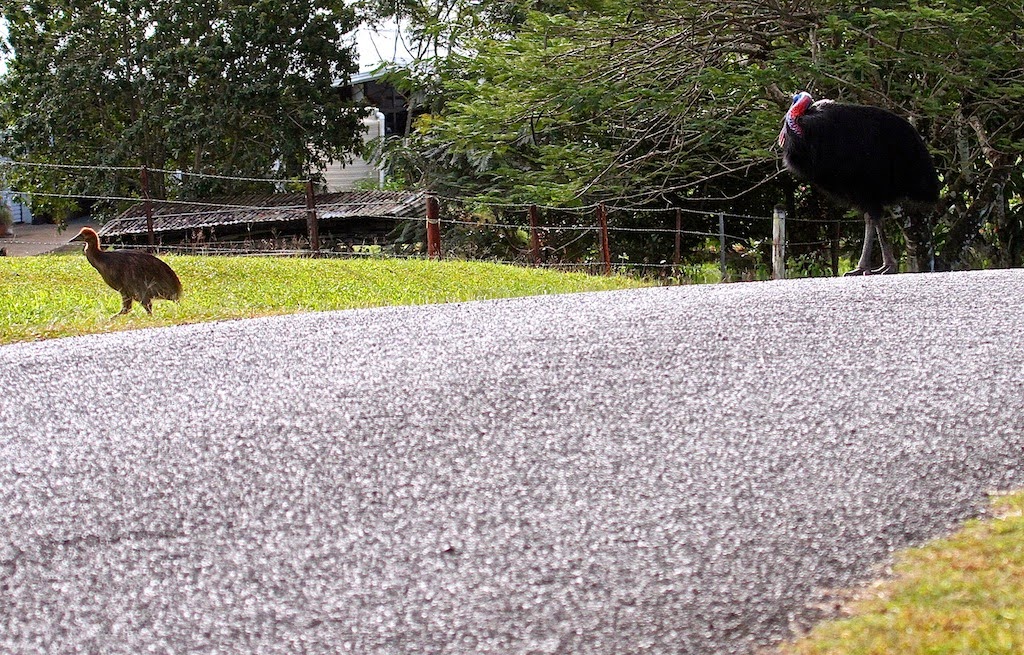 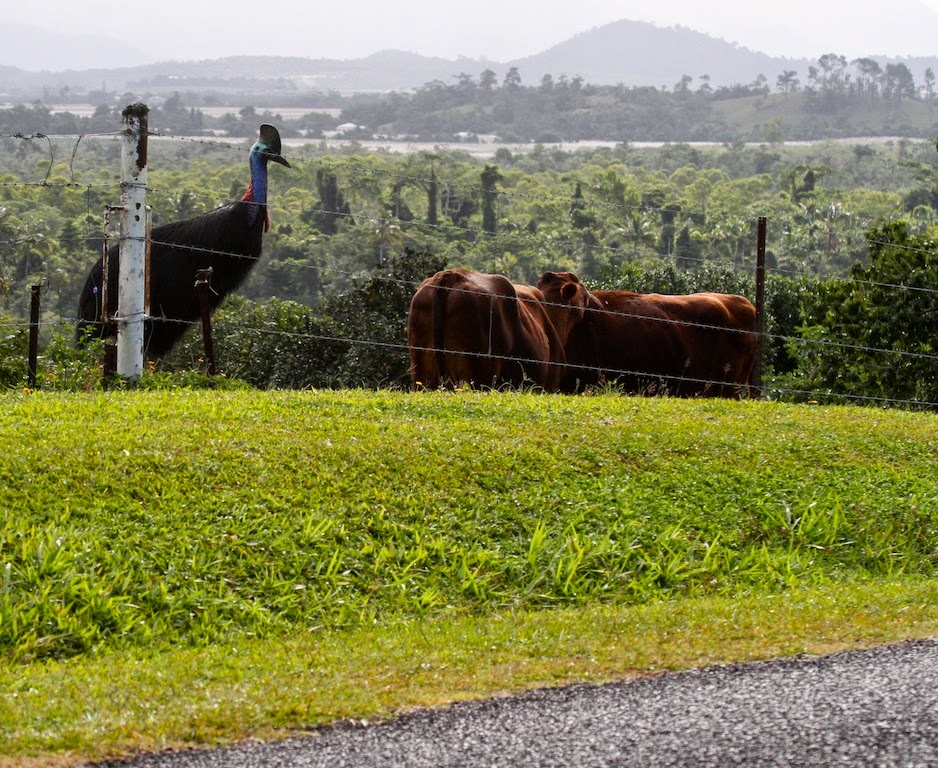 Then I saw cassowary Queenie with the cows, she was calmly looking at Rainbow, without any aggression. Rainbow moved toward Queenie.

Quickly Hagar went to Rainbow uttering what sounded  like air escaping from a balloon. Hagar appeared to be communicating with Rainbow. 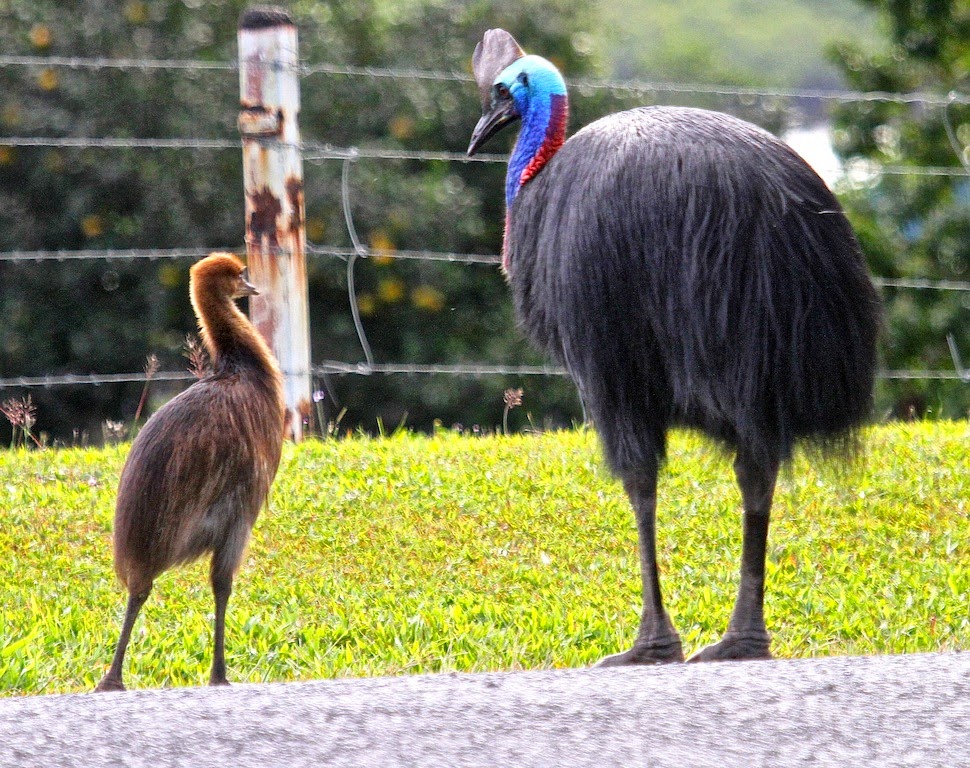 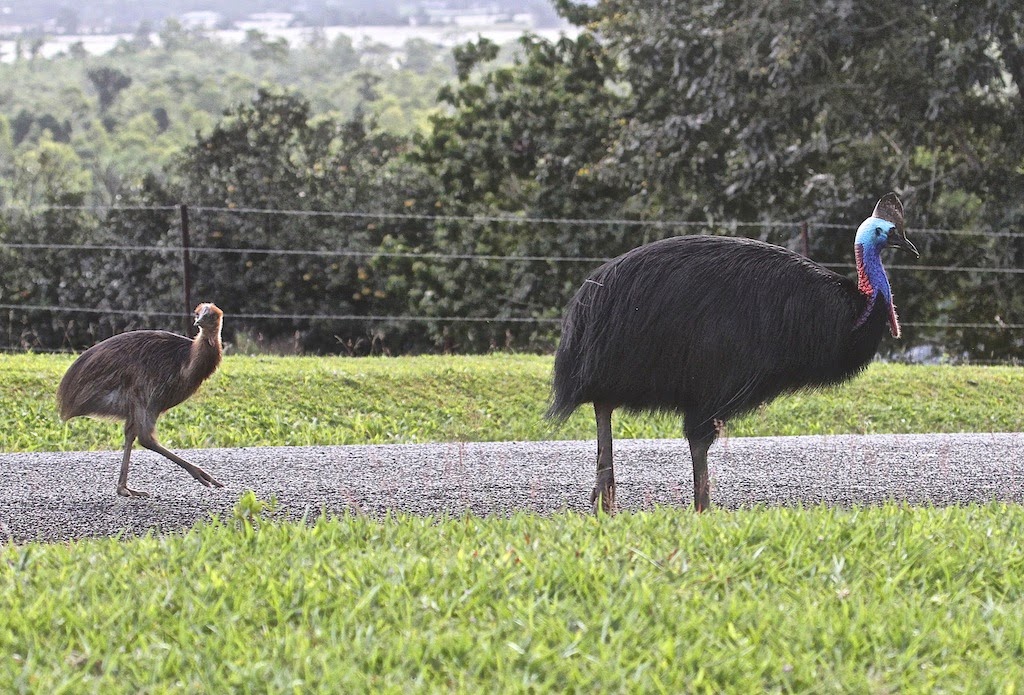 Rainbow got the message and together with Hagar they walked away from Queenie and down the hill towards the mangroves. Rainbow gave one look back.

Meanwhile, Queenie was standing silently looking at them, unable to follow because of the fence. 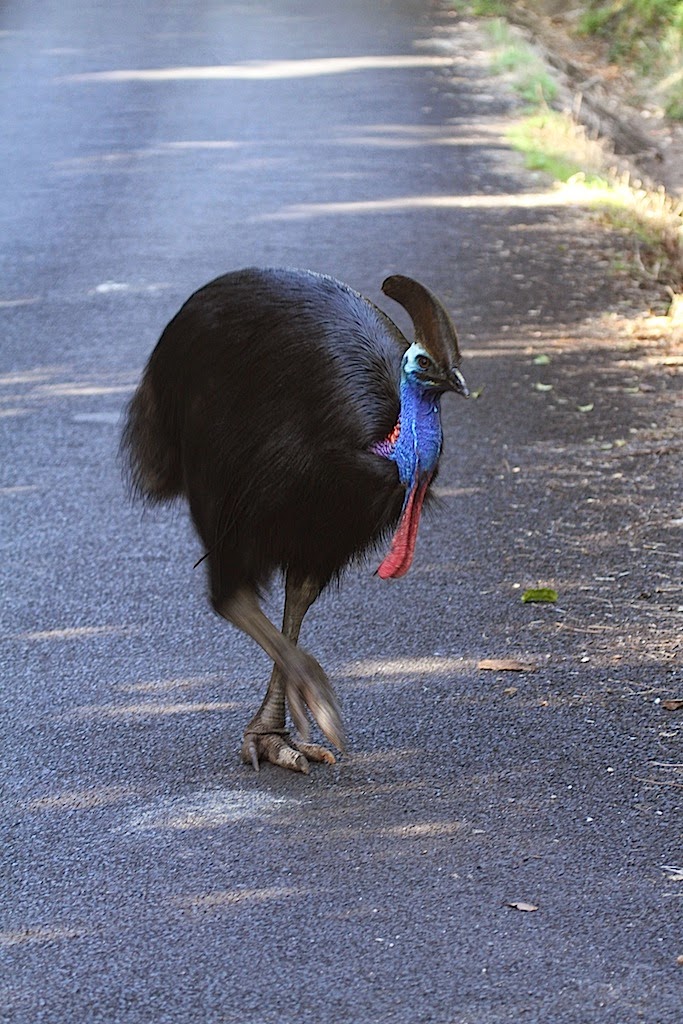 Matriarch cassowary Jessie has also been using the road as a connecting corridor. Again this week I saw her chasing Snout.
Snout went one way and little Ky the other. Jessie showed no aggression toward Ky and did not chase him, but she certainly frightened Snout. 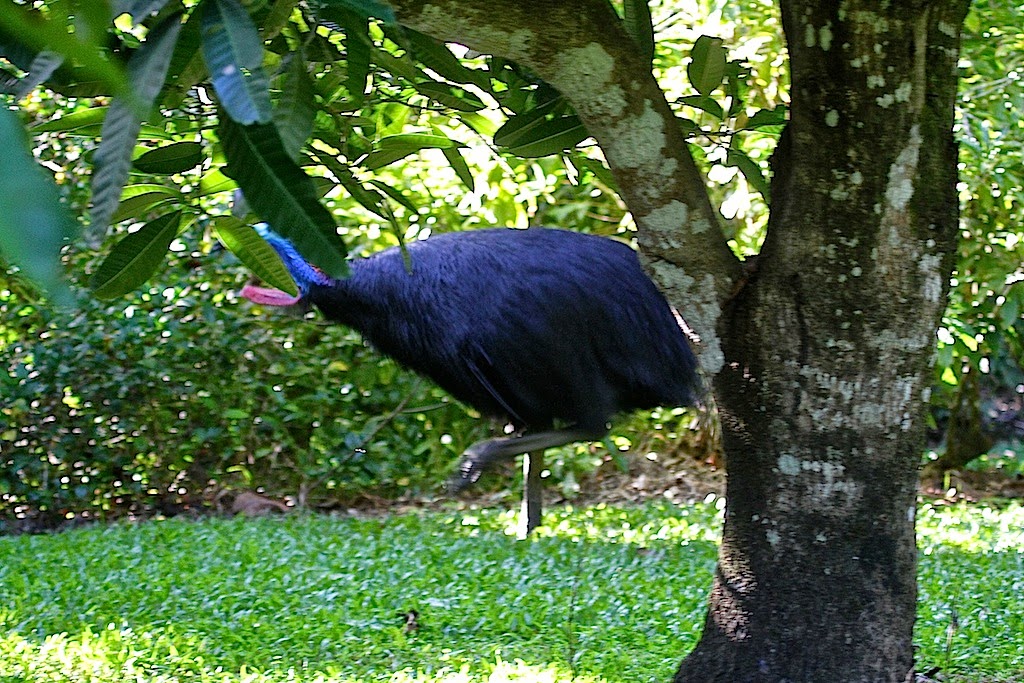 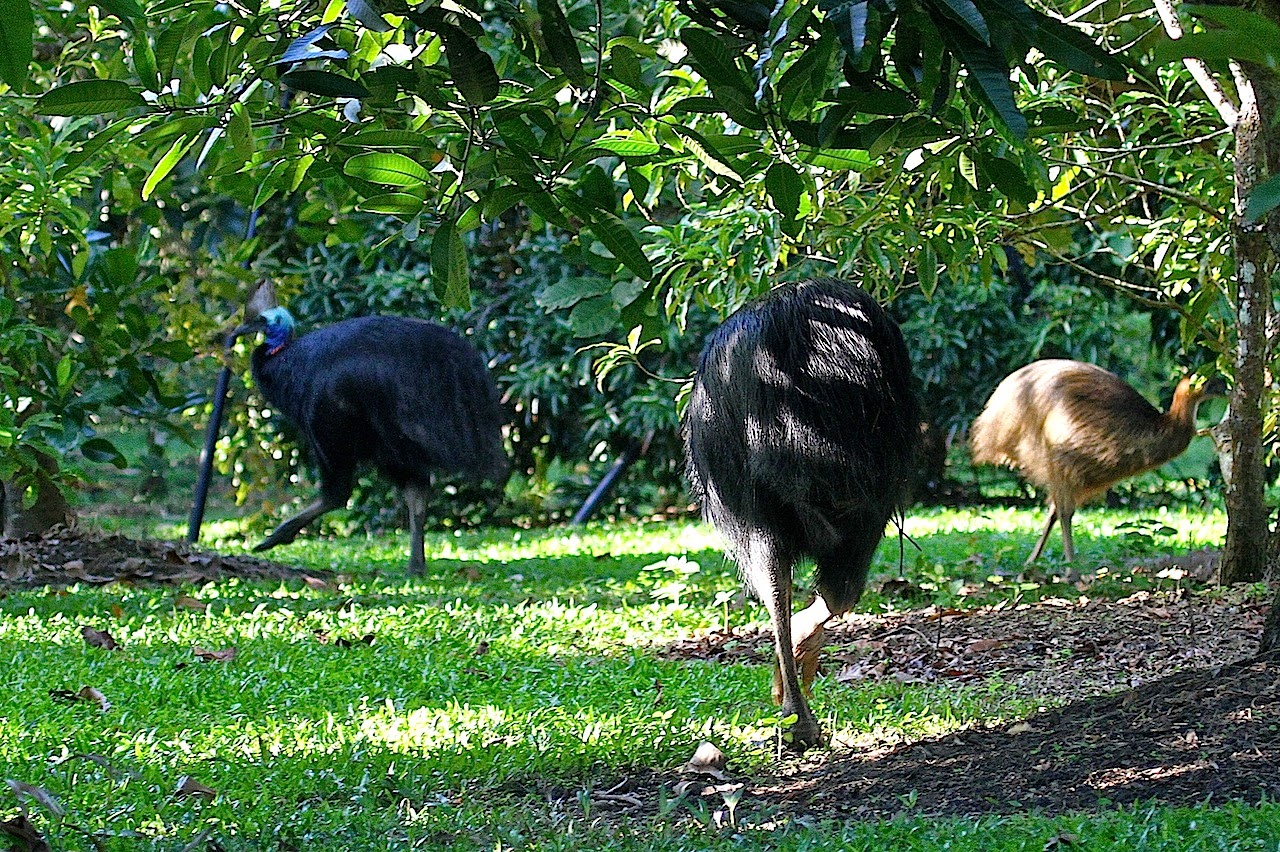 Ky and Snout both ended up on the road Ky pulling out his chest feathers in frustration.

Jessie did not follow and disappeared into the mangroves.

Ky is growing fast and while he was having a bath this week I noticed his neck feathers were starting to thin out. Underneath the mattered wet, brown feathers I could clearly see where his skin was starting to turn blue. 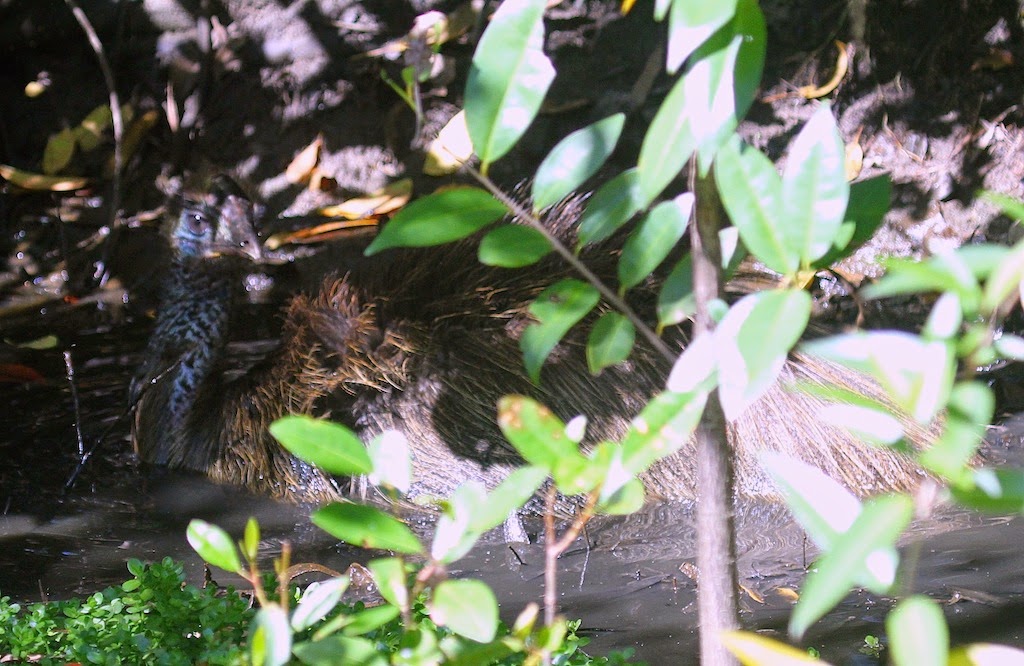 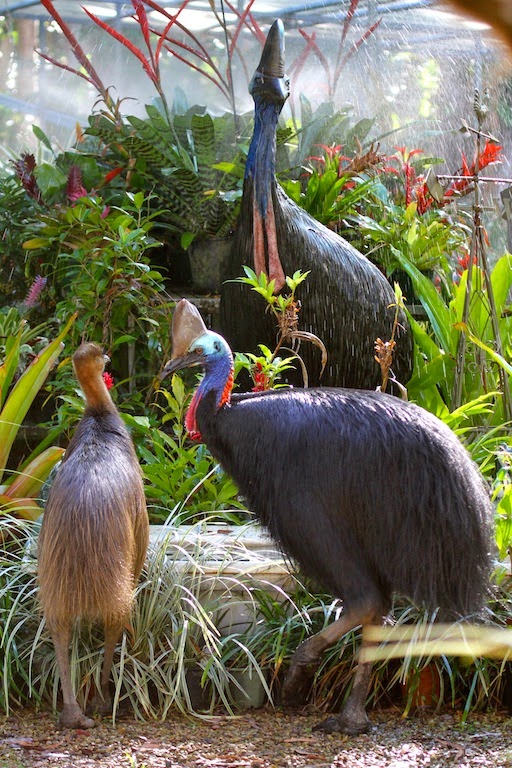 Snout and Ky still walk through the nursery they appear to favour drinking the water out of the old bath under Plastic Cas. You can see the wet mud on Snout and Ky's feet as they had just come out from the mangroves.

Rainforest fruits are patchy at the moment. There has not been a big fruit set on the Quandong, Elaeocarpus grandis
however, I am seeing quite a bit of Cassowary plum, Cerbera floribunda, in the scats and this is strange as they normally fruit in summer. Pandanus fruits are just starting to ripen and they are a cassowary favourite. 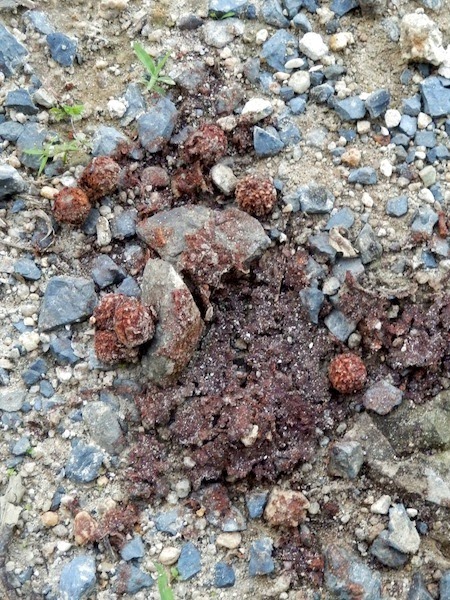 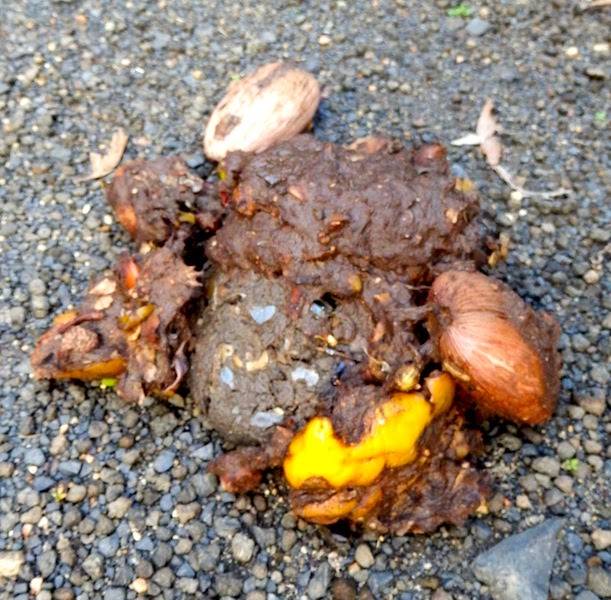 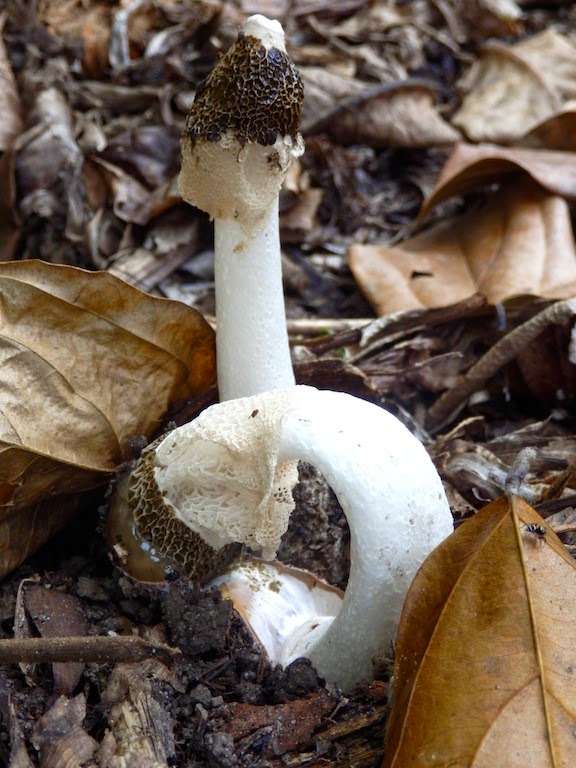 I was photographing a stink-horn fungus this week when Cassowary Queenie walked up behind me and ate it. It happened all so quickly and I got such a shock I missed the shot. I was lucky to get one photo of the fungi before it disappeared. These fungi are a delicacy in some parts of Asia. It is documented that cassowaries eat a wide range of fungi. 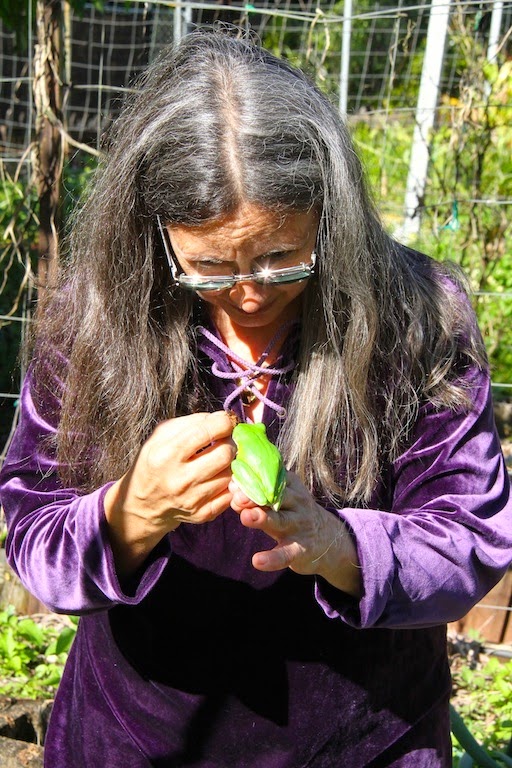 Deb Pergolottie from the Cairns Frog Hospital came down this week. A white-lipped tree frog which had  been sent to the frog hospital in Cairns from Coral Coast Vets Innisfail was ready to be released. Deb asked if she could release the frog in my veggie garden. Of course I said yes.

In Cairns there is a dedicated frog rescue and rehab facility which has been running as a 'frog hospital' for 16 years. It is a small group with a big workload and responsibility and they welcome support in many forms. Their website is www.frogsafe.org.au  You can call them on 07 40450373.

This frog has lost the sight in one eye but otherwise is now healthy. Deb offered him a tasty native Australian cockroach and then released him. 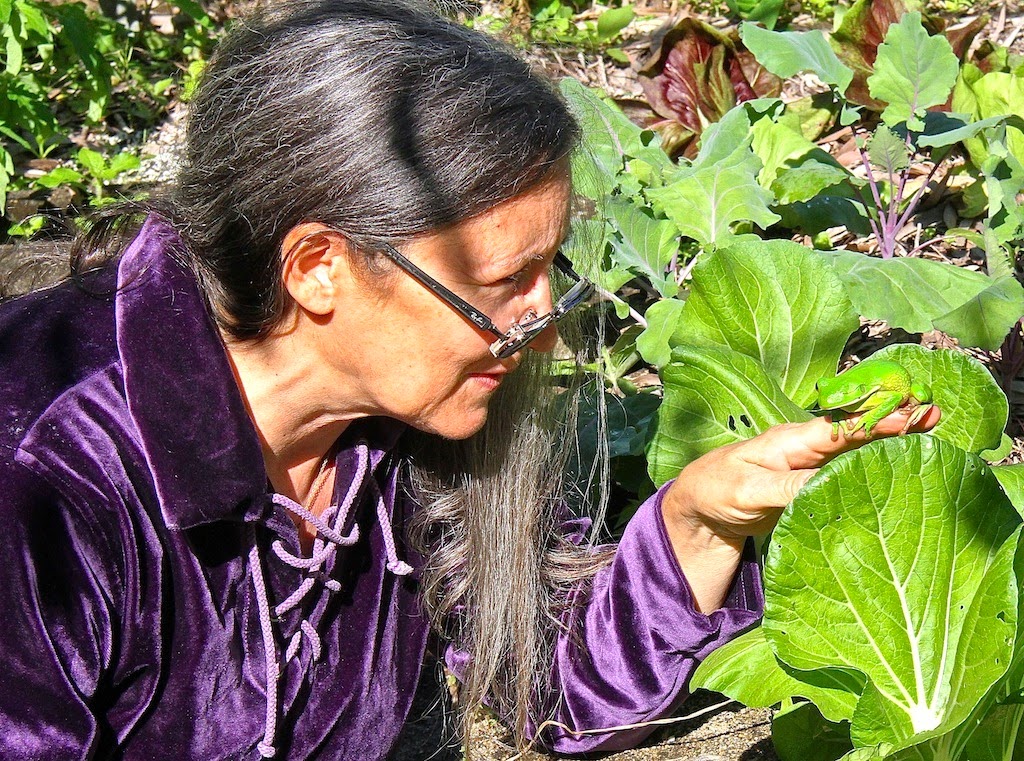 The frog quickly hopped away to take up his new job as insect controller in my veggie garden.
Well done Deb, another frog saved by the Cairns Frog Hospital. 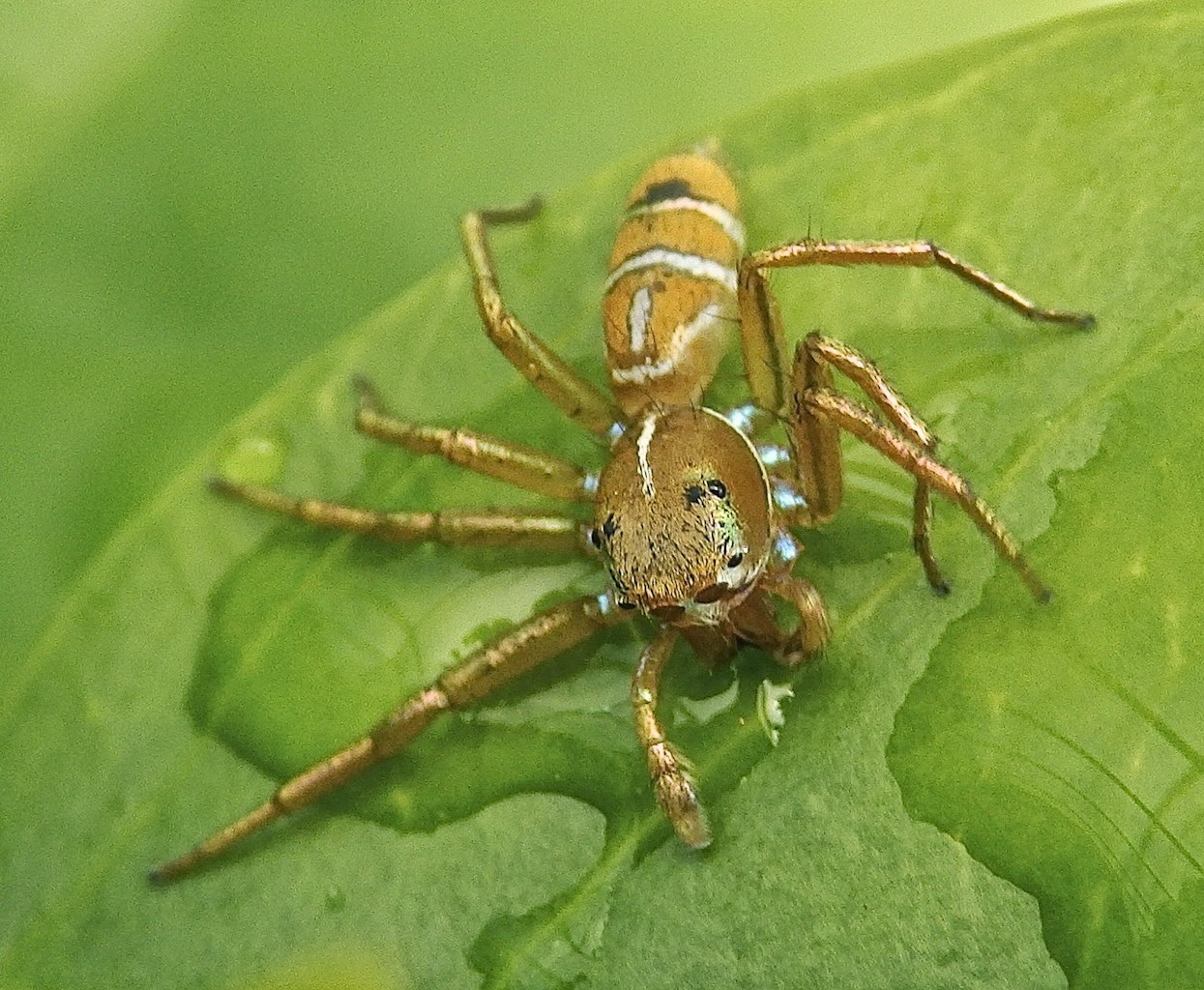 In the warm winter sun Jumping spiders have been on the hunt with Cosmophasis species being the most active. 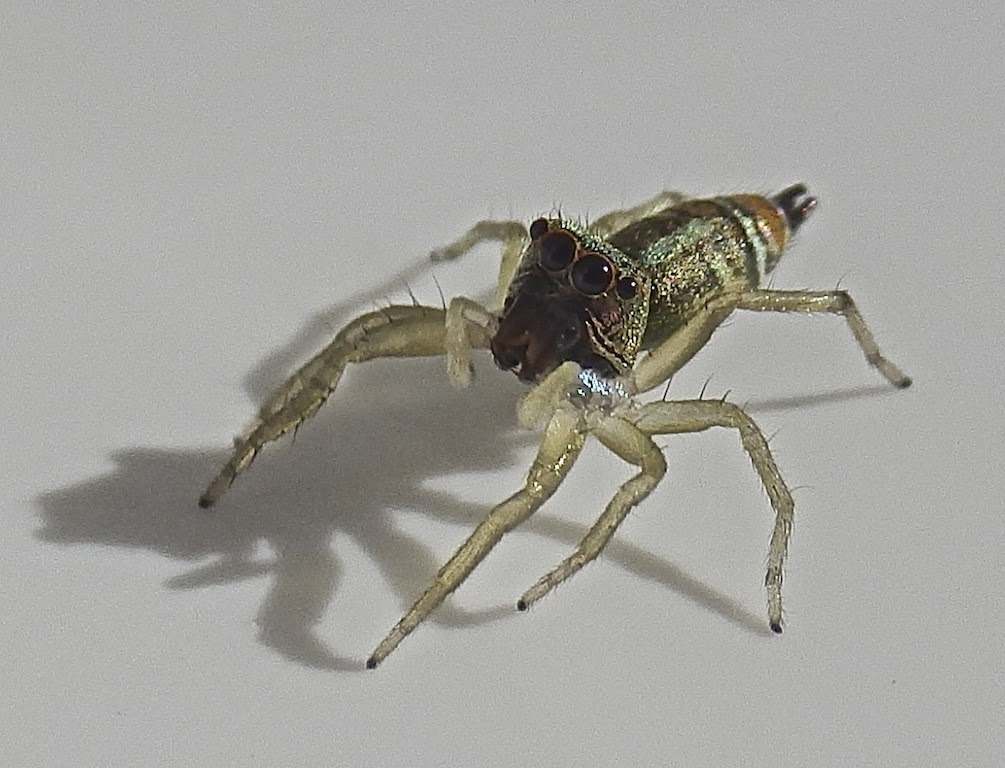 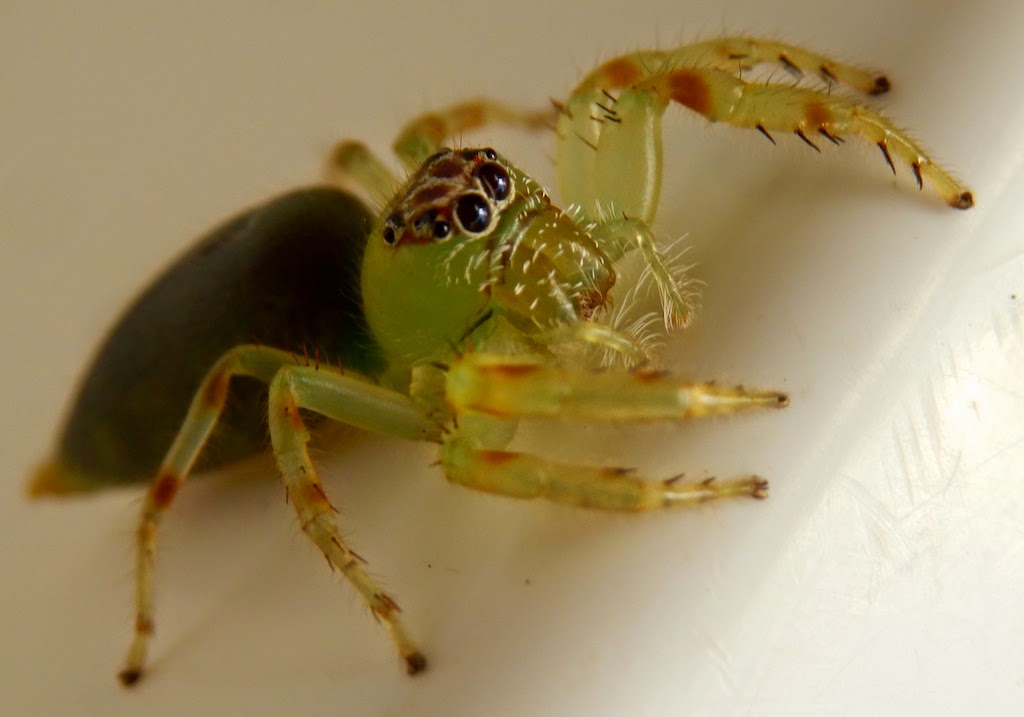 However, I also found this very dark form of a female Mopsus mormon. 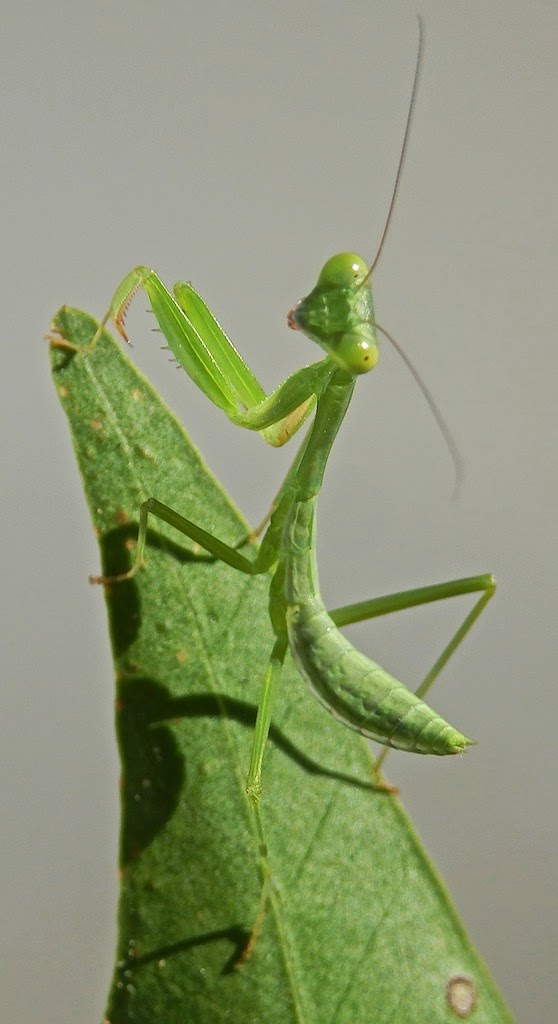 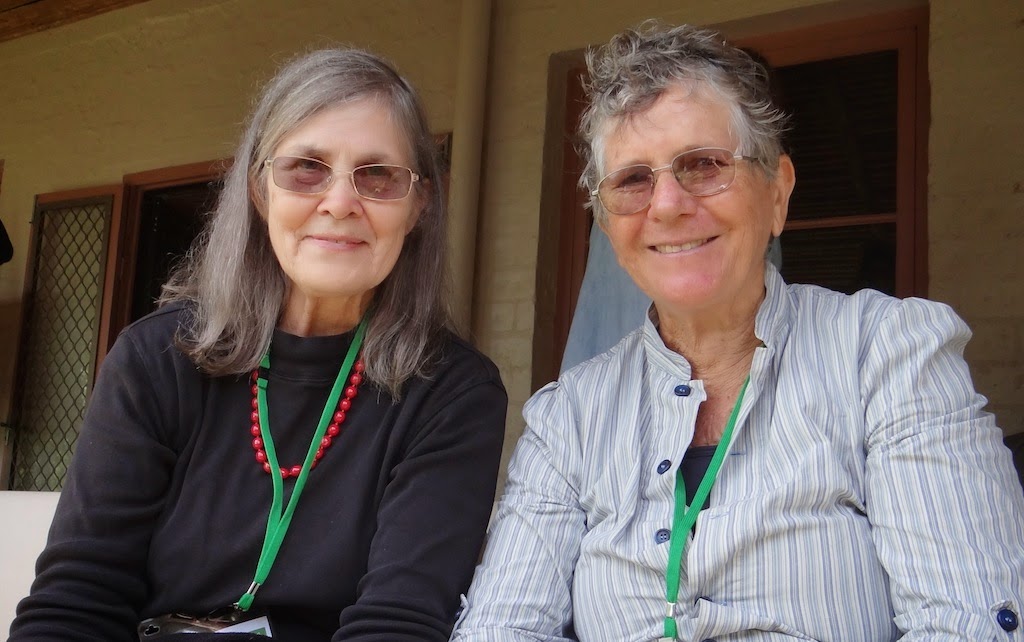 The Rainforest and Reef Conference at Ninney is over and it was an amazing success.  Before the Conference started I caught up with rainforest hero Dr Aila Keto AO. We shared many tales about the long campaign to have the rain forests of north Queensland listed as a World Heritage site. 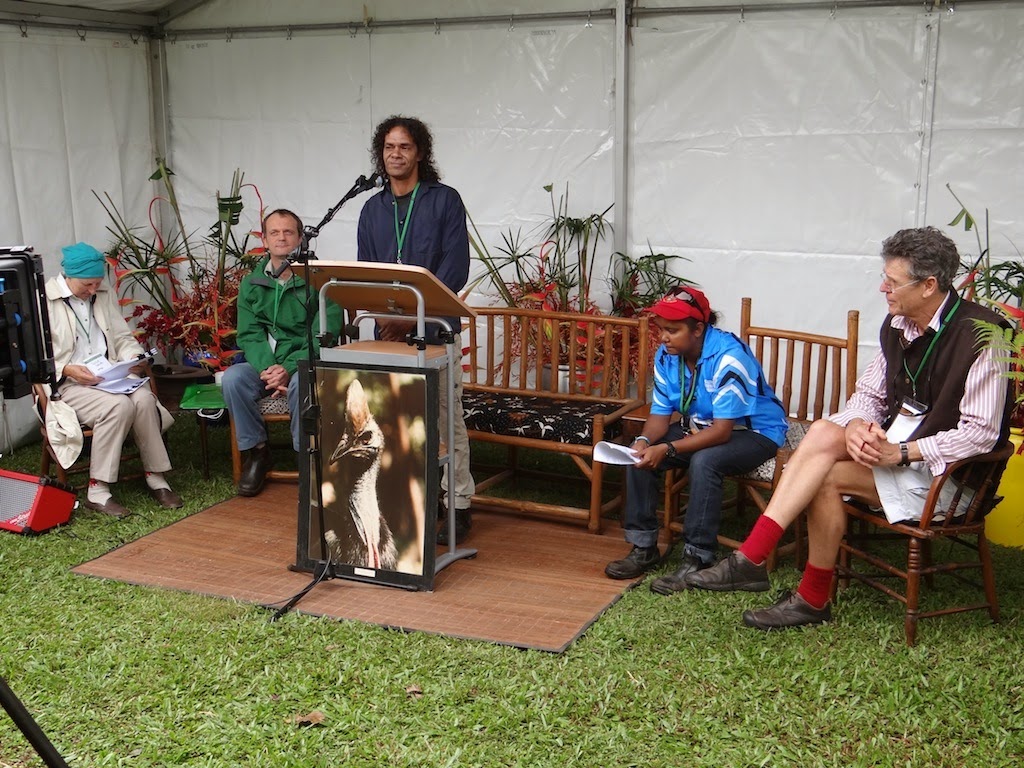 The Conference Was opened by Suzie Smith of Wildlife Tully.

Aboriginal traditional owner and Djiru elder, Leonard Andy performed a Welcome to Country before joining Whitney Rassip and Dr Michael Davis of University of Sydney for the first panel discussion on Djiru Traditional Hunting and connection to sea and conservation of significant animals.

For the full details on the Rainforest and Reef Conference at Ninney Rise go to:-
www.ninneyrise.com


On Tuesday at 9.30am the book 'Jigurru' will be launched at the Shire Hall Innisfail. 'Jigurru' is a pictorial story of the rainforest created by Liz Gallie, Anne Wilkinson, and myself with advise and guidance from Mandubarra elder Nellie Epong. I would love to see you there.