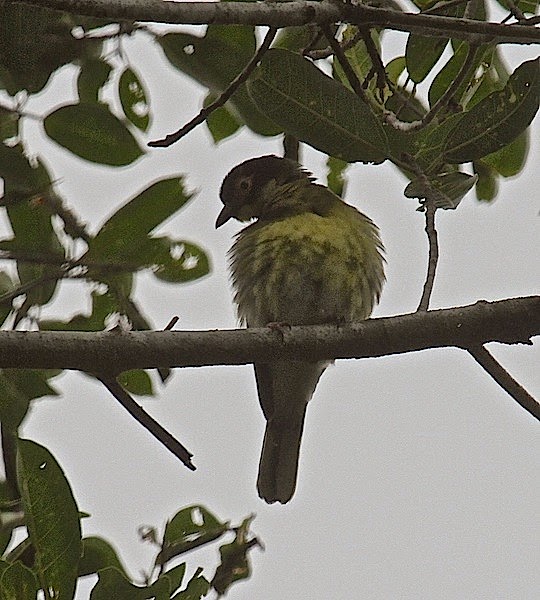 The rain is relentless and while I can sit inside warm and dry, outside the animals suffer the full force of Mother Nature. Over the last 31 days only one day has been without rain. Life is not easy in the Wet Tropics but there is hope with what looks like a break in the weather next week.

The Mandaburra Turtle Rehabilation Centre received another turtle on Thursday. An old green sea turtle was brought to the Centre by the Girringun Rangers. The turtle, Cindy-lou, named after one of the Girringun Rangers, was found floating in the mangroves at Cardwell. It was estimated that Cindy-lou is around 80 years old. She is covered in barnacles and shows the evidence of a boat strike on her carapace. Half of her rear flipper is also missing.

The turtle was unloaded from the holding tank on the truck and lifted into a tank in the Centre. She was examined by the Girringun Ranger and Henry Epong. Nellie Epong covered Cindy-lou with a towel and we all left her alone to rest safely under the mosquito net. 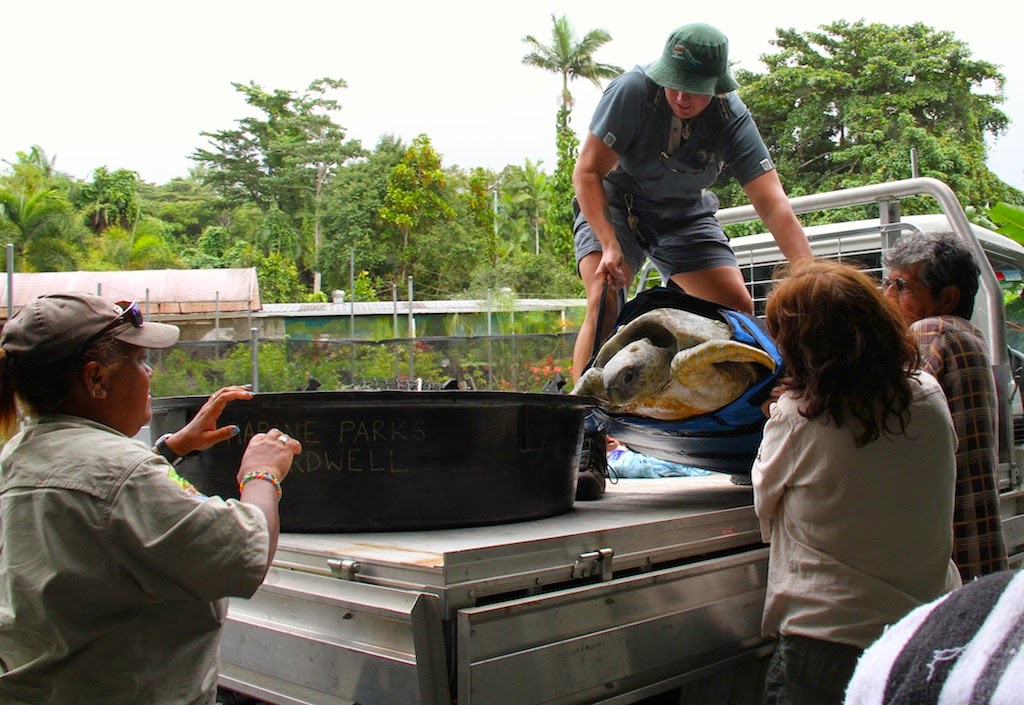 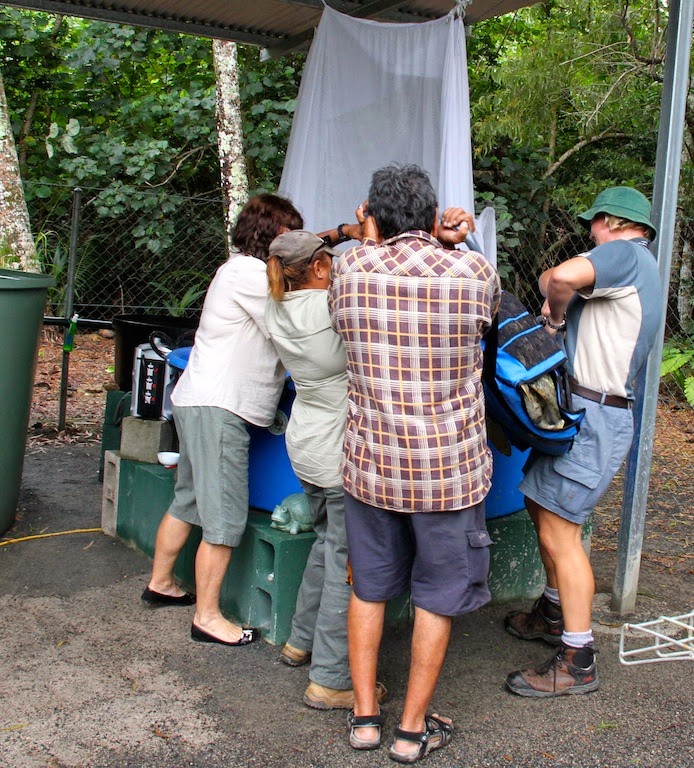 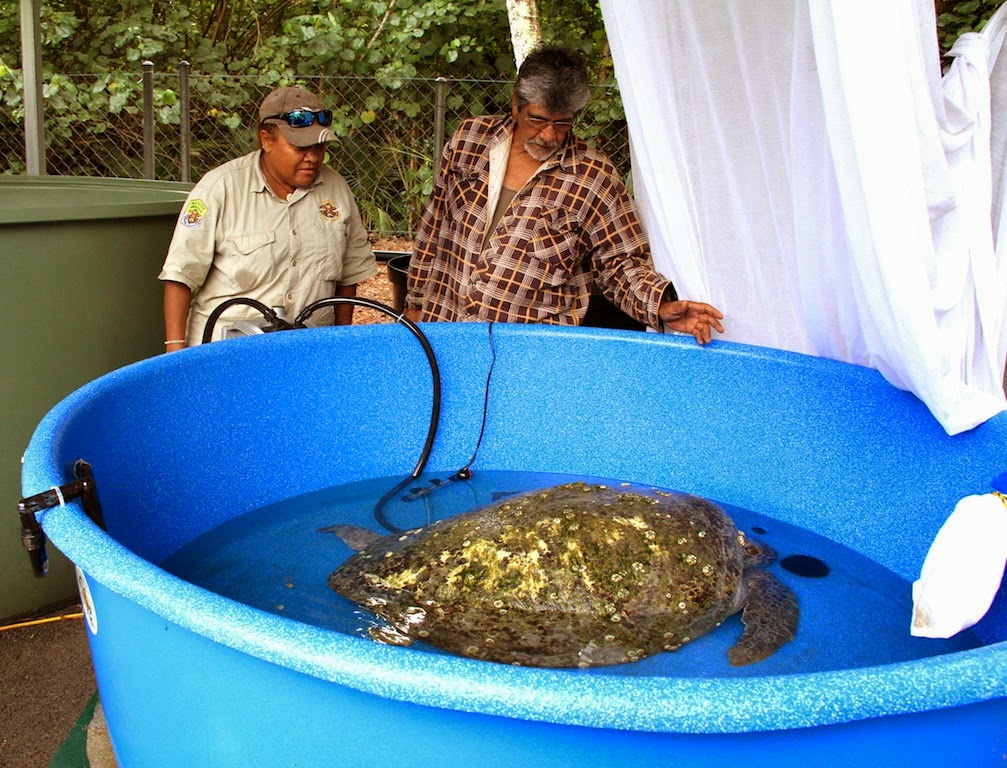 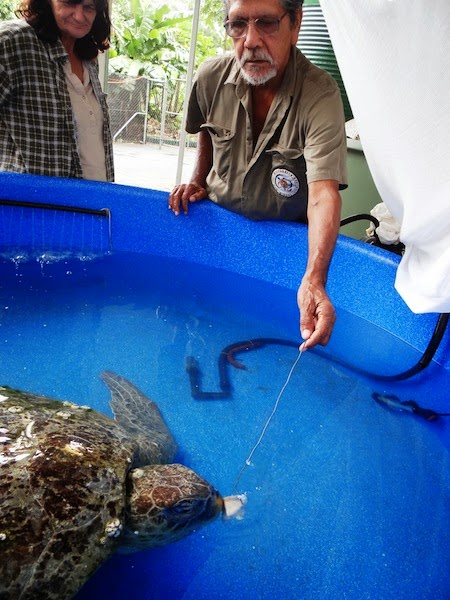 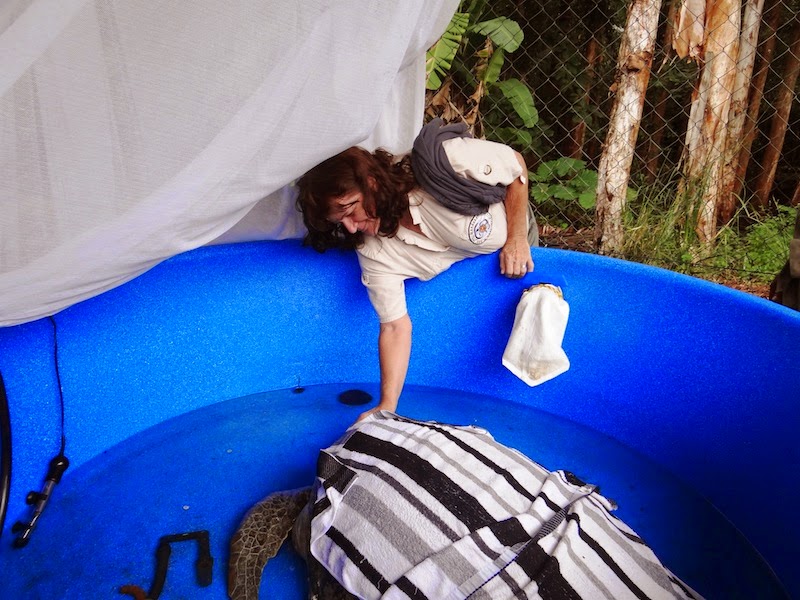 The next day Henry and Nellie added more water to the tank. Henry offered Cindy-Lou a squid, she grabbed it and then ate another three small squid.
Today she is looking bright and active and ate nine squid and some lettuce. She will be transferred into the larger tank on Sunday. 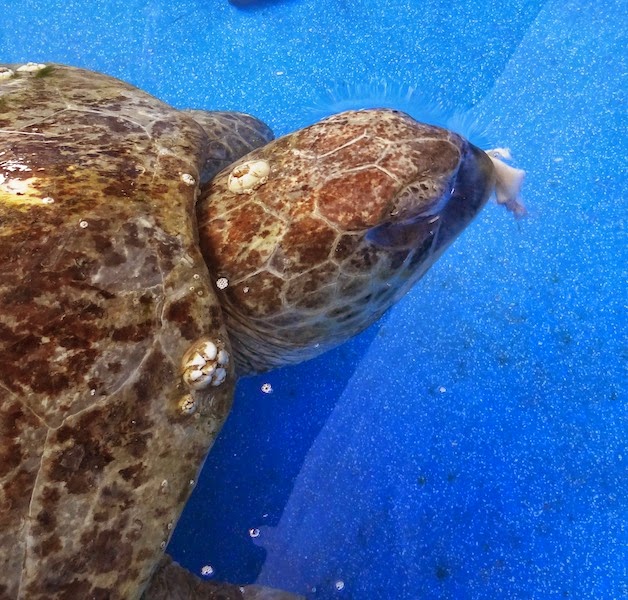 Green sea turtles are one of the largest turtles in the world. Males are larger than the females. Green turtles mainly feed on sea-grasses and algae but they will eat jellyfish and sponges.

As with many endangered species loss and disturbance of habitat are the chief threats to their survival. In the case of the Green sea turtle it is all of this, the loss, the disturbance and the destruction of their nesting sites as well as the loss of the sea-grass meadows that sustained them. All these factors threaten their survival.

Female green sea turtles only mate on a cycle of two to four years. They leave the sea to lay over 100 eggs in a pit in the dune line behind the beach. They dig the pit with their flippers.  The eggs take about two months to hatch.

The cassowaries are on the move, my neighbour Taggs hadn't seen a cassowary for several months when this week he saw six in one day walking around his property. 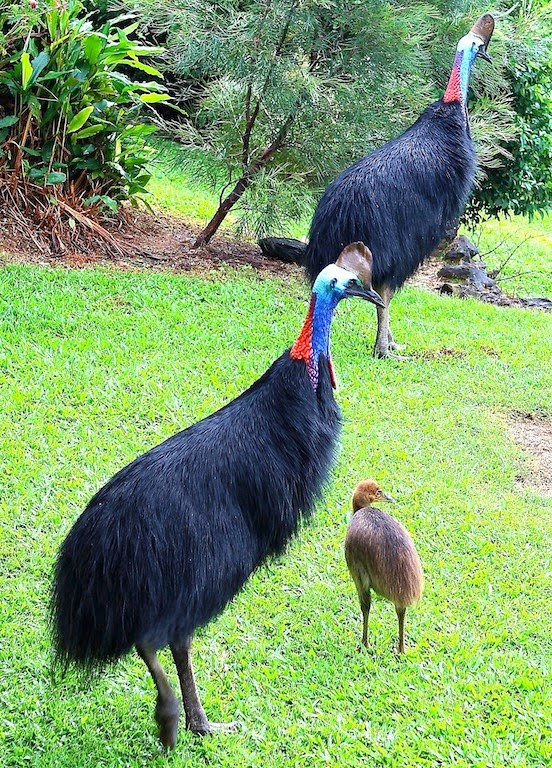 In the morning Taggs saw Hagar with little Rainbow and another male Cassowary which I think was young Don. Thanks for the photo Taggs. (see left).

In the afternoon Taggs saw but did not get a photo of Jessie. Then Snout and Ky turned up later in the same place.

I have looked around to see what might be fruiting in that area to attract the cassowaries but could not find anything. Perhaps they have the 'wanders' at the moment and are crossing into each other's home range.

In the same area yesterday Martin saw Jessie walking with Hero. Over the last few weeks Jessie has given every indication that she was inviting courtship with one of the male cassowaries. As Hero lost all his chicks last year he is the senior male bird currently available. 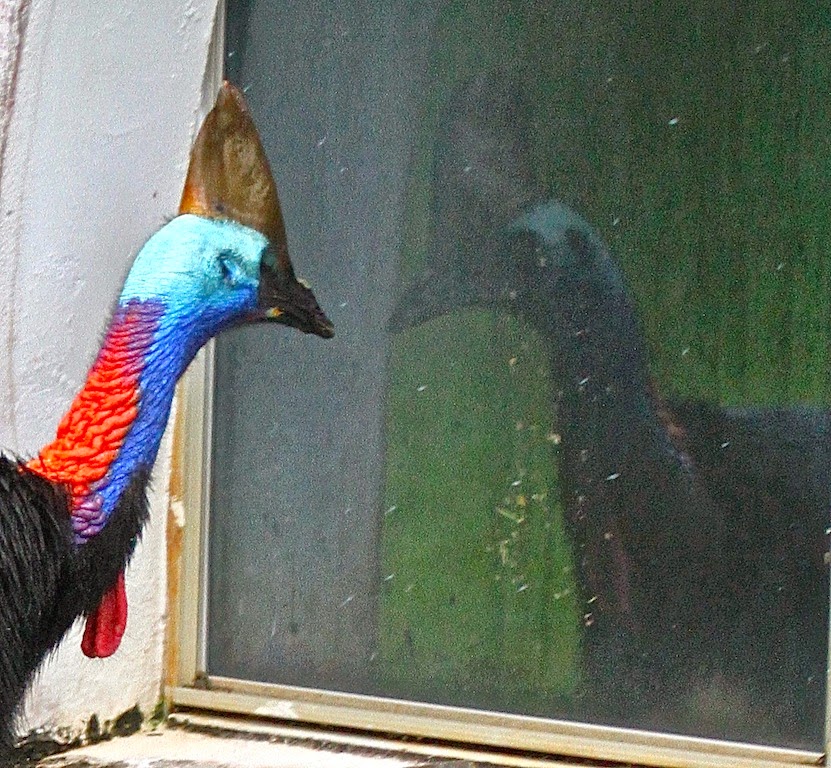 Liz reports from Mission Beach that Joov and Cyrillina are courting. So the cassowary breeding season is underway on the Cassowary Coast.

Snout is taking a great interest in his reflection and I have had to take precautions to protect the car and the windows around the house.

There is a difference in the behaviour of little Ky.
Where once Ky always walked behind Dad he now walks beside his father. 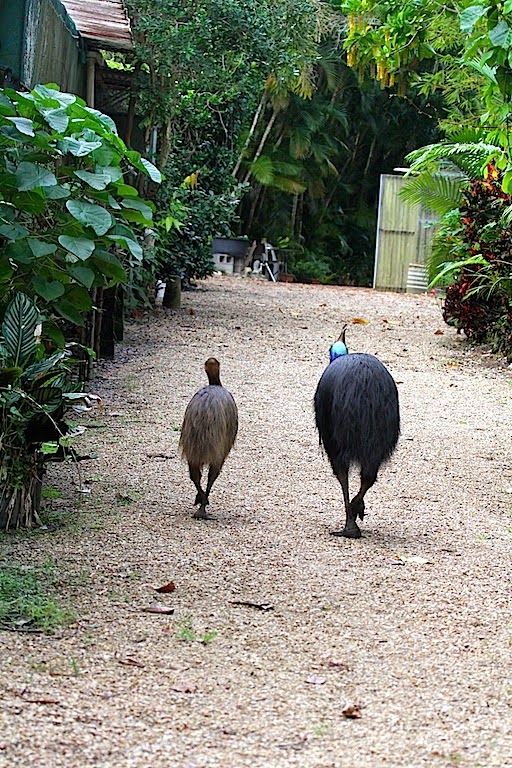 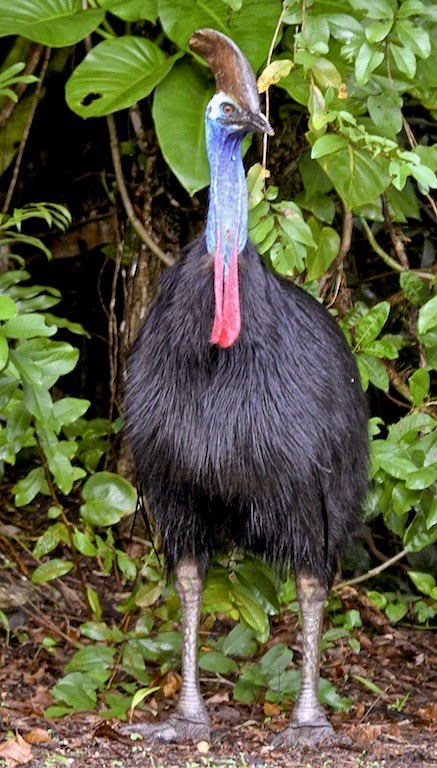 I saw Jessie early in the week by herself so it will be interesting to see her movements  over the next month. If she is courting Hero, will they remain in his home range and not come down to the end of the Point?

It is here where Jessie loves to wander in the mangroves and out onto the beach to feed on crabs. I have never seen Hero move around in this area.

I have not seen the other Coquette Point matriarch cassowaries, Peggy nor Clara for some time. It is months since I have seen the male Brown Cone. 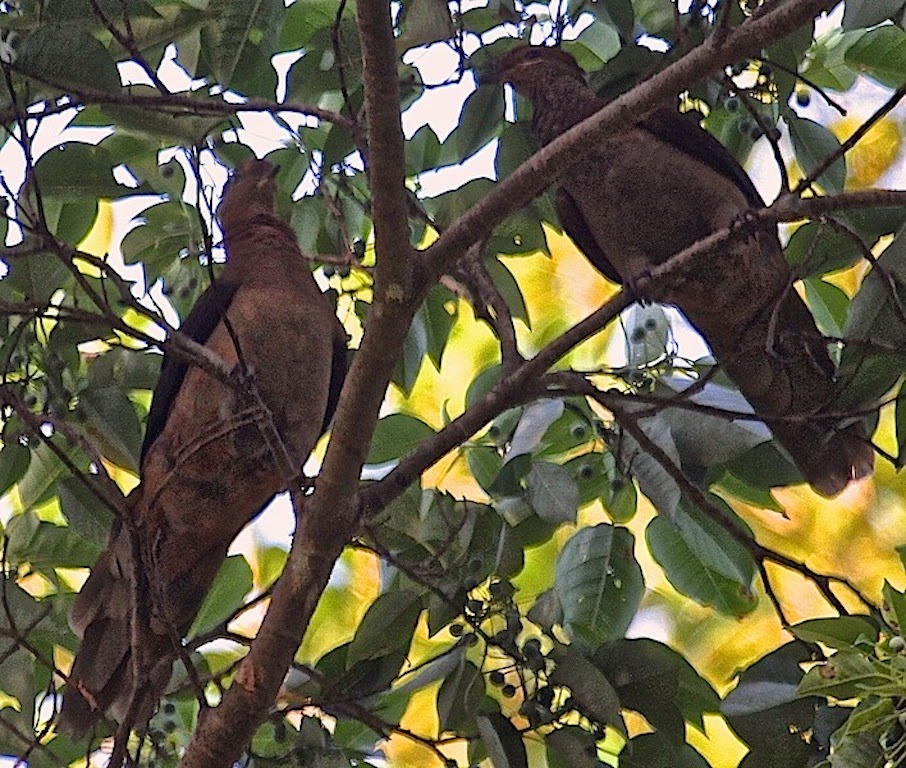 The brown cuckoo-dove is a large chestnut brown pigeon which inhabits the coastal rain forests from far north Queensland to the far south coast of NSW. It tends to be nomadic within its range and we mainly see it on the coast over the winter months.

Eight brown cuckoo-doves arrived at Coquette Point this week and I found them feeding on the fruits of the bleeding heart tree Homalanthus novoguineenis. 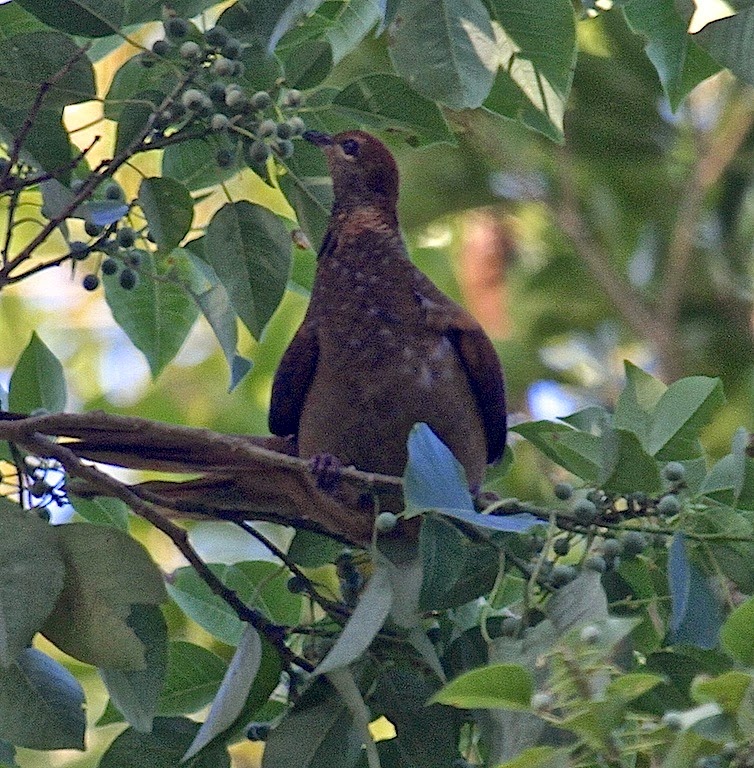 The male, below, has a slight iridescence around the neck and a white line under the eye.


The female has a fine pattern to the sides of her neck and a rufus cap to her head feathers. The white line under the eye of the female is more prominent.

Male brown cuckoo-dove reached for the fruits of the bleeding heart tree. 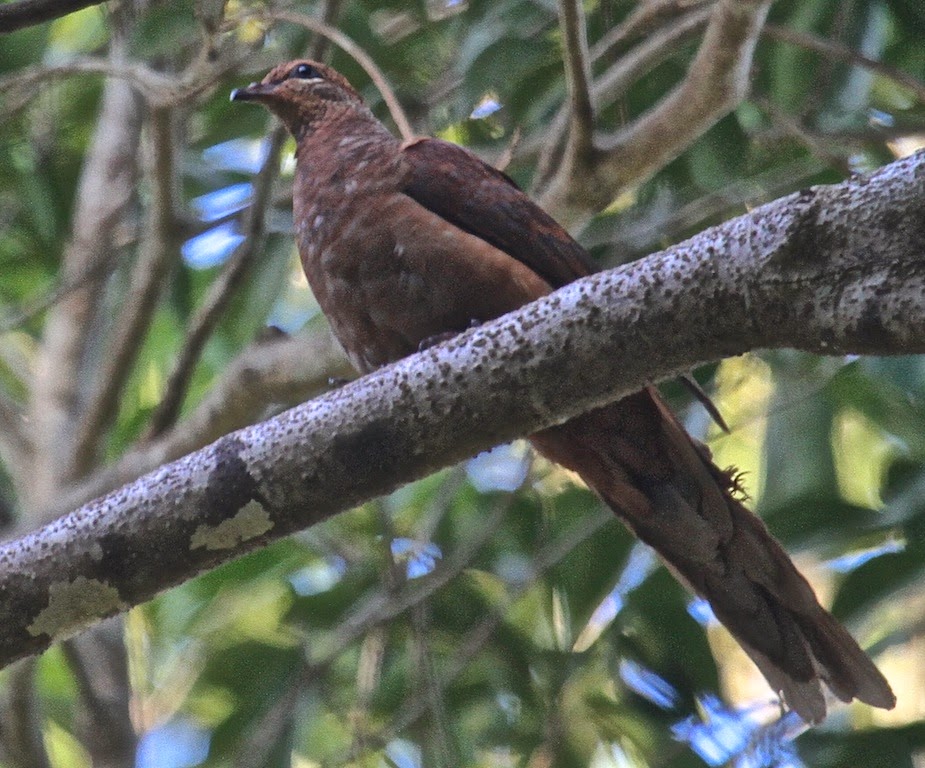 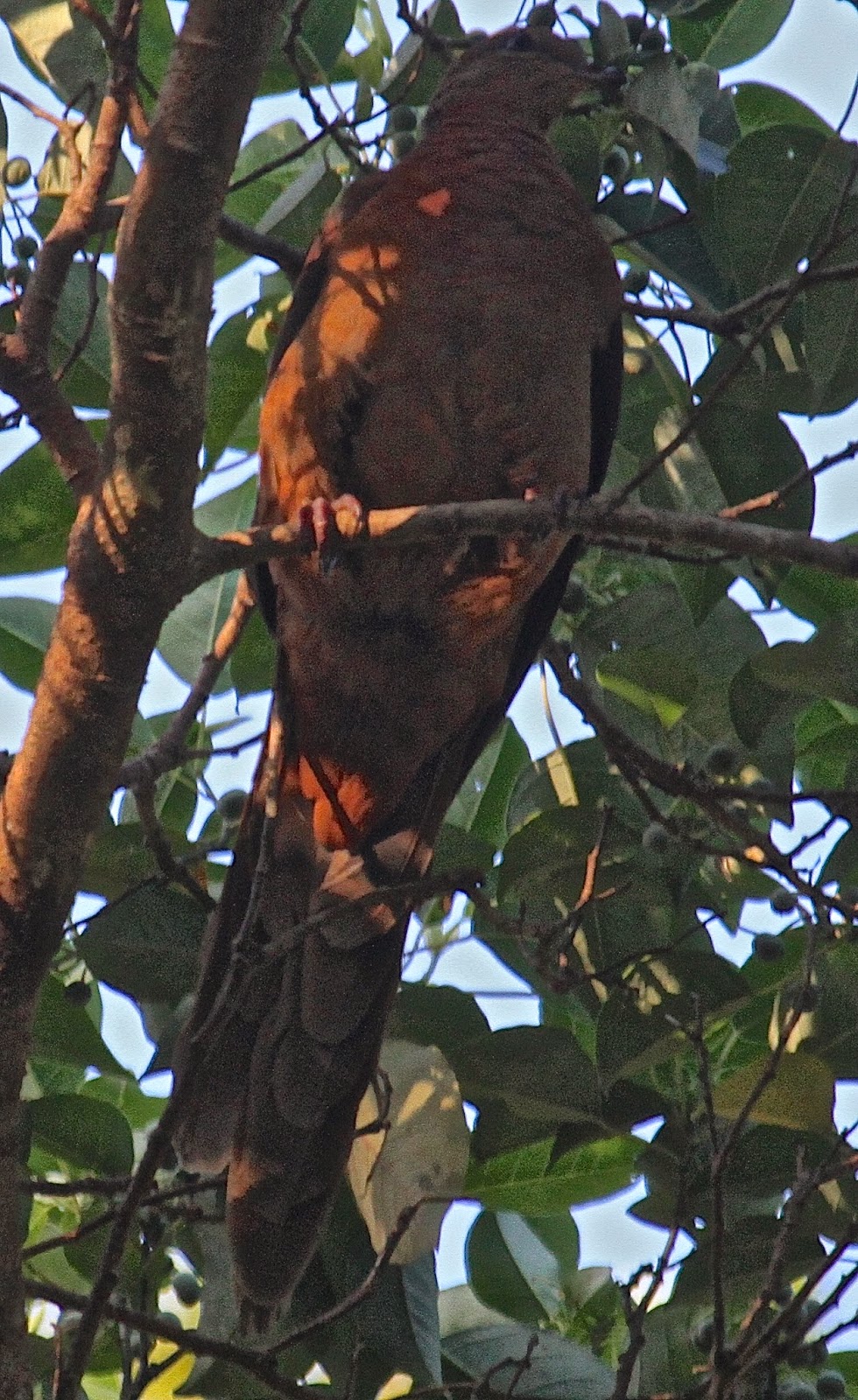 As if by magic the first bit of sunlight we have seen for the last week shone through the trees, it illuminated cuckoo dove's rich brown feathers.


From the tree a soft coo-coo sounded and I knew the birds were delighted that the sun had come out, even if it was late in the day and it only lasted for a few minutes.


The sound-scape of the rainforest at the moment is dominated by the loud scolding calls of the yellow oriole. The female has been answering his calls with a rolling chuckle. 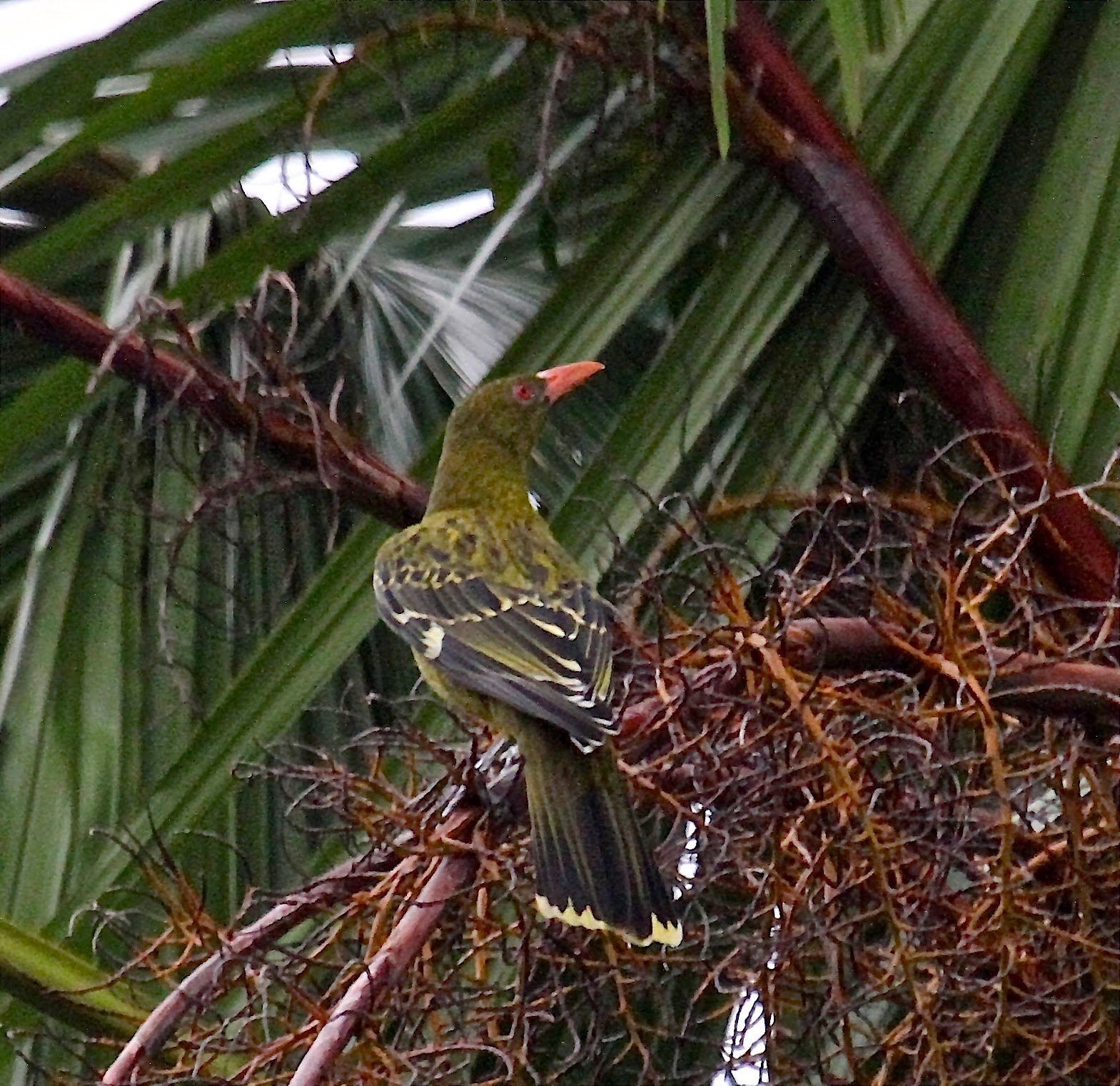 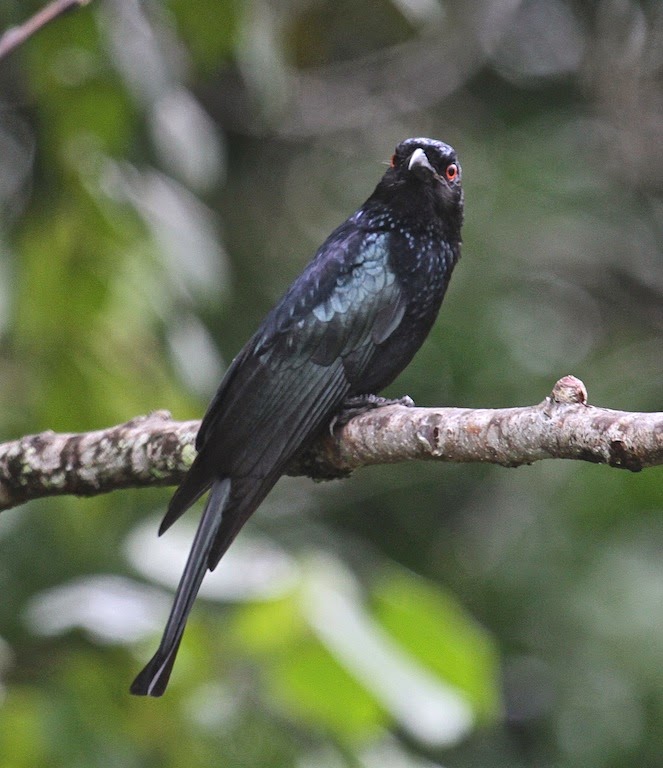 Not to be out done old drongo has been declaring his territorial rights with a cranky cackling. He often chases other birds from his hunting tree.
Drongo is especially annoyed when helmeted friar bird hunts in his tree.

When drongo started to complain friar bird turned his head in a circle of disdain and stayed put. I am sure I heard him laugh at drongo. 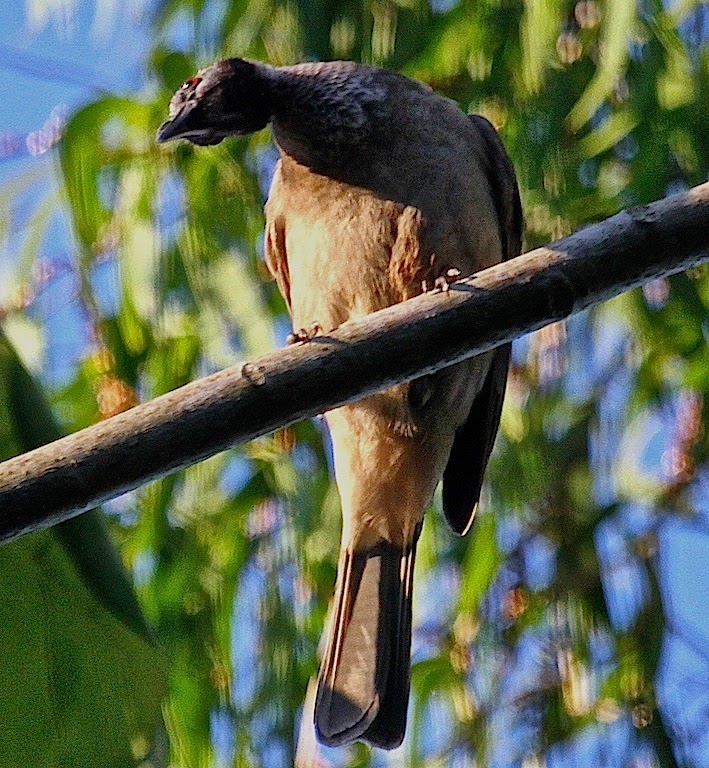 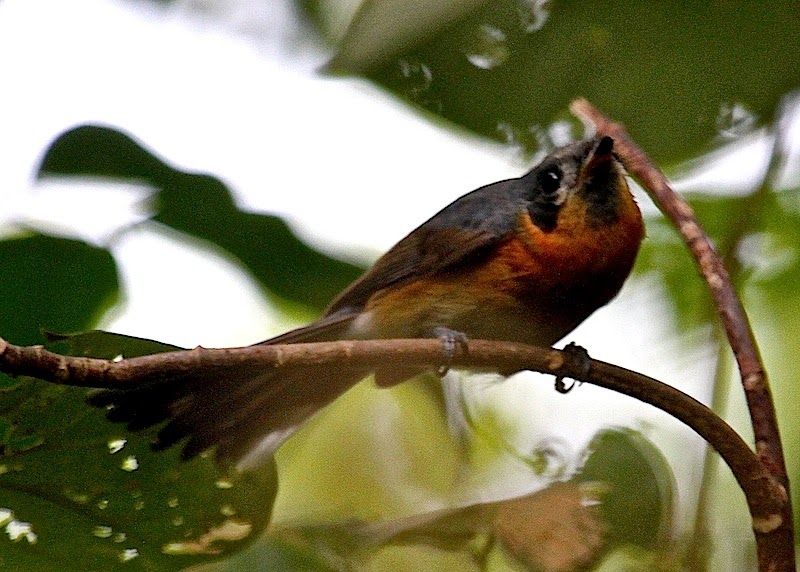 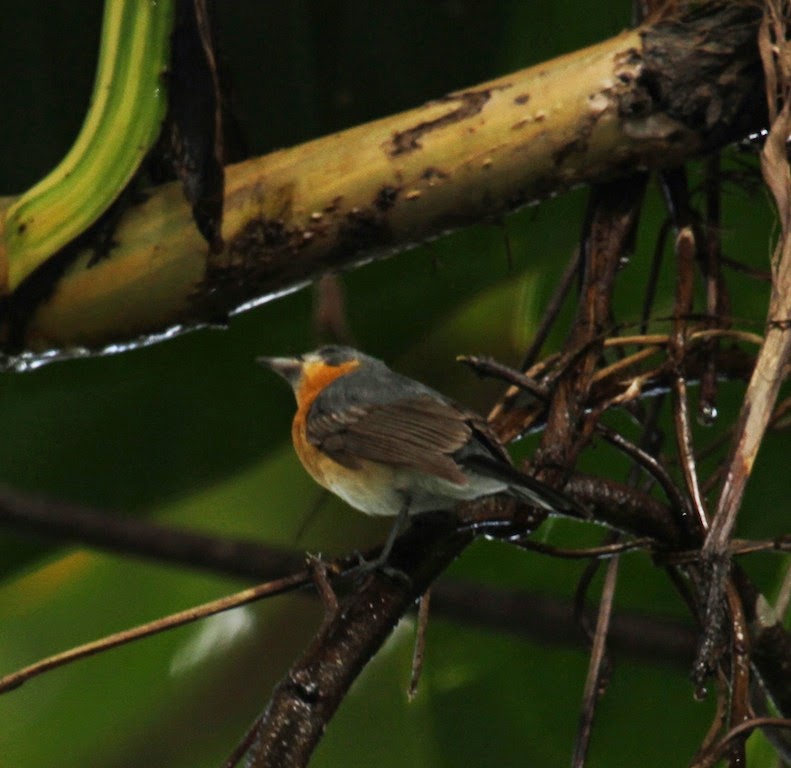 The brightly coloured little spectacled monarch can be heard every day buzzing about in the rainforest looking for insects. Her beautiful tail fanning the tree leaves as she hops about disturbing insects from their resting places. Even heavy rain does not  hinder her hunting. 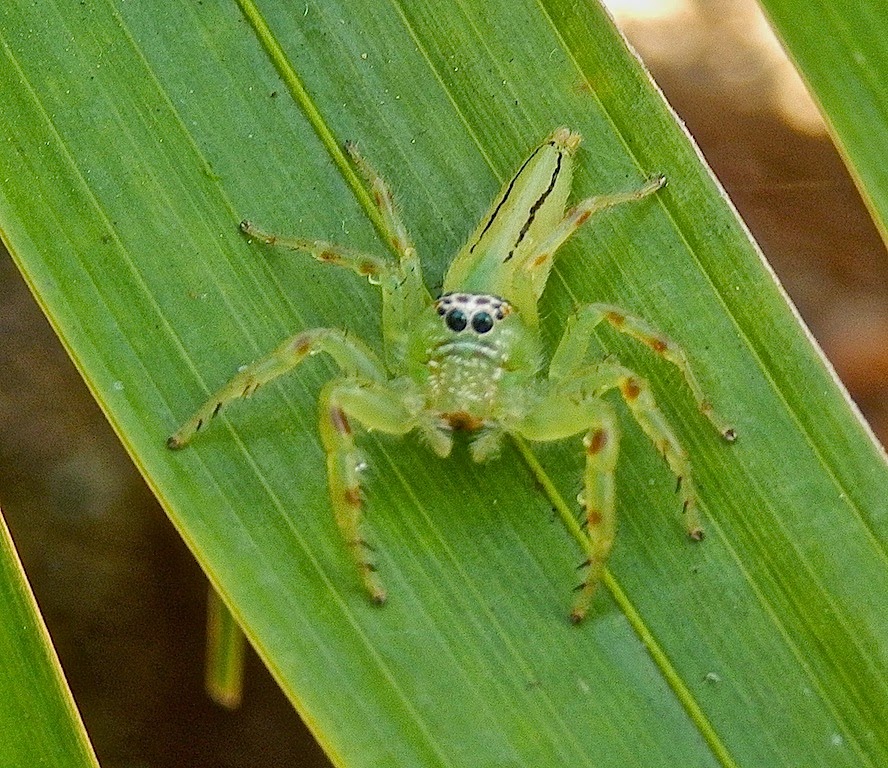 Last night I went out to see if there was any sign of the full moon, there wasn't but I found this garden orb-weaver spider he had just completed a shiny new web. The web was glistening from the fine, misty rain which adhered to the sticky, silken threads. 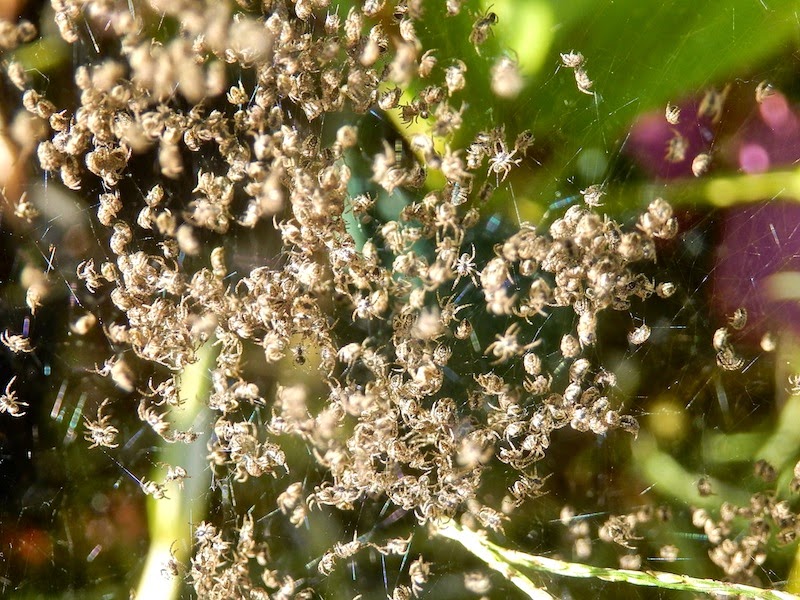 The garden orb-weaver spiderlings were growing and moulting and late this week they shifted under the shelter of some leaves. 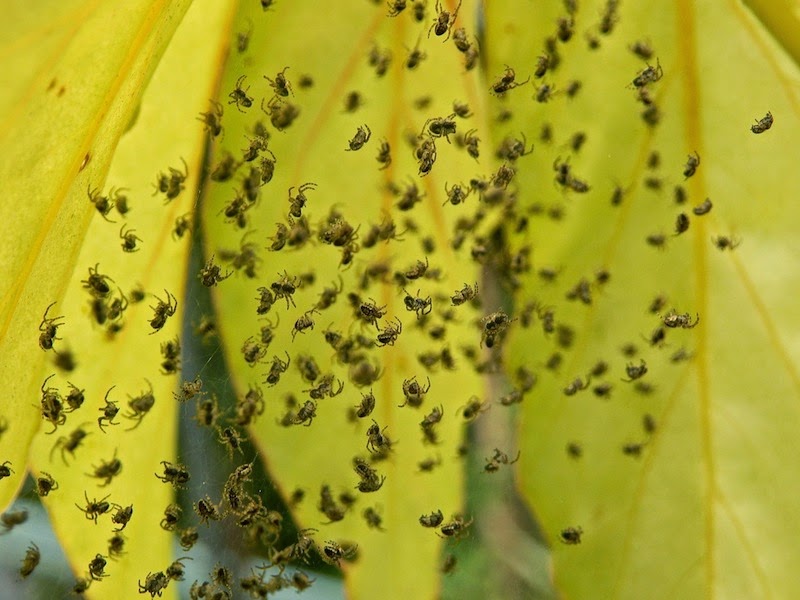 Today they were all gone, their new shelter no safer, as I could not find one surviving spiderling.
Old praying mantis or perhaps sneaky skink has made a good dinner of these tasty little eight legged morsels. 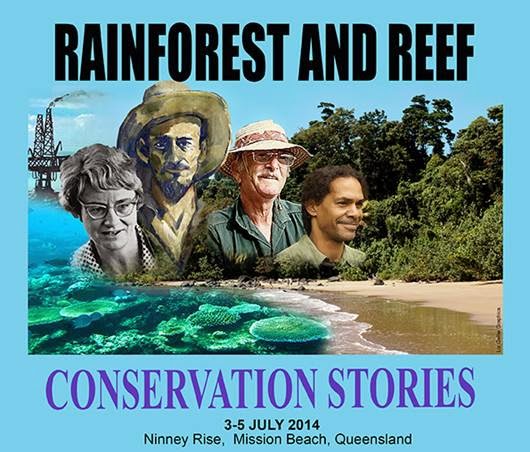 Rainforest and Reef Conference is just two weeks away.  For all the details go to www.ninneyrise.com

Hope to see you there,