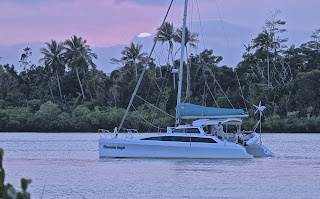 What a difference a week can make in the weather. A hot north-easterly wind has brought low humidity and dry air onto the tropical coast and overnight the grass has turned brown. A dusty smoke haze is filling the air as Queensland National Park Rangers carry out hazard reduction burns.
At sunset the sky and the Johnstone River turns an eerie dusky pink. 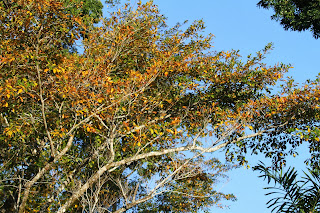 The last of the autumn's deciduous rainforest trees, the Damson plum, terminalia catapa's leaves have turned a golden brown and are falling to the ground, the leaves will quickly convert to nutrients and be taken up by the tree to produce its summer flowers and fruits.
If you are lucky to have a deciduous tree in your yard ask the tree to share some of its leaves for you to use as valuable mulch in your garden. 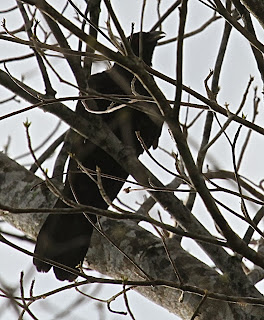 The female Indian Koel arrived this week with another male. A territorial battle quickly ensured and the new male was driven off in a flurry of feathers and aggressive high pitched calls. Unfortunately the battle occurred at some distance and even with the long lens I was unable to get clear shots. However for the record I took the following photos of the confrontation.

The two male Indian Koels confront each other. 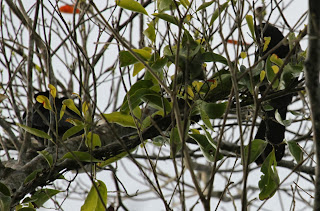 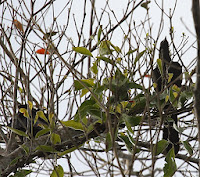 The newcomer lowed his head in submission.

That was the signal for the other bird to fly at the new-comer with a final loud, triumphant, shrill call. 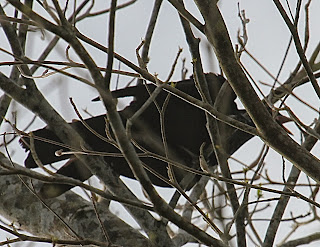 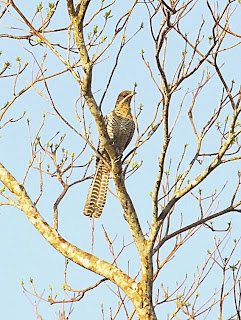 The territory and the female was now his.

My hungry lunch time visitor has returned. No sooner do I sit down to lunch then Major skink turns up. He seems to like a variety of food and is particularly partial to fruit cake. A piece of roast potato took his fancy and he demolished it quickly followed by a slice of apple. 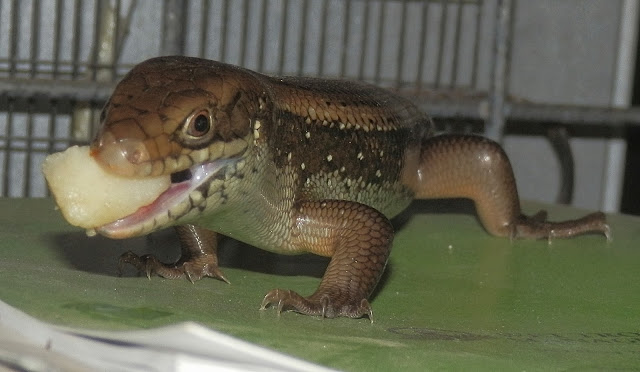 Major has been busy over winter and he has a number of offspring living in and around the nursery shop.  Major is over 40cm in length and has a hefty girth: no doubt due to his exotic diet. 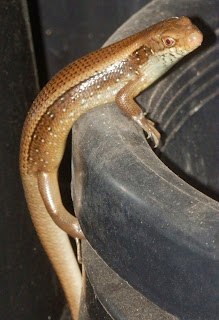 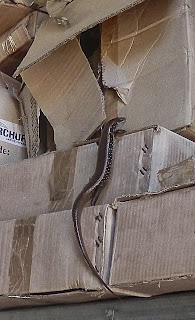 Major often startles my customers who are not used to seeing these large rainforest skinks. I think he is lovely and he is also rather partial to cockroaches which is a great advantage.

The hot dry weather has triggered the Christmas beetles into an early mating frenzy. The beetles form mating swarms where males fight over access to the female. When the female accepts the lucky male the union last for hours. 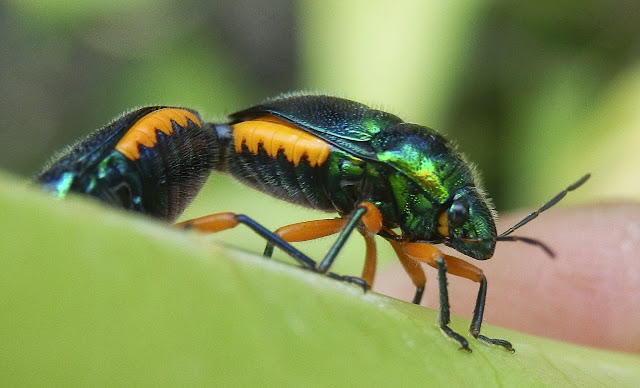 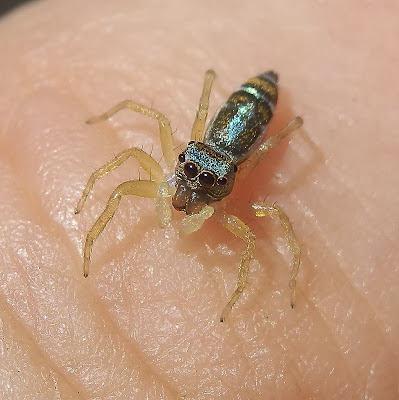 The warm weather has brought the Salticidaes, jumping spiders, out of their winter hibernation.

This week I found two more species to add to my photo gallery.  I now have photos of over 30 different jumping spiders taken at Coquette Point. However, some of them are male and female of the same species.

One can but wonder at the diversity of the natural world. How can we, with our 'runaway' population leave a place for creatures to coexist with us. 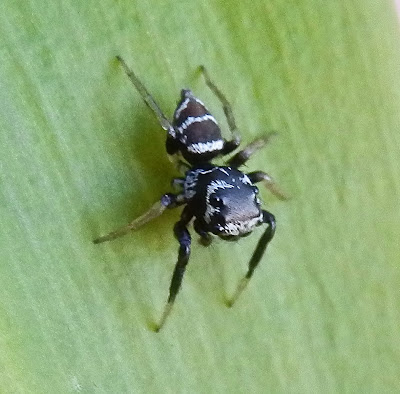 Once National Parks were set aside as a place for wildlife to survive. Even with that esoteric goal National Parks have always been a prime recreational earner for the State bringing in over 4.43b in earnings each year  for Queensland.

Now Queensland's Newman Government is planning to allow more human activities within National Parks; logging, tourism- resorts, trail bikes, horses, quad bikes, shooters and more. We criticise undeveloped countries for not preserving a safe home for their animals and now we are about to do the same. 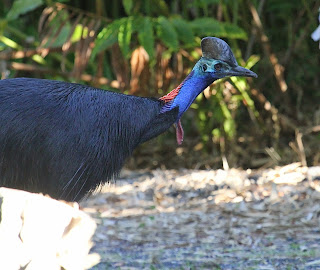 Young cassowary Quine walks down to the mangroves at the end of Coquette Point each day. When the matriarch cassowary Jessie sees her the chase is on. As far a Jessie is concerned their is only room for one female in this area and she is the dominant one.

Jessie goes to the fig tree every day to eat the fallen fruit. She carefully picks up the fig, tosses it up to the top of her beak then with a flip swallows the fruit down her throat. She repeats this action with every small fruit. She is a very fussy eater. 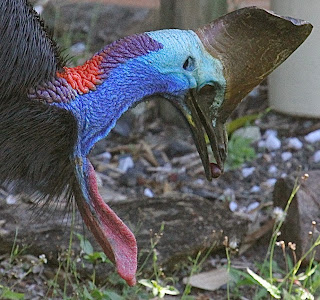 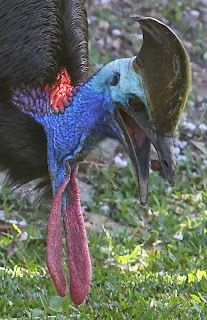 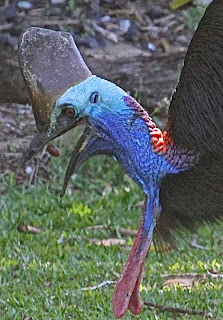 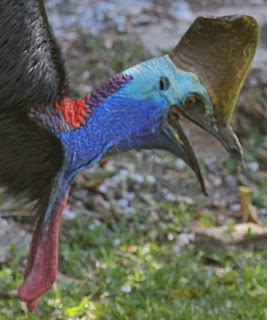 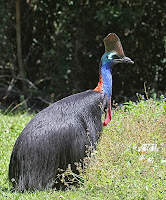 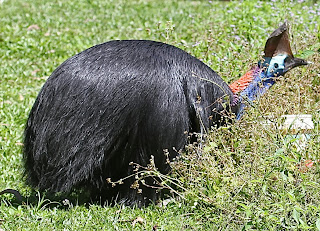 Lunch completed Jessie goes and sits down near an old bucket of water. With deep scoops of her beak in the water she raises her head and lets the water run down her neck. 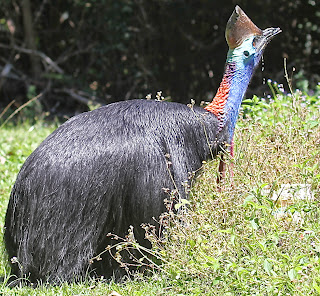 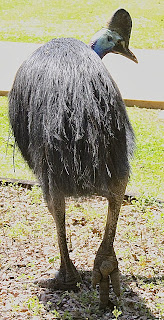 Cassowary Rosie or maybe Ross, ( by the look of the tail feathers starting to descend, I think a male bird) has been visiting the large Quandong tree, Elaeocarpus grandis, behind Ruth's L's house. 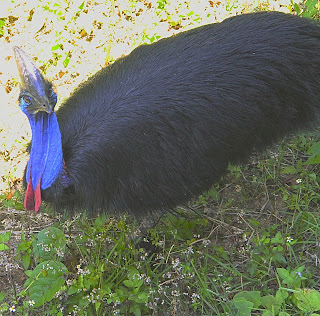 This is the cassowary that had an injured foot. When he walked away I managed to get a shot of his foot and although you can see a large scarred area there is no infection and he is walking normally.


Looking up at Ruth. 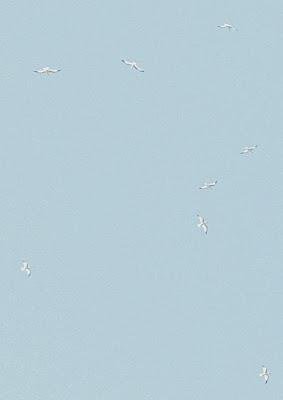 Iwas out in the nursery car-park on Monday and heard the unmistakeable sound of a bird of prey. I looked up and hovering low and moving in circles above me were, what I believe, 20 black- shouldered kites. I ran for the camera but when I returned they were ascending fast circling on a upward air current their pure white wings held motionless as the updraft lifted them high in the sky until, rising, rising they disappeared into the ether: truly inspiring
. 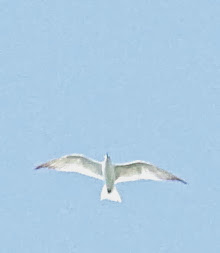 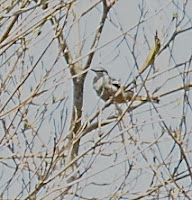 While up at Ruth's for lunch on Thursday we heard the distinct call of a boat-bill flycatcher. It was a fair distance off but you can just make out the distinct black eye stripe. Ruth advised she has heard by not seen King parrots this week. The drought in Western Queensland may force a lot of inland birds onto the coast this year, although the King Parrot has always been a regular visitor. 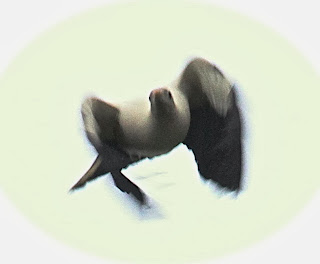 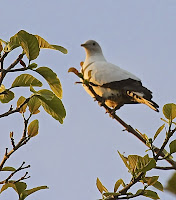 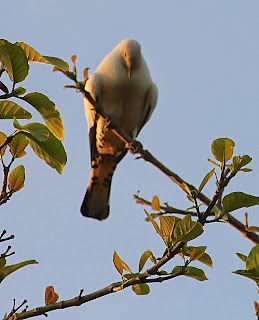 Meanwhile the Pied Imperial Pigeon is dominating the skies over the Wet Tropics. The long coos ring out from the first crack of sunlight as the birds bend their heads to puff out their song in the glow of the early morning sunrise. Then they look around to see who's listening before flying off to the rainforest to feast for the day. 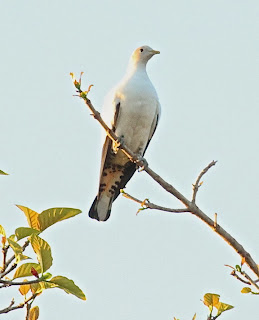 When they return through the haze in the evening, once again they head straight for the highest tree to coo to the setting sun.


Cheers for this week,