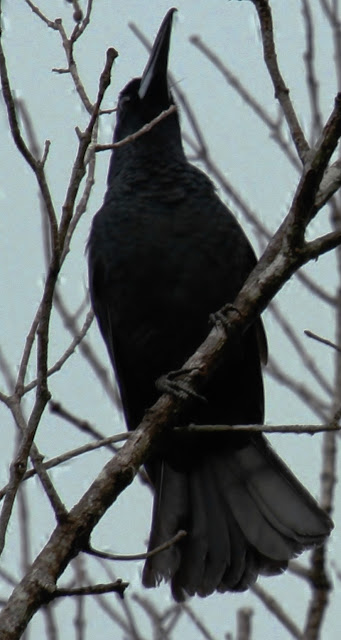 The rain has lifted and we are experiencing a taste of fine, winter weather. Celebrating the dry weather the black butcher birds are at their melodious best and from the first glow of sunrise duets of song ring out across the mangroves.

The Black Butcher Bird is a master of mimicry and the songs of over 39 different bird species have been documented as copied by the black butcher bird.

However, this bird does not stop at just mimicking other birds he includes in his repertoire the sounds of lawnmowers, reversing trucks, telephone rings and the human voice. Scientist believe the black butcher bird hears sounds in the same manner as we do.

It is believed the bird song is used to mark out territory as the black butcher bird is sedentary.  Song is also used to establish pair bonding and it is with their courtship songs  the black butcher birds achieve their ultimate vocalisations. The song is often synchronous and the unison duets are performed with the head tilted back and the chest and breast feathers puffed out. The pair react to each others performance and their pleasure will often be demonstrated with a little 'dance' on a branch only to continue their song which resound across the forest in the increasing light of dawn. What a wonderful way to greet the day! 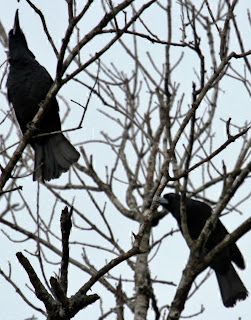 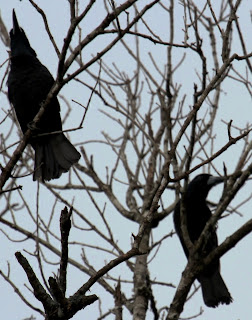 The black butcher bird nests between September and February and they build a bowl shaped nest consisting of sticks and twigs lined with rootlets. The nests are built in forked branches of tall paperbark trees between two and ten metres above the ground. 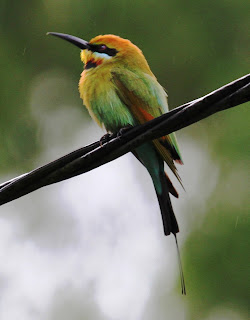 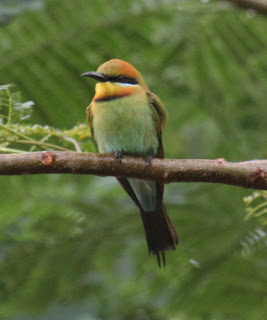 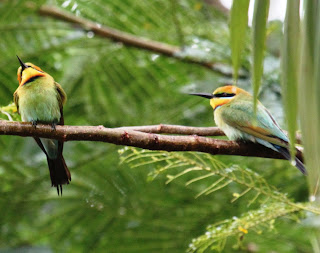 As soon as the sun warms the sky the insects start to fly and the rainbow bee-eaters are searching and waiting to swoop on any careless insect. Rainbow bee-eaters spend most of their day on the wing and need to eat large numbers of insects to support their active life, up to several hundred insects per day for each bird: now that is insect control. 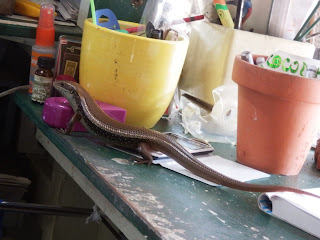 Last year Major Skink discovered the warmth of the EFT machine in the nursery shop.
The cooler weather this week has triggered the memory of a warm bed. 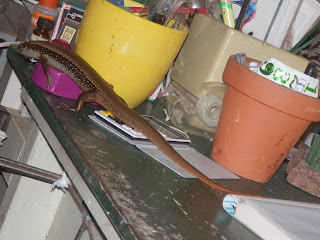 As I was closing up the shop on Thursday Major Skink turned up. Without any concern for me he went straight to the EFT machine and settled down for the night. 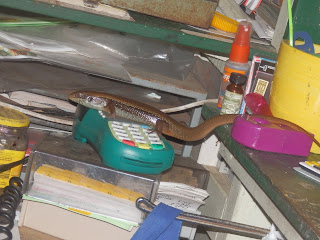 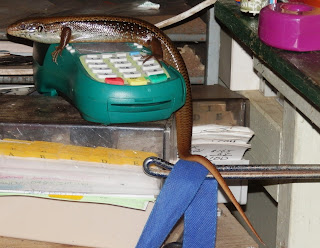 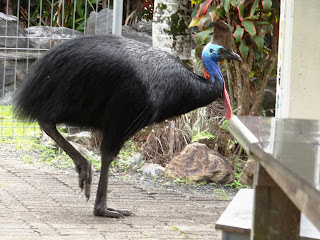 I was at Radiant Life College this week and was surprised to see a Cassowary walking around the school grounds. Radiant Life College backs onto the Ninds Creek Wetlands which is continuous with the Moresby Range National Park. I have not seen this particular cassowary at Coquette Point but no doubt some of its siblings have migrated to Coquette Point. The cassowary nosed around the school looking into the classrooms and around where the children eat. No doubt he was looking for some food scraps. To my relief I noticed the children respected the bird and moved away from it. Apparently this cassowary often takes a short-cut across the school grounds as it moves around its territory. 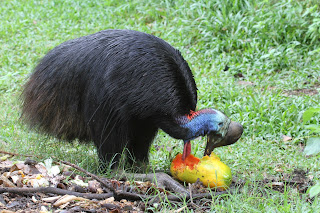 I caught Cassowary Don with a pawpaw on Tuesday. I was so cross with myself I had intended to pick it the night before and had forgotten.

I crossly spoke to Don and scolded him for knocking the pawpaw down. He looked at me and deliberately shock his head vigorously. Then he stood up and looked at me all coy and innocent. 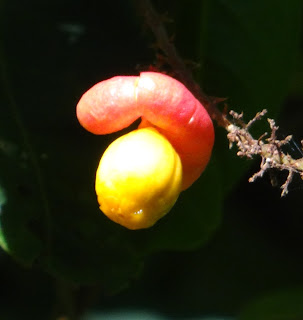 The red bell mischocarp, Mischocarpus exangulatus, is in fruit and the trees hang with their bright orange drupes which split open to revel a yellow fruit. 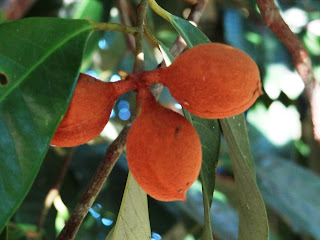 The native nutmeg Myristica insipida is fruiting at Coquette Point. This is unusual as this tree normally sets fruit in Spring. 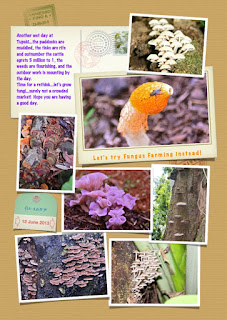 Ian Laidlaw from his property on the Palmerstone sent me
some amazing fungi photos.  The rain has even frustrated
hardened local like Ian. Thanks for the photos Ian. 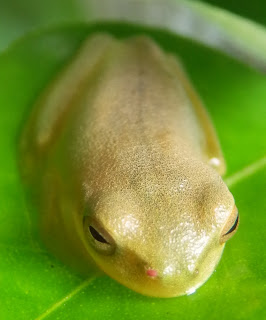 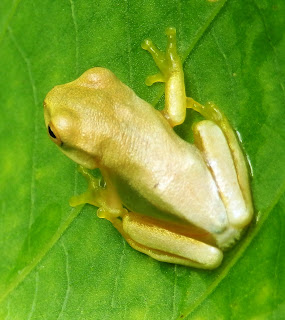 Lots of little green frogs are hopping around the nursery
and I noticed a red mite on some of the frogs. Can anyone
identify this creature and is it a problem or a food for the
frog?

Bill Farnsworth has identified the mite on the frog as a 'red velvet mite' an interesting little critter. Thanks Bill.

Until next week cheers,