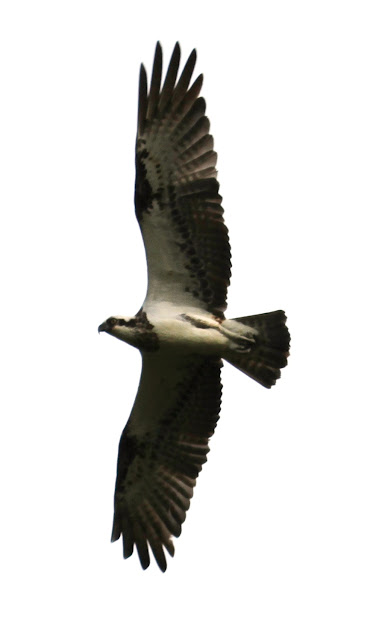 The skies over Coquette Point are ringing with the shrill whistle of courting hawks.

The Osprey have completed the refurbishing of their penthouse suite which is neatly nestled in the fork of a dead tree. The nest site has  unencumbered views over the Johnstone River Valley to the West and an ocean view over the Coral Sea to the east giving the occupants easy access to both fresh water or salt water fish as they so desire.

Osprey live exclusively on a fish diet. Their hooked talons are very sharp and the toes have spiny projections. They dive feet first into the water, snatch the fish and carry their slimy, wriggling meal either back to their nest or to a nearby tree.

A few months ago I watched one osprey standing in the ocean  on a sandbar which was completely covered by the incoming tide, the water would have been a good 30cm deep and small waves were breaking around the osprey however this did not deter this avid fisher.

The wing-span of these amazing birds stretches 1.75 metres and when the wings are folded they reach the tip of the tail. 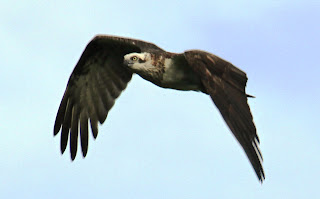 Most Hawks and Eagles can easily be recognised in flight by the shape of their tail feathers, which differ in shape in most species of hawk and eagle.

The female osprey is larger than the male and the dusky band or necklace on the fore neck of the female is strongly marked easily identifying her.

Osprey nest from May to September and build large platforms with a mixture of sticks held together and lined with seaweed. Last year, shortly after the eggs were laid, the nest of the Coquette Point pair was destroyed by a large goanna. Osprey usually lay three eggs which are pale buff, blotched with reddish-purple markings. 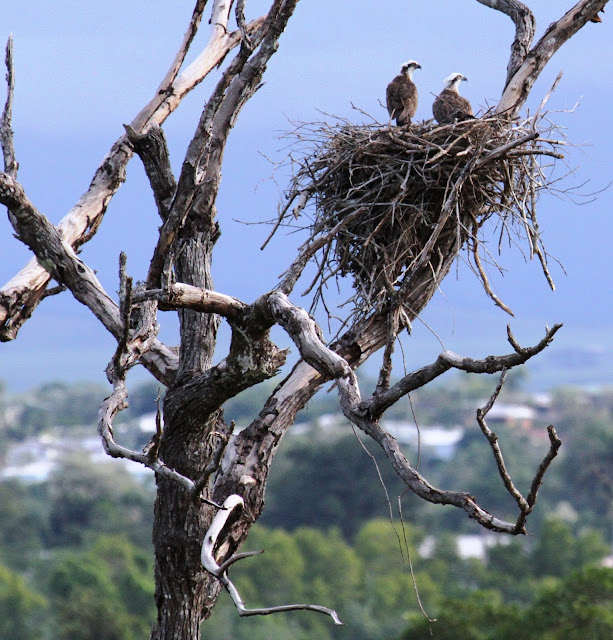 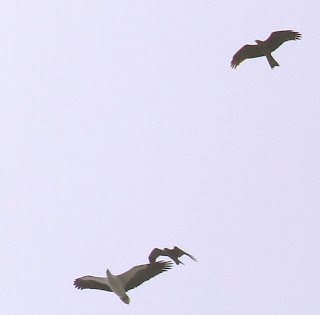 White breasted sea eagle is also very active at the moment. She has her nest at the top of a large paperbark tree in the Coquette Point wetlands. A pair of black kites are continually harassing her and perhaps she has an eye on their chicks. White breasted sea eagles will feed on a wide range of animals as well as carrion. Whereas the black kite lives almost exclusively on large insects but will eat carrion and hunt mice. Black Kites are commonly seen cleaning up insects and rats in cane field during and after harvest. Unfortunately, as with all raptors and owls they are often inadvertently killed when rat baits have been laid and the birds eat the poison meal.
Note the distinctive difference in the shape of the tail feathers of these birds.   On the left two black kites harasses a white-breasted sea eagle. 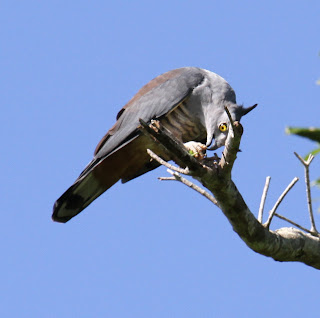 Crested hawk is enjoying the sunny weather and much to my distress has been living on a diet almost exclusively of frogs. The wet weather over the last month has been ideal for frog breeding.

I noticed five crested hawks actively hunting in the Coquette Point wetlands this week. This area appears to be very productive and favoured by the hawks as these birds have remained in the area for the last twelve months. In the past the crested hawks left Coquette Point in summer and returned in Winter. Crested hawks breed in spring. 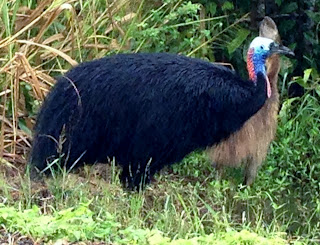 Cassowary 'Brown Cone's' lone chick has grown quickly and Rakesh Krishnan kindly sent me this photo he took of Brown Cone and his chick on Friday. The chick appears to be staying close to dad and lets hope he learns some road sense as the area where they hang about is the long bend in the road near Ninds Creek. 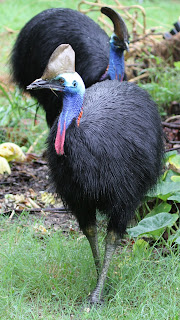 The courting cassowaries Snout and Jessie have gone into hiding and I have not seen them all week. Hopefully in sixty days Dad will turn up with chicks. 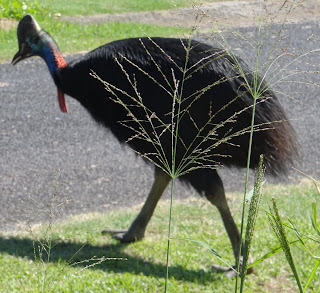 I saw young cassowary Rosie this week and her foot has completely healed. She is walking normally and there is no sign of swelling in the pad. She regularly crosses the road at the top of the range walking from the melaleuca swamp down into the mangroves on the river bank. 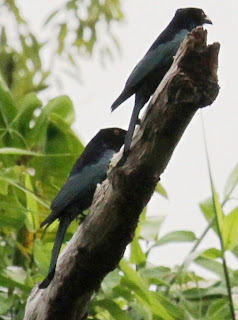 I was watching a pair of spangled drongos perched tensely and on the look out for a meal. Their long tails were pressed hard against the branch where they were perched when suddenly they catapulted themselves into the air and one of the birds caught what looks like a giant mantid. Deftly he killed the struggling insect and before his mate could challenge him for a share of the meal he swallowed it down in three quick gulps. 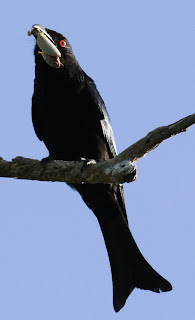 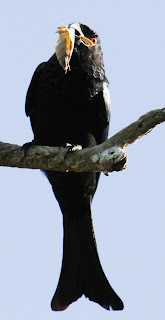 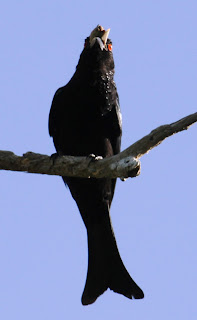 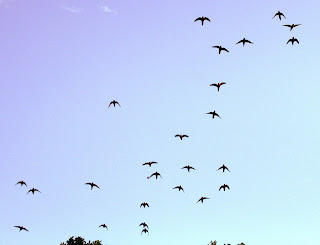 The Meleleuca leucadendra, paperbark trees are in flower again and large flocks of rainbow lorikeets are noisily feeding on the rich nectar oozing from the flowers. The lorikeets fly in waves coming and going from tree to tree, much to the delight of visitors to the nursery this week.  When the sun reflects on their feathers the lorikeets gleam and shine reflecting all the colours of the rainbow on their wonderful feathers. 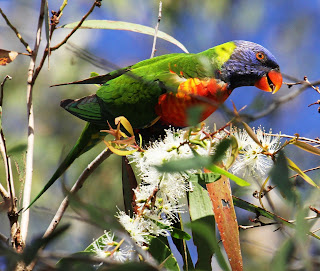 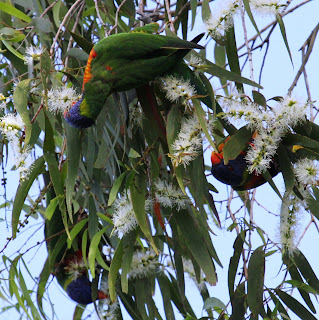 Shimmering in the skies over the Johnstone River the day flying moths are performing courtship dances. when the light catches their scales 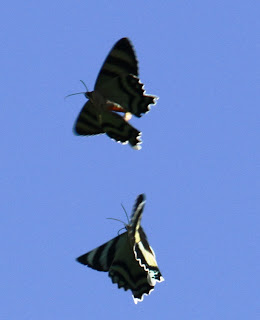 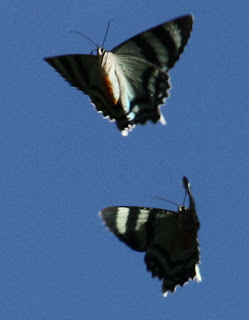 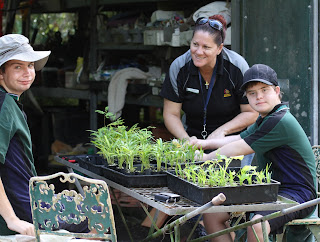 I had some happy, willing helpers in the nursery this week and with Louise help they learnt to weed seedlings. Gary and Ethan enjoy gardening but they were absolutely delighted with the antics of the rainbow lorikeets and butterflies. 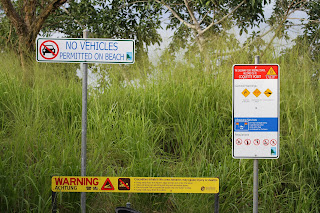 A new sign has appeared at the end of the Coquette Point road, 'No vehicles permitted on beach'. It would be nice if the pictograph also showed quad bikes and trail bikes which are the vehicles using and damaging the beach and the dunes.

Before I go a very big happy birthday to my dear friend Liz Gallie at Mission Beach. If you have time click onto Liz's blog http://missionbeachcassowaries.com. for some wonderful stories and photos of cassowaries and also the latest on Mission Beach. Enjoy the day Liz and thank you for the enormous contribution you give to all of us by speaking out courageously on behalf of all creatures and the environment of this area.
Cheers, Yvonne
Posted by Unknown at 03:54